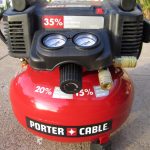 At HomeFixated, we love pneumatic tools. Whether it’s a precise 23 gauge pin nailer, or a versatile palm nailer hammering in framing nails Scarface-style, air powered tools are a blast (literally). Since you can’t just blow into the back of a nail gun and make it shoot nails, having an air compressor is a necessary evil. I say evil mainly because air compressors are notoriously loud, heavy and not particularly easy to move around. Not into loud, heavy and stationary? Read on for our review of the Porter Cable C2004 Portable Air Compressor. 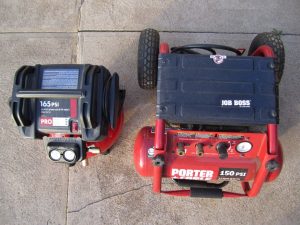 A few years ago I bought a Porter Cable compressor that can be rolled around on two wheels. It was a great compressor, but I always felt it was a bit overkill for most projects, especially when I had to lug it up a flight of stairs. Despite its relatively small size and wheels, the compressor weighed a ton and was a pain to maneuver in tight spaces (like most our house). When Porter Cable sent us their pancake style C2004 compressor to review, we were excited to see how it stacked up. Allow me to state the obvious: the C2004 is substantially smaller.

At 29 pounds, the C2004 is very manageable to carry in one hand. Not quite like curling a six pack of your favorite suds, but it’s definitely light enough you won’t hesitate to move it from the shop to the house, or into your truck. A beefy integrated handle spans the top of the compressor, making gripping the C2004 a no-drama event. There is also an integrated power cord stowage area on the side, something you’ll appreciate when you’re not tripping over a loose cord while moving the compressor around. The C2004 has a typical control panel with a tank and outlet pressure gauge. Two quick connect hose couplings angle off at 90 degrees, making it easier to keep two hoses from becoming a tangled, oversized macrame project. A regulator knob lets you dial in the optimum outlet pressure (the regulated pressure rating is approximately 3-150 PSI).

While the noise from the C2004 isn’t likely to lull you to a relaxing sleep, we did find it to be noticeably quieter than our previous compressor. We took some sound readings and found our old compressor came in at about 91db, while the C2004 was around 85db. Porter Cable lists the Noise Level as 75.5 dBA + according to “ISO 3744:1995” testing. We have no idea what the ISO blaw-bitty-blaw test setup is, but our levels would drop closer to 75db if we moved our measurements about ten feet away. We’re still looking for a super silent portable compressor, but until then, the noise level from the C2004 is not bad. However, if you’re working right next to it, hearing protection is still recommended.

Since the C2004 compressor has relatively low draw, it can operate on a typical 15 amp circuit. If you’re used to lugging around a more massive compressor only to blow the circuit as soon as it fires up, you’ll like that the C2004 isn’t particular energy thirsty. It’s also an oil-free design, so you won’t find it thirsting for oil either. Saudi Arabia will no doubt curse this model. In terms of how hard you can push it, Porter Cable recommends an average duty cycle of 50%-75%, with the air compressor pump running no more than 30-45 minutes in a given hour.

If you’re looking to power a variety of nailers and relatively low volume pneumatic tools, and you want to stay nimble with a portable, unobtrusive compressor, we think the C2004 is a great solution. You can find the Porter-Cable C2004-WK 4 gallon Oil-Free Pancake Compressor with 25-Feet PU Hose and Fittings

for a very reasonable $199 at Amazon.