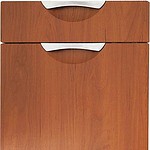 What’s hot is in the eye of the beholder, and since I live in Southern California, so does the beholder.  And it’s really a subjective thing, so what’s trendy in Beverly Hills may not be so much a few miles away in Big Bear or Lake Arrowhead.  Let me focus this article on what I know best, so let’s look at what’s cutting edge in the circles of the rich and famous.  And look quick, because trends change faster than Charlie Sheen’s publicists.

Hardware and accessories are changing and improving so fast you really have to keep on your toes if you want to keep up with everything.  Innovations are coming fast and furious from Europe, and the elite expect only the best, as well they should, shelling out hundreds of thousands of dollars for architects and designers.  And those creative types do their job well, specifying the latest in bells and whistles – everything from pocket door hardware to pantry pullouts.  These detail items have evolved and are evolving faster than ever.

As to be expected, some innovations are by their very nature untested for every situation.  Blum makes an awesome drawer opener that works with their self-closing blumotion hardware, for example.  The drawer slide has a soft close that slowly pulls the drawer shut so the face stops on a 3mm spring loaded spacer.  To open the drawer, you just press against the drawer face, activating the Blum Servo Drive unit that’s been installed behind the drawer box.  When activated, it throws the drawer open. To see the Servo Drive in action, you’ll need to brace yourself for the soundtrack on this video:

Sounds great (the idea, not the soundtrack), works great, but here’s what happened at a meeting we had at the job site.  We were all in the kitchen admiring our bitchin cabinetry – OK, there might have been a job meeting going on at the same time – where five or six of us were leaning back against the countertops.  When we leaned forward to leave, five or six drawers all opened up!  Don’t know if the testers in Austria ran across that one.  But hey!  These are the rich and famous. They don’t hang out in the kitchen anyway.  And the hired help should be working, not slouching around activating Servo Drives!  Problem solved!

Sleek, European style cabinetry and furniture is so 90210.  But Euro cabinet companies like bulthaup and SieMatic no longer rule the roost as their location alone is problematic for fast turnarounds and replacement items.  Other makers like – ahem – Miller Woodworking (where I work) – now turn out Euro style work of equal or even better quality.

“Exotic” veneers are still very much in, but are not necessarily really exotic. Plantation grown for a future of sustainable growth, lots of previously scarce and difficult to obtain veneers are more plentiful and aren’t coming from decimated forests anymore.  So being able to one-up the Jones’ with their FSC (Forest Stewardship Council) certified veneer cabinets, paneling, and furniture during pleasant dinner or cocktail party repartee is a coup that many of our clients can look forward to once their project is complete.

Another cabinetry trend is horizontal grain direction in cabinetry and wall paneling.  Beautiful veneers such as Australian walnut and rift white oak are stunning, run horizontally in kitchens and baths.  With beds, night stands and coffee tables made out of the same veneer, everything ties together to really make an awesome package.

Suspended Pullmans and vanities are also in high demand these days.  They look like they’re floating on the bathroom walls and may even be set off the back wall six to eight inches.  This brings out the thinking caps to figure out how to hide support brackets while at the same time holding up the three-inch solid limestone countertop.  Reinventing the wheel is a frequent part of these high ticket jobs.

While some look at this kind of sleek, clean, Euro look as cold and unfriendly, others see the exact opposite.  As I stated earlier, the beholder lives here and the beholder says some of these homes just make you wonder, “Who thinks this stuff up?”  They can be absolutely amazing.

There’s certainly still a place for the Lindal Cedar Home – just maybe not in this zip code.