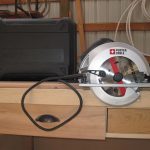 When I am sent something to review, I get a little evil.  It is akin to playing with house money.  The tool didn’t cost me anything–and I’m just “out” my time.  Small loss.  Considering most of the time I’m just screwing off, or being a nuisance in general anyway.  It is work so to speak–but I get to play with cool tools, and try to find things wrong with them–and break them.  It’s kind of a dream job, really.  (Don’t tell Marc).  One of these cool tools is the Porter Cable PC15TCSMK.

Porter Cable recently sent HomeFixated one of these circular saws to review, and as expected:  It’s great.  Full disclosure:  I like Porter Cable.  I own a few of their tools, including a recent Porter Cable table saw acquisition. 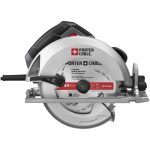 The Porter Cable PC15TCSMK is your standard 7 1/4 inch sidewinder circular saw.  It is light, powerful, and has a 10′ cord which makes a difference believe it or not.  Nothing is lamer than going to make a cut–and pulling your saw off its power.  I prefer worm-drive saws–but that is for pro building.  I hate lugging that thing around when I just need to make a cut or two–so the Porter Cable has been a treat.  When you’re using your saw literally hours a day–you need the power that a worm drive brings.  If you’re a DIYer,  or even a fledgling pro, the Porter Cable will be everything you need and more.

I tried to come up with things I hate about it–but there really isn’t anything to say.  The saw performs as I would expect it to–and I could use it on a framing crew with no problem.  The extra long cord is really nice–and the case is great too.  Good on Porter Cable for including it.  My worm drive saw didn’t come with one–so I bought one.  I don’t feel like I should have to buy an extra case to protect my tools–but it’s necessary.  Especially when they ride around in the tool box of my truck.  Probably doesn’t seem like a big deal–but the case keeps it clean, keeps my saw wrench and rip guide out of the way but close, and it’s a lot easier to store and stack cases than a loose saw.  While I am on the subject, Saw manufacturers:  We don’t need a rip guide.  We use table saws anyway.  Spend the production money on better cases and cords.  Thanks.

The included blade is about what you’d expect.  You’re not going to trim out a house with it–but it’s serviceable.  I prefer Freud blades, and once I get the requisite use out of the Porter Cable blade, I’ll switch it out, but it’s just fine.  I’ve been cutting rough sawn lumber with it, and it saws like a champ.  Sure, it blows out a bit–but that’s what I expected and frankly don’t care on the rough sawn.  For something finer you would need a different blade–but circular saws really shouldn’t be your first choice for finish work anyway.

Porter Cable just makes good tools.  And–at the end of the day, that is what I need.  I get paid to do a job, and I rely on my tools to get paid.  So, I expect that when I spend my money on a tool they give me value for the money I spend.  The Porter Cable saw does that.

If you’re in the market for a good all around performer of a circular saw:  Take a look at the Porter Cable.  You can find the PC15TCSMK at Lowes for about $90, that’s a Franklin well spent.