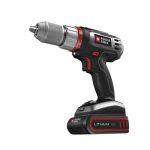 A couple of month ago I bought this cordless drill for work because our Milwaukee Drill had given up the ghost. Apparently they are not meant to be left outside in rain storms (although you would think if it were so important it would be written somewhere on the drill). I wasn’t looking for the top of the line because chances are that we would end up leaving this one outside as well.

I have to admit I was pleasantly surprised. We spent 180 bones but that included the $20 warranty and it may be the most powerful battery operated drill I have ever used. Since we’ve purchased it, we drilled through concrete, ran self-tappers through 3/8” steel, drilled into asphalt and concrete and have yet to meet a challenge that the drill has wimped out on.

Just so you don’t have to take my word for it, here are some specifications. The drill itself weighs under 4 pounds, has 24 different clutch positions, two gears to control the torque and has a ½” chuck. Most importantly though, it produces 360 in. lbs. which is more torque than nearly any bearded lady at the circus (outside of Olga and Helga the Asimov twins). What more can you say… Well I have more. 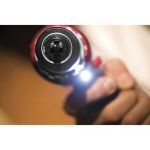 Not only does it have enough torque to choke a turkey, but it also comes with an LED light that comes on as soon as the trigger in engaged and lights up the drilling area. So, even if you’re drilling in the dark or shadows you can see the screw head to drive it in straight. Also the charge time is comparable to any other cordless drill I have used, and battery life seems longer than most of the drills I have used (although admittedly I haven’t run tests to verify it).

There are two things that will say I am unimpressed by. First, because of the torque and speed if you back off of the trigger and then run it hard several times consecutively, like you might drilling in a long screw in a tight space, the chuck can work loose of the bit. Secondly, it comes with a man-purse and not a hard case. I mean really, as much as I drop tools they should come wrapped in Kevlar not in nylon, plus who wants to walk around with a purse over one arm and a nail gun in the other, it sends mixed signals. 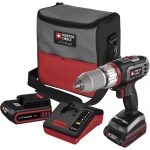 Outside of that I must say I’m impressed. While it costs a few more shekels than a Black and Decker, the Porter Cable will drive a screw through oak faster than I can get through a Burger King Whopper! If you’ve seen me eat a Whopper then you know we’re talking some serious speed here. If you’re ready to buy, you can find the PORTER-CABLE PCL180DRK-2 18-Volt Lithium-Ion Cordless Drill Kit