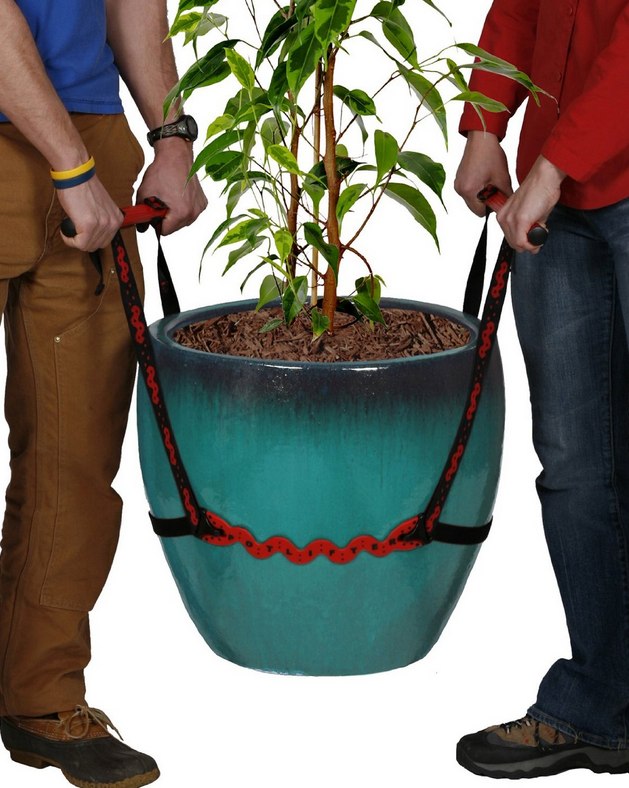 In this article, we’ll be discussing the PotLifter. No, not that annoying guy in your college dorm that made off with your substantial supply of research-grade, medicinal marijuana. Instead, we’re talking about PotLifter, the product. Earlier this year I was cruising through the garden and landscaping section of the National Hardware Show when I found the PotLifter booth. It was there that I apologized for what might be our longest turn-around time on a product review. I actually discovered the PotLifter at the 2011 National Hardware Show, where I was impressed with a hands-on demo. The PotLifter is a simple tool that promises to end the back-breaking work of moving around large pots (and other similarly awkward to lift heavy items).

The PotLifter is produced by cryptically-named PotLifter, Inc. They’re a friendly husband and wife dynamic duo that apparently got sick of lifting pots the old fashioned way, and did something about it (other than hire a laborer). Since we have a LOT of heavy pots around here, we thought we’d be ideal candidates to test the sample PotLifter they shipped our way.

Prior to reviewing the Pot Lifter, my chosen method of transporting heavy pots around was my high school-era skateboard. This was problematic for a few reasons: 1) It messed up my radical skateboard 2) I could only transport in straight lines and 3) I still had to lift the huge pot onto and off the skateboard. Since some of our potted plants aren’t particularly soft and cuddly (our Sago Palm that regularly shishkabobs me comes to mind), the old skateboard transport technique left a lot to be desired. That beautiful but evil aforementioned Sago Palm recently outgrew its home next to the family BBQ. I had been impaled by its needle-like leaves one too many times while cooking up dinner. When we planted it, the cute little Sago didn’t even extend beyond the perimeter of the pot. The problem now was that its spiny tentacles extended WAY beyond the perimeter of the pot. The pot was hard to lift back when it was still a Sago baby, but now the pot couldn’t even be dragged without injury. This seemed to be the perfect test case I was waiting for with the PotLifter. The PotLifter has a relatively simple design consisting of two handles, lifting straps and the patented grip strip. Actually, we have no idea if the grip strip is patented, but if you attempt to steal it expect to get an intimidating letter from PotLifter Inc’s team of cutthroat attorneys. Each end of the grip strip has a ingenious quick-release snap that opens like you’re breaking a twig. I of course tried opening one from the wrong side and found it difficult. Once I realized I was doing it in the wrong direction, opening the buckle required very little pressure. To lift our pot and ruthless Sago, I carefully ducked under the spines, wrapped the grip strips around the pot, crawled back out, and lifted (with the help of my lovely wife). It should also be noted that most of the photos in this article were taken by our five year old daughter, who is now the youngest online tool / home improvement publication photographer on record. Once the straps were in place, lifting and carrying the pot and Sago was decidedly comfortable. Don’t forget that whole “lift with your legs and not with your back” advice. The handles are cleverly designed so each person can use either one or two hands to carry the load. You can even adjust the length of the lifting straps with a simple but effective pull on the two “D” rings built into each handle. With a load capacity of up to 200 pounds and 30 inches in diameter, the PotLifter is very versatile. The PotLifter isn’t just a one-trick pony. In addition to large awkward pots with killer-attack Sago palms, you can also transport small boulders, bags of soil, concrete bags, and maybe even multi-kilo bales of . . . nevermind. The only real downside to using the PotLifter is that you’ll need a second person to help you out. Then again, maybe that’s not a big downside if it saves you a hernia surgery or just adds some companionship to your otherwise solitary labors in the yard.

If you’re serious about pot lifting, avoid the DEA and simply buy yourself a PotLifter. It’s easier on your back and shouldn’t result in any jail time (local or federal). The PotLifter is one of those great simply-designed products that we love to stumble upon at HomeFixated. You can find the PotLifter Gardening Heavy Lifting Tool

for a bargain $22 on Amazon.com, where it currently enjoys five star rating status.