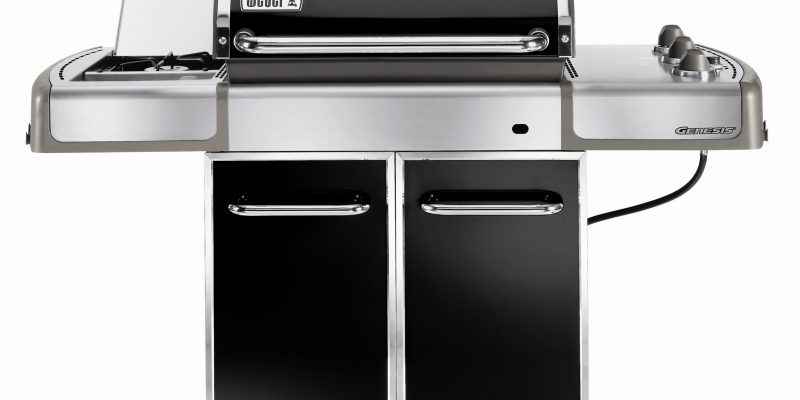 A while back we wrote an article about Lite Cylinder, an innovative see-through propane tank. Lite Cylinder attempts to alleviate some of the woes associated with the common propane powered BBQ. That got us thinking about natural gas BBQ’s, and in particular, the highly regarded Weber Genesis E-320. Weber graciously agreed to send us the E-320 to review. We’ve been barbecuing like maniacs since and have learned quite a few tasty things in the process.

Your first dilemma in purchasing a new Weber grill may be deciding between the all stainless steel vs painted exterior. According to the 21st Annual Weber Grill Watch Survey, color is now the top finish preferred by American grill owners for their next grill purchase at 43% – up from second place last year at 34%. Black is second at 35% (which I consider a color by the way). Stainless steel has moved to third at 33% vs. being most preferred last year at 37%. If you’re opting for the natural gas version of the Genesis E-320, black is your only color option. If you opt for a propane model, you can also choose from green or copper. With the caveat that I love black in general, I think the black finish on these grills looks great, and blends well with just about any house-vibe. With more painted finish on the grill, the colored models are far easier to keep looking clean than the entirely stainless finish, which is good if you’d rather be grilling than cleaning. Weber assures us that both the painted and completely stainless finishes weather extremely well with proper care.

From the exterior, we move inside to the great stainless steel vs. porcelain-enameled cooking grates debate! There seem to be two general camps when it comes to preferred grill surfaces. Some people swear by stainless. More often than not, those in the stainless grate camp really focus on ease of cleaning the grate. Those who favor porcelain-enameled cast iron tend to do so because of how well these grates retain heat. Cast iron is well known for it’s excellent heat retention and very even heat distribution. Better heat retention also translates to more ideal sear marks on your food. So while stainless gets high marks for cleanliness, I’m more biased to cast iron and sear mark prominence. Without sear marks, you may as well be steaming your food, which lets face it, isn’t nearly as primal as barbecuing. No offense food steamers. 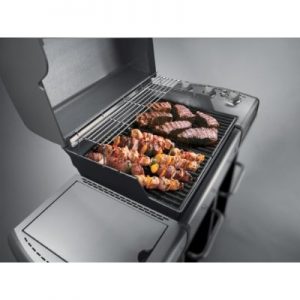 Now that you’ve pondered the look and internals of your BBQ, lets get down to what fires these babies up: natural gas vs propane. I like natural gas (no blue flame jokes here please), but there are definitely some pros and cons to consider. Natural gas means you’ll never run out of gas. . . . ever. Unless of course a terrorist sabotages the gas pipeline supplying your municipality. It also means you’ll never have to bother with errands like “refueling my propane tank”, “buying a new propane tank”, or “wiggling my propane tank to see how much gas is left.” You’ll also never have to explain why dinner is mostly raw because you forgot any of those errands before your BBQ party. Awkward! The downside to natural gas? You’ll likely need to run a gas line to your preferred BBQ site. And once you do, you won’t be wheeling your Genesis E-320 far from that gas line.

Propane people, don’t feel too hated on. I know you make up most of the population. Although you have to contend with intrusive thoughts of running low on gas and tank refilling, you have a couple advantages. There’s no gas line installation to worry about, and you can roll your propane Genesis around your yard to site that day’s ideal cooking spot. Maybe it’s a choice piece of shade you’re after, or that area right by the beer cooler, or that spot with the perfect view of your supermodel neighbor’s yard. With propane, you’ve got a little mobility and a much easier install. Since I’m all for avoiding intrusive thoughts as well as errands, I’ll stick with natural gas personally. Plus, I like the idea that I could just grill 24/7 and never run low on fuel. . . just in case.

So how about the BBQ itself? First, let me say it’s clear Weber puts a little effort into packing their precious products. All too often, companies that ship large products just throw them into the box, add a couple packing peanuts and hope for the best. Weber, on the other hand, meticulously packs their BBQs so parts are lovingly isolated and protected. This makes opening your box much less likely to result in that heart-wrenching moment when you realize your new BBQ is dented or damaged. Assembly was straight forward, and took me about 2-3 hours solo. I was taking my time, and occasionally whispered sweet nothings to some of the more beautiful parts while assembling. That’s normal for a guy, right? 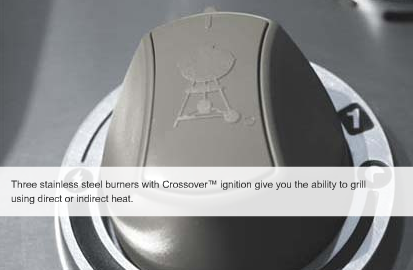 The Weber Genesis E-320 grill definitely has a sleek look with its porcelain-enameled hood, corresponding painted steel doors, and stainless steel trim and handles. Under the hood, its rated at a fiery 42,000 BTUs with three stainless steel burners and a total cooking area of 637 sq. inches. An electronic Crossover ignition system fires things up easily. A battery powered ignite button kicks on the first burner very quickly. There’s no awkward “hold lit match at arms length and hope you don’t cause an explosion” routine here. Your arm hairs will all stay intact. The 2nd and 3rd burners ignite automatically from the first burner when you turn them on. A center-mounted thermometer keeps you aware of temperatures at a glance. If you’re cooking really meaty goodies, you might also want an internal thermometer to monitor your meat’s doneness.

The Genesis E-320 grill also features a 12,000 BTU flush-mount side burner. A “friend” said, “what do you need that for, isn’t your kitchen right inside?” Well duh, but a side burner doesn’t require that I leave my official circle of comfort by the BBQ. If I were to venture back into the kitchen, my barbecuing flow could be interrupted by any number of indoor distractions. Nothing should come between a BBQ chef and cooking, other than a beer and tongs of course. Plus, the side burner on the E-320 really cranks! Whatever you’re heating on there won’t take long. I think it’s handy to have, and when you’re not using it, a stainless hinged cover makes it a convenient prep spot.

I conducted several trial runs to put the E-320 through it’s paces. . .

Trial 1: Carne Asada. We’re in San Diego, which means it’s basically law that christening a new barbeque must be done with carne asada. The E-320 produced even and hot cooking. The three separate burners make it easy to heat only the part of the grill you want. Weber suggests running all three burners for the initial warm-up, and then turning off burners you don’t need.

Trial 3: Turkey Burgers & Grilled Onions. As a culinary side-note, definitely a step up from turkey brats. Nice grill marks which I again partly attribute to the cast iron grills. If you’re adventurous enough to BBQ a full turkey or other bird, the three burner configuration lets you turn off the burner under your bird so you can do a nice long extended indirect cooking session, without direct heat burning your meatier meals. Weber also makes an optional rotisserie which I haven’t checked out yet.

Trial 4, Epic Fiesta: Carne Asada, Pollo Asada, Bell Peppers, Asparagus, Zucchini, and Green Onions. This was the first time I actually exceeded the total grill capacity (by trying to cook everything at the same time). However I was cooking a lot of dishes for about 10 people. I might have pulled it off in one shot if I had made better use of the secondary upper grill. On this trial I had all three burners running, which made a noticeable difference in both how fast and how high the internal temperature reached. Everything turned out great, and cooked up super evenly and fast. I won’t mention I overcooked the zucchini a bit. 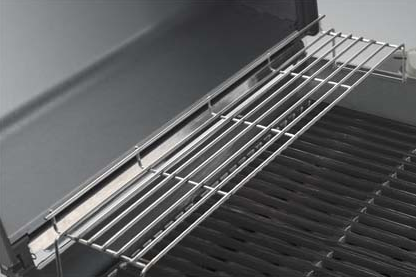 Two accessories I’d recommend right off the bat, are a Weber grill cover and grill brush. Some of the earlier grill covers for the Genesis series had vents in them that people complained let in debris and water. Since then, it looks like the newer covers are sans vents, and as a result, do a much better job of keeping the elements out, which is kinda the idea behind a cover in the first place. Since the grates in the E-320 are enameled with porcelain, I’m not a fan of using a metal scraper to clean the grates. Chipping porcelain would be sad. Instead, I use a Weber wire brush, which makes quick work of cleaning the grills. I also find spraying a little cooking oil onto the grills before firing up the BBQ makes for easier grill cleaning later. Just beware of spraying while the barbeque is on since you can get a flame thrower effect that can indeed cause rapid arm hair loss. Losing hair while barbecuing is not cool.

So is the Weber Genesis E-320 total barbecuing nirvana? We think it’s pretty close, but there is one area we think could be improved on: the side-mounted ignition assembly and burner control knobs. Having prep space or, at minimum, a place to set down food is really helpful when grilling. The left side of the E-320 makes for a very convenient prep space, if you’re not using the side burner. If you are using the side burner, then you’re left with a little bit of space between the burner knobs and the side of the grill on the right side. The knobs simply make placing much of anything there impractical. Weber does feature a line of grills (the Summit series) with the controls front mounted, but you’ll need to step up budget significantly. In addition to front controls, the Summit series features some upgraded spec’s, such as beefier diameter grills, and more stainless steel internals. Depending on your side burner use, you may need a little extra horizontal space in the form of a table or cart nearby.

If you do some hunting of reviews online, you’ll find the Weber Genesis series barbecues very favorably reviewed, and with good reason. These are solid, well-made grills, designed to cook great and endure many, many seasons of barbecuing. I highly recommend the Genesis barbecues from Weber.

The updated E-330 models are available from Amazon and Lowes starting at around $720:


Buy Now - via Propane via Amazon