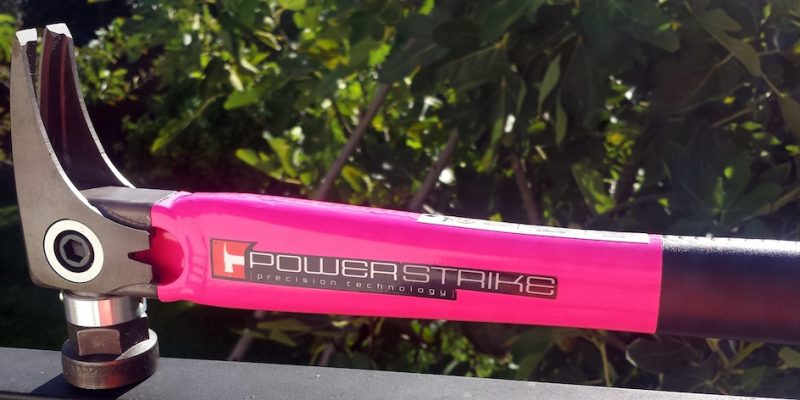 Ever had a hankering for a Neon Pink hammer? Me neither. Now make that fuchsia, on the other hand…nah, I’m not even sure what that color IS. But I’m guessing there are some women out there in the building trades, or even some DIY gals (or really secure guys), who might get a kick out of having a high-grade hammer in pink. If not, the Powerstrike Hammer comes in seven other attention-grabbing colors, including manly Gunmetal and farm-boss John Deere Green. And the color is just the first indication that this ain’t your granddaddy’s hammer.

Powerstrike Precision Technology, a new manufacturer located in Vista, California, recently sent us samples of their new Powerstrike Hammers to evaluate. We’ll also being doing a giveaway of a brand new Powerstrike hammer in May this year. I’ve been playing around with the neon yellow version; I’m not sure what became of the neon pink one, but if someone stole it, I don’t think they’ll get far before being spotted.

Some specs and features from Powerstrike:

A couple of things, besides the color, grab you when you first see the hammer. First off, for its size, it is very light; the Powerstrike hammer I got weighed just over 27 oz. with the spring head attached.

Next is its length—the Powerstrike hammer is a full 4” longer than the Craftsman 24-oz. hammer I compared it to, which weighed in at just under 32 oz. The longer handle likely enables the hammer to accomplish its task in part because of its extra leverage. I decided to compare the two hammers by doing what most people do with a hammer – smacking some nails!

My hammer of choice has always been my old Estwing 24-oz. solid steel handle framing hammer. Unfortunately, after over 40 years of banging nails, I apparently lost it on a job a few months back, so the Craftsman has been standing in. It works fine, and after setting a 16p. nail, I can consistently sink it with three blows (two if I’m feeling extra powerful). After sinking a few into some framing lumber, I switched over to the Powerstrike Hammer.

I had a bit of a learning curve with the Powerstrike hammer. I had never used a hammer with a magnetic nail starter before; turns out that when you set the nail, you need to use a fairly mild blow. I smacked it hard, and sent a couple of nails off into the ether before I figured that out. The magnet is very strong and holds the nail on the head with no problem. A minor quibble: you have to make sure the nail is coming straight off the head of the hammer. Other hammers with a nail starter have a groove in the top of the head as a guide, but apparently the removable head on the Powerstrike makes that tougher to incorporate into the design.

The other problem I had was judging where the hammer was going to hit; the extra 4” requires some recalibration of the swing. By my fourth or fifth nail, I was catching on (hey, I’m trainable!), and was able to regularly sink the sinkers with three and sometimes two blows.

According to the folks at Powerstrike, the dynamic reflex technology used in the spring-faced head acts as a leaf spring, storing and releasing energy. This is supposed to enable you to hit harder with less effort and fatigue. After using the two hammers side by side, there IS a noticeable difference in the shock that gets transmitted into your arm; the Powerstrike hammer is much easier on the forearm. For a framing carpenter pounding away all day, this should translate to a lot less wear and tear on the old (speaking for myself) tendons and muscles.

An additional feature I liked was the inclusion of a nail puller on each side of the head. These, combined with the claw, provide three good options for ripping out any mistakes – hey, just because WE don’t screw up doesn’t mean nobody does! The long handle helps, too, offering good leverage for cranking those pesky rusted fasteners out.

The Powerstrike Hammer – Color Your Own

So is the Powerstrike Hammer worth the price of admission? If you use your tools regularly, and appreciate a well-crafted tool, it’s definitely worth considering. The tool has a quality feel and look to it, and the ability to customize it, in terms of the swing weight – and the color – make it unique. And you’ll sure as hell know if someone steals it! The fact that it’s made in the U.S.A., in their manufacturing facility in Vista, California, may also help sway you; we like to support domestic manufacturers whenever they deserve it.

The Powerstrike Hammer is backed with a limited lifetime warranty, and is available directly from the manufacturer in your choice of color for $149. Replacement parts are available as well. And, don’t forget to visit HomeFixated in a few months or so when we do our Powerstrike hammer giveaway! 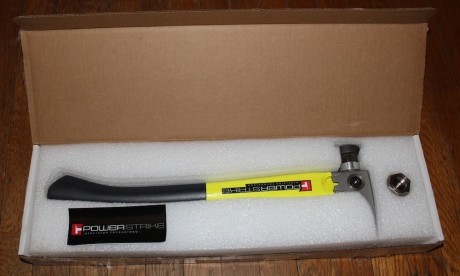