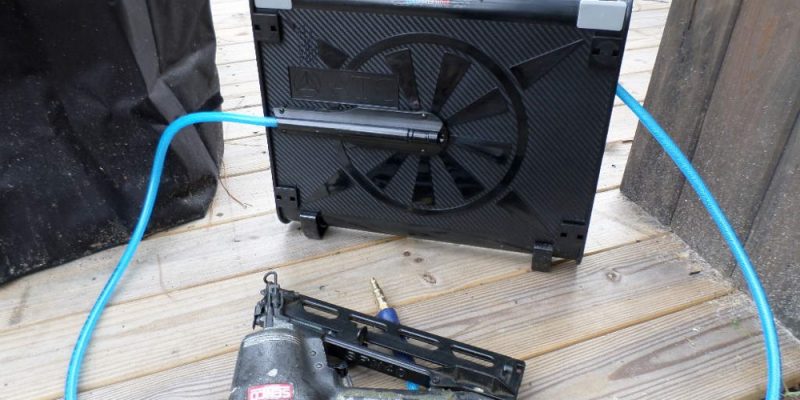 I don’t know what it is, but every time I roll up my pneumatic air hoses, they look perfectly fine when they go back into the work truck at the end of the day. Then somehow when I get up in the morning to take them back out again, it looks like the knot fairy came to visit. Even without the knot fairy, stowing and deploying air hoses can be a pain. But now I can say goodbye to that old hag once and for all with my pneuPower ReCoiler!

I used to work for a framer who took extra care with his hoses and kept those pesky knots at bay. He used a couple of garden hose reels that he modified to fit into the ceiling of the work van to help reel up the hoses and keep them nice and straight until the next job. They worked fairly well, but it was always a pain in the neck to reel up the hoses because it took two people to do – one to reel in the hose and the other person to help feed it onto the reel and keep it straight. It was a good concept, but ended up taking more time and effort to pull out and put everything away.

So, when I saw the pneuPower ReCoiler, I knew it was an idea whose time had come. They had taken the idea that my former boss had implemented with his air hoses, and tweaked it to make it more practical and useful. I really hate bunched up air hoses, so when offered us their product and the chance to do this review, I was more than ready to test it out.

Don’t Be a Hoser

There are two versions of the pneuPower ReCoiler – the 1/4-inch hose version with 100 feet of hose and the 3/8-inch hose version with 50 feet of hose. I received the 3/8-inch hose and was pleased as punch to test it out. However, once I got it out of the box, I found that it didn’t come with couplings! That’s typical of many air tools, so it didn’t really bother me too much, and the good folks over at Air Technology Concepts were gracious enough to accommodate me with male and female couplings.

The first thing I had to do was pull out the hose as far as it would go and then reel it back up. As I pulled the hose out, I found that the hard plastic briefcase-style case that covers the outside of the hose reel tends to be too lightweight to allow the hose to come out. I ended up just dragging around the case without any hose coming out. But because the pneuPower ReCoiler is designed to lay flat on its side on four little feet, I was able to place my Makita compressor on top of it to hold it down.

That worked out great because then I was able to easily pull out all of the hose while it’s plugged into the compressor. It comes with a five foot long lead hose that comes out of the top of the tool. It’s covered with hose restraint so you don’t have to worry about it accidentally ripping off or getting sucked back into the reel when you’re rolling up the hose.

The air hose itself was very nice and I found it to be pliable and easy to manipulate. It’s made from double walled polyurethane cold flex hose with embedded webbing that has an operating pressure of 250psi – way more pressure than my air compressor can even put out, so there’s no need to worry about it bursting during typical and even heavy use.

One of the problems that my boss ran into with his homemade hose reel was that when you rolled it up, it tended to bunch up and tangle as it was being rolled onto the reel. The pneuPower ReCoiler is equipped with a support reel that prevents any tangles from going onto the reel. I’ve rolled my 50 foot hose up without a problem every time. I was impressed with how flexible it is – no more tangled hoses while I’m using a pneumatic air tool. The hose is also designed not to kink or stiffen down to -60 degrees and up to 175 degrees, those are two temperature extremes I hope this hose will never see.

All in all, if you’re reeling up air hoses every day, it’s well worth the investment. At around $130 for the 50 or 100 foot long hose reels, it’s really not much more money than a good quality hose alone will run you. While the case is a little light for my liking, it is made from some really hard plastic that seems to take a good jobsite beating and still work fine at the end of the day. However, it does have a shiny finish that I’m positive will be scratched up in no time. But after all, doesn’t that give your tools character? At least no one will accuse me of not doing any work!