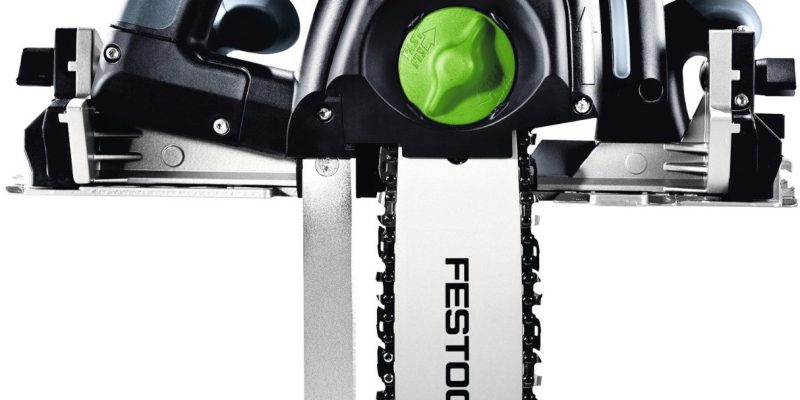 Cutting beams isn’t a task most of us do with any regularity (unless you happen to be a timber framer or log cabin builder). However, when you find yourself needing to cut a beam, you suddenly realize just how inadequate your existing assortment of saws likely are for the task. Cutting the big stuff with conventional saws is like showing up to a framing job with a hacksaw. Sure, you can take passes from multiple sides or put a giant blade on your reciprocating saw, but getting a straight cut can be tricky. With some beam thicknesses, even multiple passes isn’t going to do the trick. In this article, we’ll shed light on three specialized beam cutters. One, the Festool Sword Saw, which isn’t available in the US. Two, the Prazi Beam Cutter, a relatively inexpensive accessory that turns your circular saw into a beam cutting beast. And three, a massive 16″+ circular saw from Makita. 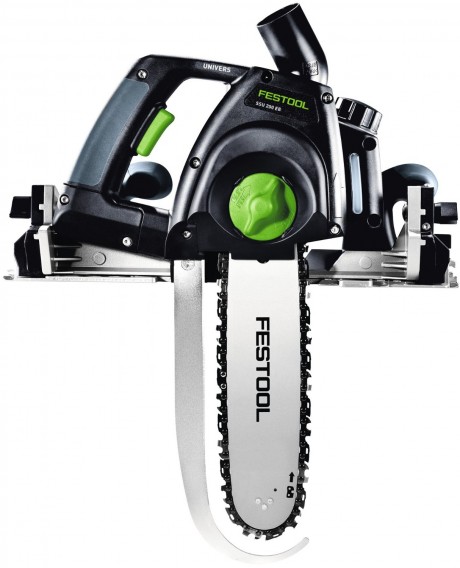 Before we dive into more detail on the Festool Sword Saw, let’s remind you it’s not sold in the US, and safety certification hurdles will likely keep it out of the US market for the foreseeable future. Even if you’re in the US and can’t get your hands on a Festool Sword Saw, it’s a tool that’s unique enough to still be worth reading about. You know how peanut butter and chocolate (or just about anything and chocolate) were discovered to go well together? Similar concept here, except instead of yummy food, Festool decided to make a jigsaw/chainsaw hybrid.

Sure, precision isn’t something most people associate with chainsaws, but if anyone can pull that off, it’s Festool. The Sword Saw can even be used with a Festool guide rail to make sure your cut, (straight, angled, and/or beveled), is right on track. Given that we’re essentially talking about a chainsaw blade here, we suspect blade deflection is a minimal to non-existant problem with this beam tool. Here are a few spec’s:

A totally new type of saw for Festool, cutting all standard materials used in timber construction up to 200mm, from wood to hard insulation materials. A great saw for timber framing, renovation, roofing and insulating. Lighter in weight and with a large depth of cut, it can go where a circular saw is unable to go. The special chainsaw blade gives an accurate precise cut especially when used with the Festool guide rail system. Optional chains are available. The chain makes a drawing cut for rapid jolt-free operation and is speed adjustable. Efficient electronics give constant power when sawing for a consistent cut. Perfect for deep mitre and compound angles, it has a swivelling range of 0-60° with cut depths of 200mm@90°, 140mm@45° and 100mm@60°. The sword approach can be tilted up to 10° allowing for an even faster drawing cut.

The Festool Sword Saw also sports a rotary dust extraction attachment to make your beam cutting operation a remarkably tidy affair. Although cutting rigid insulation is a common application for this saw, it chows down on wood too, as you can see in this Sword Saw video review:

Max Cutting Depth:
Up to 12 inches 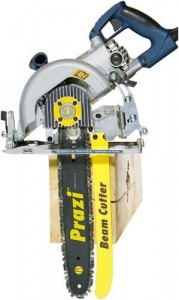 The Prazi Beam Cutter comes in two varieties, one designed for worm drive and the other for sidewinder circular saws (make sure you check compatibility with whatever saw you intend to use with it). It fits select worm drive models, but claims 99% compatibility with 7 1/4″ sidewinder circ saws. The reviews on the worm drive version were significantly more favorable (4 stars on Amazon, vs 3 stars for the sidewinder variety). Several reviewers cautioned against using the tool for rip cuts. Based on what we know of Festool and what we read in some of the Beam Cutter reviews, I think it’s safe to say that if precision is vital, the Sword Saw is likely a better bet for you. Even so, the price difference between the two products is substantial enough to make the Prazi a worthwhile experiment. Plus, if you’re in the US, you can actually buy the Prazi Beam Cutter without risking a grey market tool-smuggling offense with the Festool.

Get more details on the Prazi Beam Cutter via this helpful but charmingly dated video here: 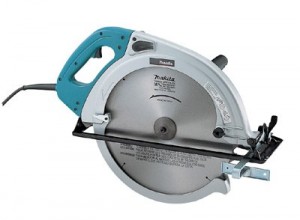 Like your own portable, handheld sawmill, the Makita 5402NA makes a conventional circular saw look like a doll-house prop. If you’re cutting notches in beams, the Makita is a natural choice thanks to it’s adjustable depth control. The 5402NA sports a 15.0 AMP motor which spins its epic blade at a beam-chomping 2,200 RPM. Makita describes the noise level as “low. . . at only 87 dB for quiet operation.” They also describe this beam cutting beast as weighing “only 32.1 lbs.” I’ll chalk both these spec’s up to marketing enthusiasm, as I’d guess very few of us would say a monstrous 87 dB circ saw weighing about 20 lbs more than most circ saws is either quiet or light weight.

Marketing enthusiasm aside, the Makita It currently enjoys an impressive five star rating on Amazon, with over 25 reviews. The reviews are downright glowing: “THE tool for cutting 4xs and 6″ Glu-lams”, “Great saw, cuts well with plenty of power. Electric brake stops on a dime”, “a powerhouse. It slices through 6x stock with ease”, and “only thing the saw needs are reigns and a saddle!” Despite its relatively specialized tool status, it’s clear the Makita 5402NA Beam Cutter has an enthusiastic following. This saw uses a whopping 16 5/16″ blade, and if you need to replace it, budget in about $70-$220 for the blade alone.

Did we miss your favorite beam cutter? If so, let us know what you like in the comments area below.

You can find the Festool Sword Saw on the UK version of Amazon, for just under 800 pounds, or about $1300.

If you’re in the US, or just don’t want to spend Festool-level money on cutting beams, you can find Prazi USA PR7000 Beam Cutter for 7-1/4-Inch Worm Drive Saws

is available for around $750 on Amazon.