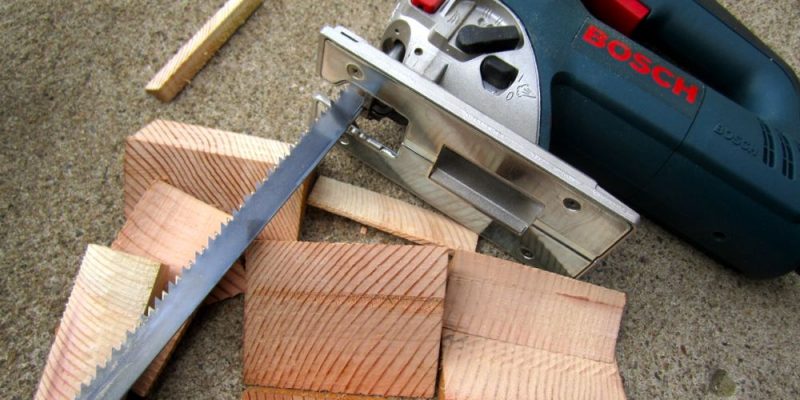 Just like certain “movie” stars, some tool accessories are known for their girth, and others for their length. Jigsaw blades aren’t typically known for either. If you’re looking to cut a meaty piece of wood and you don’t happen to have a bandsaw handy, your options have been pretty limited. Bosch recently released their Precision line of extra long 10 inch jigsaw blades and we found ourselves wondering whether they had much practical use, particularly for doing what you often do with jigsaws; cutting curves. With our curiosity piqued, we asked Bosch if they could send a few blades our way to review. We were pretty sure they could cut a thick piece of wood straight, so we set out to test these with curvaceous cuts that would have been a challenge even with a portable bandsaw.

Not long ago, we did a roofing repair project. Like most projects around our old home, what started looking manageable quickly spiraled into more work and, of course, more expense. As the roofer pulled up the old roof tile on one section of the roof, he discovered our friendly neighborhood termites had devoured all but the paint on our custom cut roof corbels. Luckily, our roofer knew better than to put his weight over the corbels. If he had it would have been a fast and likely painful ride down to ground level. 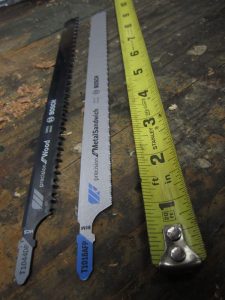 Thanks to the unspeakably evil termites, we needed to buy some nice sized timber and have the corbels custom cut at our local lumber yard. Thanks termites! A few weeks ago, I got the silly idea to mimik the look of our larger roof corbels with a slightly smaller variation for some decorative garage trim. Rather than pay our lumber yard or use a tool actually designed for this, I thought I’d take the Bosch extra long jigsaw blades for a spin. To be honest, I thought they’d fail pretty miserably, mainly due to blade deflection. The wood I was cutting measured a full 3 1/2″ thick, so I’d be cutting through more than twice the thickness of doubled-up 2x material.

Step one was to copy the corbel curve from an old piece the termites only ate half the insides of. I traced the profile to a scrap piece of cardboard, which I then carefully cut along the lines of the profile. From there, I held the cardboard template to the beam and traced the profile back to the wood. Using the cardboard allowed me to fine-tune the curves and was easier to work with on multiple pieces than the half-eaten sample corbel I had. Once I had the profile traced, I locked the timber into my trusty Jawhorse and prepared put the Bosch long jigsaw blades in action. One thing I immediately noticed with the blades (aside from their extreme length) is that they were surprisingly rigid thanks to an extra thick kerf. That’s a good thing when it comes to cutting thick material. If these blades were as flexible as a typical scroll blade, the blade on a thick cut would be more bendy than a Russian contortionist. Since I wasn’t going for a Dr. Seuss-Renaissance look on these corbels, I still had some hope these blades might actually make a somewhat vertical cut. The extra width on the blades (which contributes to their strength and rigidity) also means you’re not going to be cutting ultra-tight radius curves. I made up for that by starting my cuts from multiple locations on the outside of the piece and essentially carving some space for the blade to pivot. This took a little longer, but then this wasn’t your grandma’s typical thin plywood jigsaw cut.

Amazingly, several minutes and a fair bit of sawdust later, I appeared to have two decent looking corbels. Did the long blades deflect and wander a bit? Sure. But they did so far less than I expected. These Bosch extra long jigsaw blades aren’t accessories you’re likely to use every day, however they can come in very handy for particular projects where you need a little more fine control than your reciprocating saw delivers. In addition to the the wood blade we tested, there’s also a metal devouring blade that can munch right through a sandwich of light metal.

These extra long Bosch blades run about $21 per three pack and are available in both wood and wood/metal blade styles.