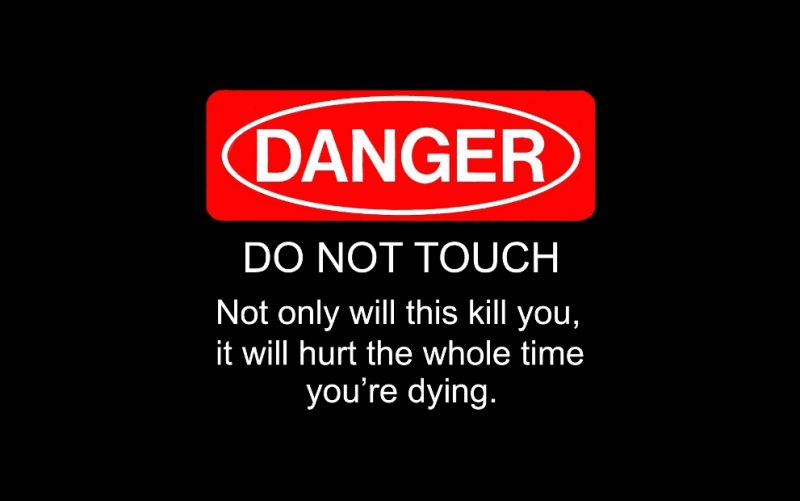 The woodworking universe is populated by a diverse group of people. It includes traditional project-builders like my father-in-law, who cobbled together many a fine masterpiece in his time, including barrister’s bookcases, cradles, end tables and lamp bases. Toward the other end of the spectrum is the realm of those who are far less traditional, either in the methods they employ, in their finished products, or both, and includes some practitioners of the craft whose techniques you definitely do NOT want to emulate.

There’s an amazing amount of stuff out there in cyberspace, ranging from mundane to weird to morbid (want to see someone die in an industrial accident? It’s out there). Our intent with this small sampling is to amuse, amaze, make you ponder a bit, and perhaps inspire you to create something worthy of a video of your own. But hey—tools CAN be dangerous; be careful out there!

Best Use of Old-Growth Rainforest

Ever had a big shindig coming up, and thought to yourself “Damn, I could really use a three-foot wooden snack bowl.” If so, here’s a guy can maybe help you out. He works incredibly fast; I’m thinking whatever he’s getting pumped in through his Storm Trooper helmet is more than just oxygen…Actually, the artist, Aaron Hammer (a fine name for a tool-wielding individual) said it took him three years to turn an 800-pound log into the finished product, hence the use of time-lapse photography. Otherwise, it would be a REALLY LONG video…Anyhow, now it’s ready; just add a gallon bucket of guacamole dip, and par-tay!

Woodworking in the Great White North – A 150 H.P. Lathe

Not everyone needs a three-foot party bowl (if you are among those who do, however, ring me up next time you plan to load it up). Up in the wilds of Canada, the population gets a bit sparse, and they can get by nicely with a much smaller bowl. Since there are no Rockler stores way up there, they are forced to get creative, often in a manner that would have an OSHA inspector reaching for a three-foot bowl of Excedrin.

As the son of a French Canadian from the wilds north of Montreal, I couldn’t help but feel a tinge of admiration for the creativity on display by the self-proclaimed Crazy Canadian, Paul Moore, in his quest for a home-made wooden bowl. It’s rare that a forklift, a crossover vehicle, and a snowplow blade can join forces in such a noble quest. As the man says, though, no matter how stupid you are, do NOT try this at home! And if you do, make sure your wife isn’t around. You might also want to be sure all your insurance is current.

Incredibly, this guy has survived long enough to make a whole series of videos. Just search for “Paul Moore Crazy Canadian” on YouTube, if you want to see more examples of how to cleanse the gene pool…

The winner in the “Do as I say, not as I do” category is this demonstration of table-saw kickback.  The gentleman who made it states that there are a lot of people who will say he is an idiot for making this video, and that these people would be right.

Most of us who use power tools on a regular basis are aware that they can be dangerous, but we can tend to get lax in our precautions, taking short cuts or using a tool in a manner not condoned in the 37 pages of !!!CAUTIONS!!! seemingly contained in every owner’s manual. Do you always wear your safety glasses when you should? How about that hearing protection? Ever reach just a liiiitle bit further off the ladder than you should, rather than get down and move it over two feet?  Any protective mechanisms missing from YOUR table saw? Yeah, me too. And most of the time we get away with it. Here’s a good example of WHY all those safety warnings are in those owner’s manuals; it’s a good, sobering one to watch for anyone who uses a table saw.

So THAT’S Why They Call Them Choppers!

A few months back, I did a review of a Husqvarna chainsaw. My chainsaw skills are adequate—I can take down a tree and turn it into a nice stack of cordwood for the woodstove. My artistic abilities, however, could charitably be described as somewhere in the range of nonexistent to pathetic.

Out in the wide world beyond firewood, however, is the realm of those who look at a big tree and see something a bit sportier; a bench, an eagle, a garden gnome—or a Harley-Davidson Sportster. There may be those who would quibble and say that sculpting with a chainsaw is not woodworking. I say whether you carve with a chisel or a chainsaw, skill and a good eye (neither of which I possess) are required, and if you make something beautiful or amazing out of a raw chunk of wood, you’re a woodworker in MY book. Aside from which, I generally think it’s a bad idea to piss off people who are adept with a chainsaw…(By the way, yes, I KNOW this isn’t a chopper. It’s called creative license, dammit.)

On A Smaller Scale…

If you’re looking for somebody with bandsaw skills, this guy’s got ‘em. What’s amazing is that he also still has all his fingers. This video doesn’t appear to have been sped up, and he works so quickly, and with his fingers so close to the blade, that you can’t help but cringe. Seems like a big chance to take, considering the final product, but nobody asked me…

If these videos have inspired you to dive into a safer and more conventional woodworking project, swing by our sponsor Rockler’s local store or hop on Rockler.com and get equipped. Just don’t be disappointed that they don’t sell vehicle axles for wood turning, and don’t forget your safety gear!