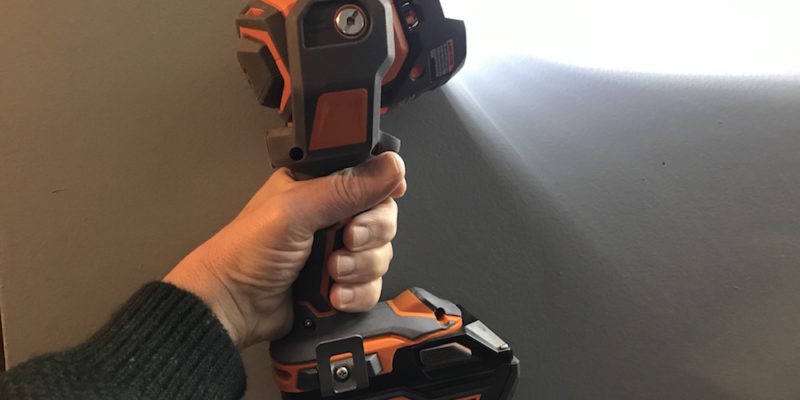 As battery and LED technology improves, Ridgid and the other major toolmakers continue to introduce brighter, more efficient job site lighting options. Recently, we took a look at Ridgid’s versatile folding LED panel light. It did a nice job of lighting up a fair-sized work area. Sometimes, though, you need more portability and a more focused beam – while wiggling through a tight crawl space, threading your way between roof trusses, or chasing your idiot dog when he bolts out the door at midnight, for example. Ridgid sent along their weapon of choice to solve these problems: The Ridgid Light Cannon.

Resembling a hand-held spotlight, the Ridgid Light Cannon has a rugged look and feel to it. The handle is cushioned with a soft rubber overmold, and the light is comfortable to hold, both for me (very large hands) and my wife (itty bitty hands). The overmold also wraps around the edges of the lens, offering good protection against the inevitable bumps and knockdowns.

The trigger operates smoothly, and serves simply as an on/off switch. Once the light is on, a dial on the back of the light lets you adjust the brightness to the exact level you need, from sort of bright to 2,500 LUMENS SCORCHING YOUR RETINAS BRIGHT. Dialing back the light lets you keep the glare down when you’re working in a tight space, like under a sink, and also helps conserve battery power. I think it’s a great alternative to the more common HI/LO/DISCO STROBE/OFF settings.

Ridgid claims the light will run up to 30 hours on low power. I tried it out, and got 32 hours and 15 minutes out of a 5.0 Ah battery! I also tested it on full power, and it ran for a very respectable 4 hours and 22 minutes. Here’s a quick look at the specs from Ridgid, followed by a short clip to further enlighten you on the Ridgid Light Cannon and its siblings in the Ridgid LED light family:

Like the panel light, the Ridgid Light Cannon will run off any Ridgid 18V Li-Ion battery. If you’re going mobile, though, there’s another option. The full name of this light is the Ridgid GEN5X 18V Dual-Power Light Cannon. Being inherently efficient, I’ve shortened it to the Ridgid Light Cannon, which speeds things up and provides fewer opportunities for typos. Anyhow, the “Dual-Power” is the key here.

If no battery is available, or you want to conserve it, the light will also operate using the included 12’ car adapter that plugs into your vehicle’s cigarette lighter. Just slide off the Ridgid battery, and insert the plug into the connector. A retaining slot on the back of the light helps keep it tamed.

Having the ability to power the light with your car’s battery is a nice option. Car trouble on a lonely road? The light will easily reach under the hood, or around to your flat tire. Got to your campground a bit late? The Ridgid Light Cannon will light up the site, so you can get set up and get that campfire going. Battery dead after a long day’s work, and you’re trying to load your tools up in the dark? Plug it in and fire it up. The head, which can swivel a bit over 180 degrees, makes it easy to let your light shine just where you want it.

The Ridgid Light Cannon is very stable with its battery sitting on any flat surface. When the adapter cord is connected, the light will still stay upright, but it’s not quite as stable. The included reversible belt clip also acts as a hanging point, if you have a wire, cable, nail, piece of twine or whatever to suspend it from.

Another very handy option Ridgid is building into all its LED work lights is a threaded tripod mount. The standard ¼ – 20 thread allows you to mount the Ridgid Light Cannon, or any Ridgid work light, on any standard tripod. If you routinely use job site lighting, and want a stable way to get your lights up off the floor, you should check out the Ridgid GEN5X Universal Collapsible Tripod Stand.

Unlike your typical photography tripod, the Ridgid Tripod was designed to withstand job site abuse. Equipped with four ¼ – 20 mounting points, the tripod can hold any three Ridgid lights at a time. It can also hold anything else with a standard thread; finally I’ve got something solid to mount my rotary laser on! It will also help me get better pictures in the field. The tripod extends up to 7’ high, and collapses for easy storage and transport.

Enough yammering – let’s light it up! I took the Ridgid Light Cannon up into our dark, scary attic at dusk. I hate the attic; it has a very low ceiling, with bracing all over the place. Definitely not a human-friendly environment. Usually when I go up, I take a flashlight, which I then have to try to prop up somewhere, hoping it doesn’t roll off and disappear in a cloud of dust. The Light Cannon put out an amazing amount of light, illuminating a good chunk of the space. The ability to stand it upright on the walkway boards, and then swivel the head to focus on the work area, means the light goes where I want it – and stays there.

After emerging from the attic, I needed some air, so I took the accessory cord and headed for my truck. I slid the battery out, connected the cord, and plugged it into the truck’s power outlet (I guess it isn’t PC to have cigarette lighters anymore). The light worked great off the truck’s 12V battery power, and seemed as bright as with the Ridgid 18V battery. Magic! The cord reached easily to my back wheel areas, even though I have a Supercrew cab. I also popped the hood, and the cord was plenty long enough to use anywhere around the front of the truck.

For a final bit of fun and neighborly annoyance, I took the Ridgid Light Cannon onto our back porch, and aimed it toward the back of our yard. Our property goes back a bit over 200’, then there’s an alley, and the backyards of homes on the next street over. It lit up our yard, the neighbor’s cars, garage, and houses beyond. The brightest beam is right down the middle, but it lights up the periphery nicely, too. The view is much nicer in summer, when all we see are trees…

Is The Ridgid Light Cannon Right For Your Arsenal?

Although designed and built for pros in the trades, the Ridgid Light Cannon is likely to have a far wider appeal. Potential users? Anyone who needs a rugged, powerful light. Campers, fishermen, DIYers, home inspectors, boaters, or homeowners who have to check on things that go bump in the night. The excellent run time and light output make it a great choice for anyone who has to work in an attic, crawl space, or other claustrophobic area.

Any quibbles? Nothing major. It would be nice to be able to focus the beam. I’m guessing that would make for a much more complex lens, though, and they’d rather keep the price point down. The only other minor annoyance is that when you turn the light off, then turn it on again, it comes on at full power, regardless of the setting you were previously using. It would be nice to have it resume where you left off, but since it takes all of two seconds to reset it, not a deal breaker.

The Ridgid Light Cannon is sold as a bare tool, meaning if you don’t already have an 18V battery and charger, you’d have to add them to your shopping list. For anyone who already has a Ridgid tool or two, or plans to start investing, this light would be very handy to have around. It’s rugged, versatile, and covered by Ridgid’s 90-day return policy and lifetime guarantee. If you’ve got places where the sun doesn’t shine, light ‘em up with a blast from the Ridgid Light Cannon.

Buy the Ridgid Light Cannon for a mere $79:

Buy the Ridgid Tripod for $79: