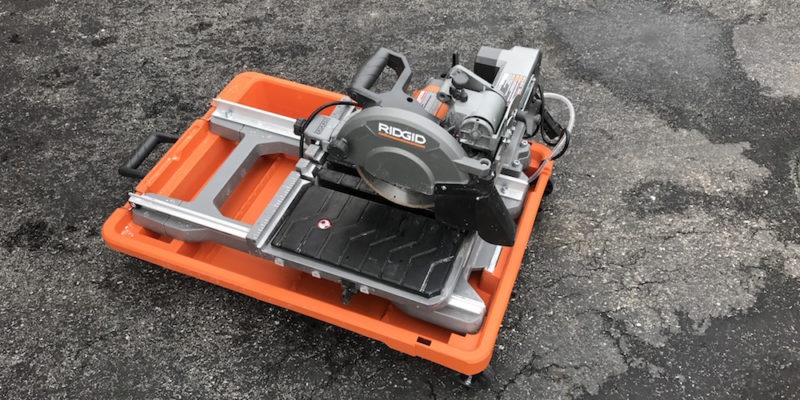 First, let’s get the disclaimer out of the way: I am not a pro tile installer, although I have many attributes in common with them. Crappy knees, a sore back, and an extensive vocabulary of colorful language, for instance. Despite that, I have installed a fair bit of tile over the years, bringing about glorious transformations to several bathrooms and kitchens. On many of these projects, I used a cheapo basic tile saw, aka the Community Tile Saw, borrowed from my buddy Steve. Recently, though, he moved, and selfishly insisted on taking “our” saw along. Since I had a bathroom floor to install, I was very happy when a large orange and white box, containing a Ridgid R4040S Tile Saw, showed up at my door for a review on HomeFixated.

The Ridgid R4040S is a major step up from the little tabletop saw I’m used to using. The motor is quite a bit larger, and much more powerful. Instead of pushing the tile across a gritty, aluminum table, a rubber-covered tray glides smoothly through the cut.

One of the biggest differences is that I get to stay dry; the little saw tended to throw spray in the general direction of the operator, while the Ridgid sends it down and back. This is thanks to its sporty guard baffle system and wrap around rubber splash guard, along with a water tray extension at the rear of the unit. Here’s a list of features, followed by a short promo video from Ridgid:

Getting Ready To Slice And Dice…

Getting the Ridgid R4040S Tile Saw set up was fast and easy. You’ll just need to bolt on the motor assembly, stick the pump in the reservoir, and install the blade. Doing so is simple. Turn the knob on the blade cover, and it swings open. The arbor wrench and Allen wrench work well, and the blade goes on easily. Just make sure when you put it on that it goes in between the two nozzles, so both sides of the blade get spray. Once the tray assembly is ready, it clamps to the top of the water tray, and you’re ready to cut some tile.

The setup feels very solid when assembled. The table glides smoothly, thanks to dual-bearing rollers. A knob by the motor makes it easy to lock it in the down position, or to unlock for use in plunge cuts. The motor can also be quickly tilted and locked into position to make beveled cuts at 22.5 or 45 degrees.

Using a small lever on the side of the table, it can be locked into position beneath the motor. This would be useful for making repeated cutoffs, or for plunge cuts. The same lever also allows the Ridgid R4040S tile saw to be a free-range beast, or as free-range as you can be going backward and forward.

One of my favorite features on the Ridgid R4040S tile saw is the laser guide. It makes a visible line the entire length of the tub, so even if you start with the table pulled all the way back, you can get the blade lined up with your mark. The laser is activated by a button on the end of the motor’s handle, and remains on until you command it otherwise. It was dead on, and really sped up the cutting process. If it does eventually get knocked out of whack, from being dragged from job to job, the manual provides adjustment instructions.

Take A Stand And Pull The Trigger

Another feature my creaky knees and I really appreciated is the included saw stand. The stand is sturdy, and simple to set up: Slide the feet out to the desired height, insert the pins, and flip the locking clips around. Two crossbars fit into grooves in the tub and saw assembly, and the setup is very stable.

The power switch on the Ridgid R4040S tile saw can be locked in the off position. I think this is a great safety feature for a tool that might be left at a customer’s home for several days during a remodel.

The tray has wheels at one end, so when your slicing and dicing is complete, you can tug it along behind you, rather than trying to carry it to your vehicle. It stands solidly upright, making it easy to store.

For its break-in project, I put the Ridgid R4040S tile saw to work on a bathroom floor tile job. We were using a mix of 4 X 12” and 8 X 12” ceramic tiles, and the bathroom had a Jacuzzi-style tub with a 45° angle, to keep boredom at bay.

I set the saw up in the garage, and filled it with a garden hose. Protruding MIN/MAX fill indicators make it easy to get the water to the right level, and a foam filter keeps much of the sludge out of the pump reservoir.

The first few cuts I made were simple cross cuts. We were staggering the joints, so I needed to cut several of the 4” wide tiles in half. After determining the mid point of the tiles, I clamped the miter guide in place. It locks down firmly, and made it fast and easy to get precise, repetitive cuts.

For other cuts of various lengths, the laser line was a huge help. I had the saw set up in the garage, and the light was easy to see. When the saw was in direct sunlight, it was tough to see the line, a problem common to pretty much every laser light.

To power up the Ridgid R4040S tile saw, just pull the large red switch toward you; push it back in to shut it down. It takes a few seconds to get the water flowing off the blade; I used this time to ponder the mysteries of the universe. And occasionally to think about how good the first beer would taste at the end of the day.

The tray glided very smoothly along the rails and under the blade. The rubber on the table did a great job of keeping the tile from slipping around. The 8” blade sliced through the tile quickly and smoothly, with no bogging down at all, unlike the little saw I was used to using. Every cut I made came out perfectly smooth, with no chipping at all.

Next up were the angle cuts. The miter guide can be placed on either side of the cut line. This made it easy to find a comfortable position to hold the tiles in place while making the 45° cuts. The angle was dialed in at a perfect 45°, and again there was no chipping, even at the pointed ends of the angle cuts.

The Ridgid R4040S tile saw also did a nice job on our notch and L cuts. Marking the top and bottom of the tile helped me avoid overuse of my special tiling vocabulary. I cut the top first, then flipped the tile over; the bottom cut requires overcutting the mark, which takes a little practice to avoid crossing the line.

Here’s a step-by-step video from Ridgid, showing exactly how to set up and use their four top-end saws, including the R4040S; it includes a couple of tips that might be helpful for ANYONE trying not to exceed their daily quota of foul language.

After all the cuts were made, draining the reservoir was easy – just unscrew the cap at the rear of the tank. Just make sure you have a bucket ready to catch the sludge water. A series of baffles in the bottom of the tray, combined with the foam filter, helps keep sediment out of the pump area.

Ready For A Saw That’s A Cut Above?

I was impressed with the Ridgid R4040S tile saw. It feels well made, solid and durable. It’s easy to set up and use, accurate, and gave perfectly smooth cuts with absolutely no chipping. The ability to cut 24” tile, make accurate bevel and miter cuts, and make plunge cuts makes this a saw that should appeal to a lot of users. Throw in the ability to cut 4” thick pavers, and it gets even easier to rationalize making the investment.

The only negative I can come up with is that when you’re cutting 24” long tile, there’s a fair bit of it hanging off the table unsupported. Some sort of extension table would be helpful for tile setters who regularly install this type of large tile. Even so, when I tried it out, I had no issue with cutting tile this large.

If you’re a remodeler who does a lot of tile jobs, a serial renovator, or just a DIYer who likes having quality tools to get the job done, I think you’d be very happy with the Ridgid R4040S tile saw. I’m almost looking forward to my upcoming kitchen backsplash tile job – and now I control the NEW Community Tile Saw! Ridgid backs the saw with a 90-day money-back guarantee, a three-year warranty, and its Lifetime Service Agreement.