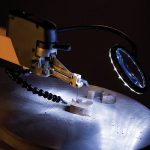 It has been kind of a woodworking theme for me this month.  Not that I claim any type of real skill in that area—but hey—if I can fool someone into paying me to do dangerous stuff in their newly built woodshop—that’s their problem.  The bonus lies in I get to hack out some stuff that I can call “handcrafted”. That all being said:  I’ve been spending a bit more time cruising around our sponsor Rockler Woodworking for stuff that I ought to have.  I mean—fine woodworking tools is a gigantic un-tapped resource for me.

(A total aside here…I recently watched the Australian Rules Football Grand Final with some friends. Why am I watching Aussie rules?  Long story—some other time.  During the extremely exciting sports action: my friend Kate piped up and declared that apparently…the uniforms, and the men in them were an “un-tapped resource” for Kate’s viewing pleasure. Sigh).

Back to untapped resources of the non-Kate kind:  Tools.  Seriously…check Rockler out.  Have you ever seen so many things that you absolutely need?  I know I do.

Barring all kinds of expensive arsed power tools that could only be mounted in a gigantic, awe-inspiring wood shop—those go without saying—but one of the things I’ve noticed that I really could use is the Rockler LED Work light.

It has 5x magnification, and 18 LED lights to light up whatever it is you’re working on.  It is no secret to woodworkers that proper lighting is pretty much a no-brainer, and being able to see it up close and personal would be a boon to anyone that has ever used a scroll saw, a spindle sander, or simply has a hard time seeing a fine line to be cut.

The Rockler LED Work light features a magnetic base, a clamping base and a flexible arm for moving it into the perfect position.  Maybe the poker players should have had this when Marc reviewed the Milwaukee M-Spector.

That was a horrible idea.  Forget I ever wrote that.

More than just a woodworker’s light—the LED Work light would be good for an easel, crafts, or working with miniatures.  If you got two—you could also make a sweet pair of Flashlight type magnification goggles.

In the interests of disclosure, Rockler provided us with a couple of these in times past (for a prior giveaway on the site). The Rockler LED Work Light is available from our sponsor for about $60.