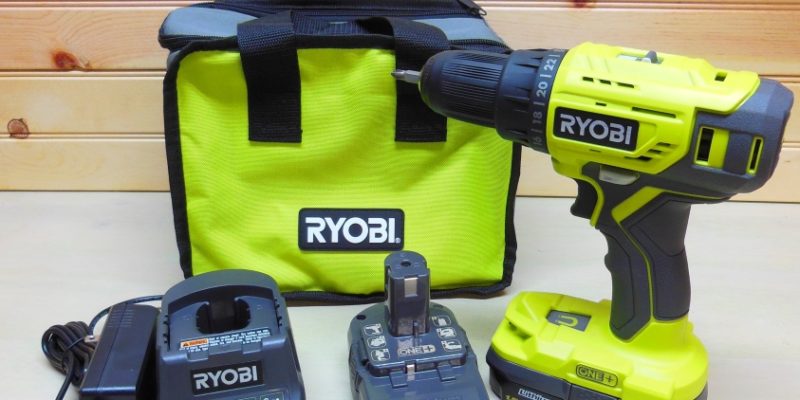 This post is sponsored by The Home Depot. If you think you have to pay top dollar to get a great power tool, you might want to cut back on the marketing sauce. We received a Ryobi P215K1 18V ONE+ 2-Speed 1/2” drill/driver kit to put to the test. Personally, I’ve had an assortment of Ryobi tools for a long time now and none have failed me yet. Are you ready to pull the trigger on a new drill/driver? Come check it out!

The feel and quality of Ryobi’s P215K1 drill/driver is better than the price tag might suggest. And that beauty is more than shell deep. To sweeten the deal, it comes with a charger and 2 batteries. The included batteries appear to be the smallest 18V ONE+ packs Ryobi offers. But you’ll appreciate having that second one while the other is charging.

I don’t have any big projects going at the moment, but there’s always a list of smaller things to take care of. We begin by siccing the Ryobi P215 drill/driver on a creaky, butt-numbing desk chair that needs disposing of. But not before plundering its last bastion of dignity (the screws and casters)! Some of the machine screws were too tight for a manual screwdriver (in my hands, at least). But the Ryobi didn’t bat an eye.

Next, I finished installing tongue & groove beadboard above a workbench. This is not how you’d normally attach beadboard to a wall. (When wainscoting, for example, you’d run the boards vertically and secure it with construction adhesive and brad nails.)

In the workshop, however, functionality often trumps aesthetics. If I ever hang cabinetry here I’ll use screws that can reach the underlying OSB. I just want the boards to be easily removable and able to support some weight, if needed.

For fun, I did a test I usually reserve for impact drivers: plowing a 3-1/2” deck screw into pressure treated lumber. The Ryobi P215 is not an impact driver, but I was curious to see how it would perform.

The screw is not self-drilling and no pilot hole was used. So it takes a lot more power to sink it flush with the surface; some impact drivers can’t even do it. And since the torque required to drive it increases the deeper you go, it’s a decent (admittedly, subjective) way to judge the tool’s brute strength.

Eventually, I just couldn’t push hard enough to prevent cam out. Given the same conditions, no other non-impact driver would fare any better. The Ryobi P215 didn’t bog down, so I’m sure it has the muscle to go at least a little deeper. In real life, however, it doesn’t take this much torque to use these screws properly; they just need a pilot hole. Then it would drive much easier (and suffer far less fatigue in the process).

The Ryobi P215K1 will obviously have no trouble drilling small holes (depending on size, maybe hundreds on a single charge). So let’s try something bigger.

Knowing I was pressing my luck, I tried out some Bosch Daredevil bits. These are super aggressive, self-feeding paddle bits that require decidedly more torque than your average spades. The drill is pretty comfortable running a 1/2” Daredevil. With the 3/4”, however… Well, it didn’t quite have the “oom pappa mow mow” to giddy up.

Personally, I already own a handful of Ryobi 18V ONE+ batteries, so I’d be happy with a single, larger battery (3–4Ah would be generous) over the two small ones. Or maybe bump these up to 2Ah for a little more run time. That said, if this is your first foray into Ryobi’s 18V platform, you’ll definitely appreciate that second battery pack.

Don’t get me wrong, you can do a fair amount of work on a 1.5Ah battery. But if you do a lot of bigger jobs, you will eventually want to get a bigger battery. Thankfully, all Ryobi 18V tools are fully compatible with all Ryobi 18V battery packs, so you may already have one laying around. Even if it’s from the old blue lineup.

One minor compatibility exception is that you can’t charge your Li-Ion packs with the old Ni-Cad chargers. But since the kit comes with a charger, it’s a moot point.

Drill ‘Til We Can Drill No More – Draining The Battery

I’ve been using one of the included battery packs and wondered how much more work could be squeezed out of a single charge. So I Swiss cheesed a pressure treated 4×4 until the well ran dry. Larger ONE+ battery packs have on-board charge indicators. These smaller ones don’t.

I chucked a 1/2” twist bit and proceeded to bore a bunch of holes almost all the way through a 4×4 (it did poke through a few times). I was pretty aggressive with every hole – drilling about halfway, pulling out to clear the chips, then continuing on to the full depth.

The juice finally tapped out most of the way through the 40th 1/2” hole. For a small battery pack – and working the tool harder than I normally would – it actually got a good amount of work done.

I’m very happy with the P215’s performance. It faced challenges with valor, even those best suited to an impact driver. However, there is one thing I dislike about it: the LED light comes on only while the motor is running, and there is no other way to activate it. If you actually need the light, it may not be very useful because the instant it turns on, so does the motor.

I’m used to squeezing a trigger a little bit and the light comes on so I can see what I’m doing. Then squeeze harder to start the motor. But on the P215, the two share the exact same on/off trigger points. Why? Also, the driver has two places where you can attach a belt clip. It even comes with a separate instruction sheet on how to install the clip. But you’ll have to buy the belt clip separately; it doesn’t come with the kit.

The small batteries that come with the kit do need more frequent charging. But it doesn’t affect the tool’s performance. A Ryobi 18V ONE+ battery that’s almost depleted delivers virtually the same power as one that’s fully charged. You just have less run time left before it needs a refill.

So there you have it. If you’re looking for a well performing 18V drill/driver that won’t break the bank, the Ryobi P215K1 is a great way to get you going. Lighting issue aside, the P215 drill/driver stands tall on its own merits. And it’s backed by Ryobi’s 3-year limited warranty.