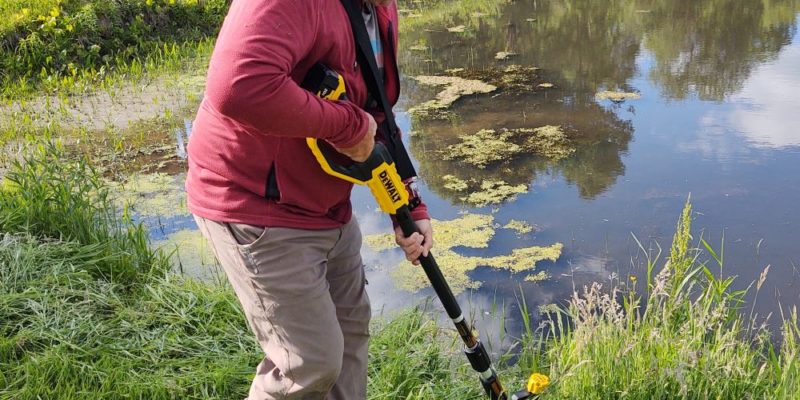 You’ve undoubtedly heard the expression “It’s a jungle out there” at some point. That expression has taken on new relevance for me as my wife and I attempt to overcome years of neglect on a piece of property purchased almost two years ago. We have tackled some of the worst deficiencies in that span in the house and buildings and are now looking to improve the overall property. We have fenced some pasture and have been clearing some of the more noxious invasive weeds and brush. This is where the new 20v Max DeWalt Pole Hedge Trimmer has been cutting a swath through the neglect. The 20v Max DeWalt Pole Hedge Trimmer is part of DeWalt’s line of 20v Max outdoor power equipment (OPE). Other tools in this line that I own and use are the DeWalt folding string trimmer and the Flexvolt blower. The pole hedge trimmer is the latest that DeWalt sent us to torture test and review. Join us as the we attempt to tame the farm with the DeWalt Pole Hedge Trimmer.

The Long and Short of It

The DeWalt Pole Hedge Trimmer is designed to cut through a variety of landscape overgrowth. We are overrun with Multi Flora Rose on our property, which is pretty to look at for about 5 minutes out of the year, the rest of the time it’s downright dangerous. It has rapier-sharp thorns that almost seem capable of leaping vast distances to entangle clothing, hair and skin. It’s tough stuff, but the pole hedge trimmer has a high output motor and 22 in. hardened steel laser-cut blades engineered for clean, fast cuts on branches up to 1 in. thick. It was more than up to the task. The 7-position, 180 degree, articulating head allows you to customize cutting angles for hedges of any shape and size. When fully extended, the DeWalt pole hedge trimmer can be extended up to a 12 ft. max reach, allowing you to stay a relatively safe distance when tackling this most vile plant.

Forging a Path With the DeWalt Pole Hedge Trimmer

The 20vMax DeWalt Pole Hedge Trimmer arrived at this branch of Home-Fixated during our extended upstate New York winter, so there really wasn’t much in the way of hedge to be trimmed. We were, however, in the process of cutting firewood. The property had been logged a couple of years prior to our acquiring it, and there was abundant firewood on the ground in the form of tops already toppled. The biggest challenge was getting to it. Much of the wood was behind screens of the aforementioned multi-flora rose, which may lose its leaves in the winter, but not its thorns.

We took the trimmer to a spot in the hedge on the edge of the woods and set the trimmer at a 90 degree angle and started cutting. Though it’s a little awkward to extend horizontally for any long spells, it was incredibly effective at slicing through the tangle of undergrowth. I would cut away the smaller diameter brush first then flip the trimmer around and take the remaining brush off at ground level. Here, the strap that is included proved to be helpful in supporting the unit by providing some counterbalance. In a relatively short time we had cleared a passage into the woods and got cutting.

Spring Arrives in the Jungle

Once the snow finally retreated somewhere about mid-May we were able to resume some of the regular maintenance on the property that had been neglected for some time before we purchased it. The log home has a nice porch that wraps around three sides of the structure. There was lattice under a small portion of the porch, which dressed it out nicely. The previous fall we had finally cleaned out all the junk and firewood from under the back porch and put the lattice up on that portion. That left the front porch to do. The problem there was the foundation plantings of Yew and Arborvitae had grown out of control and were extending significant growth under the porch.

Some of the branches were at least an inch thick, not to mention the heavy growth throughout. I set the 20vMax DeWalt Pole Hedge Trimmer with the cutting head straight out and got up on the porch. Once again, taking a layered approach to the job, I was able to trim the growth back to where we could fit the lattice panels behind the bushes. The cutter sliced easily through the outer growth that one would typically encounter when doing normal annual maintenance. It took a bit of doing to cut through the bigger branches, but anything that would fit in the space between the cutting teeth eventually fell.

Other than the foundation plantings in front of the cabin, we really don’t have any formal hedges on the property. Where I have found this trimmer to be the most useful is in beating back the brush that is constantly trying to shrink the borders of our useable land. We have cleared a mountain of brush from the banks around the pond, from laneways and from the banks above the main drainage through the property.

I never felt I abused this tool, but feel I definitely took it close, yet the blades are as sharp as when it arrived and the trimmer seems no worse for the wear. I can see where the articulating head would be the tool’s best feature in use trimming tall border hedges. There is a little bit of play in the position of the head of the trimmer, but it certainly doesn’t detract from the overall utility of having multiple angles to work with. The support strap is also a nice feature, especially for the type of work I used it for, running the head parallel to the ground to clear brush.

No Crying in Landscaping – Trimming a Weeping Willow

There aren’t that many trees near the main house, but there is a weeping willow out on the side lawn. These trees, in addition to dropping copious debris, also tend to send their tendrils down toward the ground. After having the branches almost scrape me off the mower a few times, I thought perhaps it would be better not to have them so close to the ground. I broke out the DeWalt pole hedge trimmer, and in a few swipes the problem was solved. By setting the cutting head at 90 degrees it was a simple matter to trim the offending growth. It took longer to clean up the trim then it did to do the trimming. I suspect I will only need to do this once a year.

DeWalt has come up with a winner with the 20v Max pole hedge trimmer. I have been moving away from gasoline powered tools whenever practical, and this tool is the equal in terms of power and versatility to any gasoline powered trimmer I have seen. It has the added bonus of relatively quiet and oder-free operation. I have a number of DeWalt cordless tools in the collection, as I try more of their outdoor power equipment line, I continue to be impressed with the utility and quality. The 20v Max DeWalt Pole Hedge Trimmer is available where DeWalt tools are sold for about $149.00 (tool only).