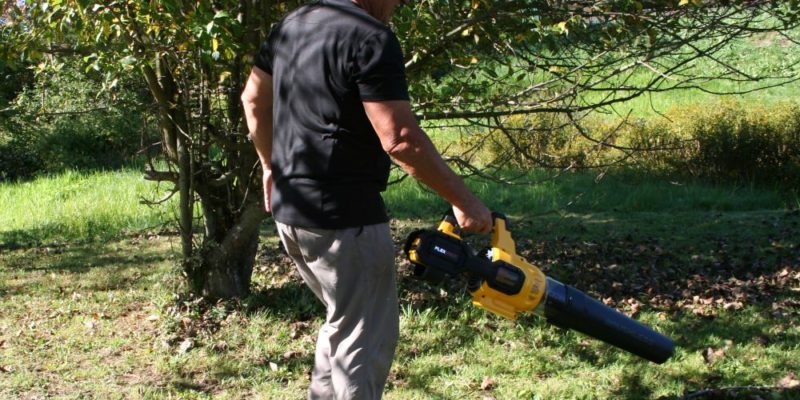 As the season turns to fall, so my thoughts turn to leaves, falling leaves. Leaves everywhere you look. Don’t misunderstand though; fall is easily my favorite time of year. What with the moderate temperatures, the bright colors and wall to wall football, there are no complaints here. The one distraction I can live without is the smell and sound of 2 stroke leaf blowers echoing throughout the neighborhood. I was therefore delighted when the DeWalt Flexvolt Handheld Axial Blower blew into town for us to test. First though, a bit about Flexvolt for the uninitiated.

DeWalt FLEXVOLT™ System is a platform supporting a wide variety of tools in a array of voltages, all of which are interchangeable. What does the FLEXVOLT™ System mean for you? It means cutting the cord once and for all. Heavy-duty corded power tool applications can now be performed with cordless tools, without sacrificing performance. The FLEXVOLT™ System offers power equivalent to corded tools, more runtime than previous cordless tools, and supports the existing 20V MAX* System as well as new 60V MAX* and 120V MAX* tools.

And check out this really interesting video from DeWalt (unless you are afraid of heights):

It’s pretty unlikely that I’ll ever be in a situation portrayed in the video above, but it gives you the idea just how tough and powerful this system is. My backyard is a bit tamer than the wilds of Whistler BC, but I decided to give the DeWalt Flexvolt Blower a spin and see what it could do.

I had been using a handheld 2 cycle gasoline powered unit for a few years, and though it was effective, I was never all that thrilled to have to break it out. I had decided a number of years ago to stop mixing my own 2 cycle fuel and to buy the expensive but stable premixes now available. That seemed to alleviate most of the problems associated with the poor quality gasoline that seems to be ubiquitous these days. However, this premixed fuel is quite costly and still requires careful refueling.

The 60V MAX* DeWalt FLEXVOLT Brushless Handheld Axial Blower on the other hand powers through your task with up to 600 CFM of air volume and 125 MPH. It features a variable speed trigger and speed lock to control the blower output. The power of this unit easily matches the output of my gasoline powered unit. It also powers up immediately, no choking it or warming it up before you tackle the task at hand.

The DeWalt Flexvolt Blower In the Yard

It was early in the fall when the DeWalt Flexvolt Axial Blower arrived, but the Poplar tree in the backyard by the pasture had been losing leaves at a pretty steady rate. I went out back to see how the blower would perform and was impressed that it was at least equal to the gasoline powered blower. It formed a nice line and the leaves looked almost like roller waves at the beach as they were moved as directed.

We have quite a large shop/garage area that is always dirtier than I like thanks to the tractor and other equipment always rolling in and out. Sweeping is tedious and raises clouds of dust, and vacuuming a space so large is out of the question. I took the blower in and directed from the back towards the larger of the overhead doors and started blowing. It did raise some dust, but the force of air from the blower took most of it outside, along with all the dried mud and other debris that had come to rest on the floor throughout the summer.

A Blower On the Mower?

The property also has large areas of grass; some of it maintained as lawn, some set up as pasture or hayfields and some in cultivation. I use a large commercial mower to maintain the lawn as well as some of the areas around the gardens and a couple of smaller paddocks for the sheep. After mowing there is grass stuck in every crack and crevice of the machine.

In the interests of keeping the mower clean and operating efficiently I would always try to clear the clippings from the mower deck and engine area using compressed air and an air nozzle. That was a less than efficient operation. I thought, why not the DeWalt Flexvolt Handheld Axial Blower? I removed the guards and let loose and within seconds the mower was cleared of all debris, quite a change from my previous efforts.

Taking the DeWalt Flexvolt Blower for a Stroll In the Woods

When not consumed by work on the home front, one of our favorite activities is mountain biking. Fall is an ideal time for this activity, temperatures have moderated, it is generally dry and the woods can be spectacular to see. One problem though is that as the leaves begin to fall in earnest, the trail can be difficult to follow. Sometimes this hidden terrain results in amusing situations, but more frequently in disaster.

My wife and I both volunteer with a couple of trail organizations, and this time of year the primary efforts are directed at clearing leaves and debris from the trails. Up until now we had used our handheld gasoline powered unit, so we were anxious to test the DeWalt Flexvolt blower on this task. Aside from being at least equal to the gasoline powered unit, the DeWalt Flexvolt blower had two distinct advantages.

Second, the trail systems we use are multiple use trails, so there are hikers and equestrians on the paths. The lower level of noise and lack of exhaust fumes are welcomed by all.

The primary beneficiary of advances in battery technology has been users of tools. I for one am a believer, the DeWalt Flexvolt Handheld Axial blower has replaced my gasoline powered unit, essentially making it obsolete. The power and convenience make it a clear winner. As a bonus, the smart design features set it even further apart. A great example of the design improvement is protecting the air intake on this blower with the handle. On my gasoline powered unit it was out in the wind, so to speak, leaving it exposed to all the leaves and debris it was pushing up. I had to routinely stop and clear it on the old gas-powered unit. I never had to clear debris from the intake with the DeWalt. The DeWalt Flexvolt Handheld Axial blower is available complete with 3amp battery and charger at the Home Depot and other retailers for about $249: