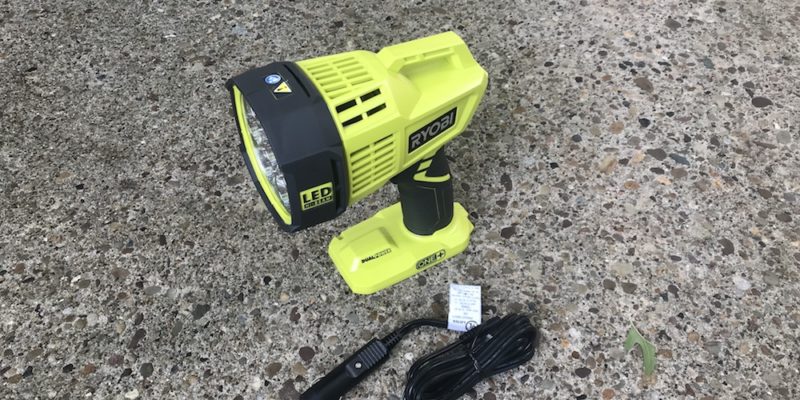 This post is sponsored by The Home Depot. When it comes to task lighting, I’m a huge fan of going free-range. LED lighting has improved steadily over the past few years, and Ryobi has been in the thick of it, with a nice variety of 18V LED lights for every occasion. We recently checked out their hybrid LED color range work light, and were impressed with its versatility. So was my wife, who has called more or less permanent dibs on it. It’s great for working in a fixed area, but sometimes you just need to go walkabout. Ryobi has an app for that, too, in the form of the Ryobi P717 Hybrid LED Spotlight. We had one alight on our doorstep recently; join us as we brighten your day with a look at its features, and see how well it banishes the darkness.

In case you’re muttering “Big deal – it’s probably just like the flashlights all the tool makers use to pad out their kits,” lighten up – the Ryobi P717 would make those other flashlights wet their pants. If flashlights wore pants. With seven 3-Watt Cree LED bulbs cranking out over 2,500 lumens, Ryobi claims the light has a beam distance of over 700 yards. I can’t see far enough to verify that claim, but in any case, it puts out a LOT of light. Here are the specs from Ryobi, followed by a quick video to enlighten you on their LED lighting lineup:

When the Ryobi P717 Hybrid LED Spotlight arrived, the first thing I noticed was how light it is. That’s “light” as in “not heavy” – the spotlight weighs just a pound and a half. The body is made of rugged plastic in Ryobi green, and the handle and front portion of the light are covered with a soft rubber overmold. This makes it much more comfortable to hold, and helps protect the business end of the light from the occasional knock.

Under the base of the light is where you connect your power source of choice. The Ryobi P717 Hybrid LED Spotlight will operate using any Ryobi 18V ONE+ battery; obviously, bigger battery = longer run time. The light is very stable when resting on its base, with or without a battery.

Although primarily intended for hand-held use, an enclosed loop on top of the light gives you options for hanging the light, from a bungee cord or a length of heavy wire, for instance.

For those missions where you’re tethered to your vehicle – while out searching for your lost pet python, or scanning mailboxes for a late-night Uber pickup – plug in the included 12V automotive adapter cord, and fire it up. Magically, the Ryobi P717 is just as bright using the 12V automotive cord as it is with the 18V Li-Ion battery.

The Ryobi P717 Motto: Let There Be Light – LOTS Of Light

Your first clue that the Ryobi P717 may not be an ordinary flashlight comes when you look it in the face. Its reflective recessed surfaces look bright even when it’s powered down – which is the only time you should look at it head-on, assuming you like functioning retinas.

Operating the Ryobi P717 Hybrid LED Spotlight is about as simple as it gets. Pull the trigger once for the high beam, once again to tone it down a notch, and once more to turn it off. Ready for the quiz? When you release the trigger, the light remains in whatever mode you selected.

While some flashlights let you narrow or widen the light spread, the beam on the Ryobi P717 isn’t adjustable. It’s not really a flashlight, though, it’s a spotlight; it focuses most of the light straight ahead, but still lights up a nice, wide swath of the surrounding area.

Even though the Ryobi P717 uses energy-efficient LED bulbs, cranking out 2,500+ lumens generates a bit of heat. To keep the light from melting into a puddle of green goo, Ryobi incorporated an aluminum heat sink and cooling fins, to help dissipate that heat. It works very well.

Taming The Dark Side

When the Ryobi P717 spotlight arrived, I fooled around with it a bit in the house during the day. I was impressed by how much it illuminated areas that were already pretty well lit, as well as how much it lit up the dark basement and attic. What I was really looking forward to, though, was seeing how well it would perform when I took it outside to play in the dark.

It was a moonless night, and once it was completely dark, out we went. I stood on our back porch, and aimed the Ryobi P717 spotlight at the alley, about 250’ away. I pulled the trigger, and Bam – a very nicely illuminated view of our neighbor’s garage, along with a good-sized swath of our yard.

I pulled the trigger again, changing to the Low setting. The Ryobi P717 still illuminated everything very well; in fact, it seemed to be a better setting for such relatively close-up viewing. The High setting was almost too bright. The neighbor pulled up in front of his garage while I was doing my trial, and probably thought a raid was in progress…

After lighting up the yard, I moved out to the street. There’s only one streetlight nearby, and the street is not very well lit. I once again fired up the Ryobi P717 on the High setting, and suddenly the street was VERY well lit. From where I was standing to the top of the hill where the street ends is about a quarter of a mile, and the blazing LEDs illuminated every reflector along the way, along with a good chunk of the roadway. After a minute or so, people were poking their heads out to see what the heck was going on. I decided that was a good time to shut ‘er down, and scurried away.

As I mentioned earlier, I’m a big fan of untethered lighting. After having the opportunity to try out the Ryobi P717 Hybrid LED Spotlight, I can say that it excels at what it does. And what it does is crank out light – LOTS of light. Over 700 yards of light? I’m not sure; our Beam Distance Measuring Meter is off somewhere being recalibrated. What I CAN say is that I seldom have the need to illuminate anything over a third of a mile away. When we hear something strange out in our farmyard at night, though, this will be my go-to light to figure out what the hell it is – from a safe distance.

The Ryobi P717 Hybrid LED Spotlight would be an excellent choice for anyone who has to do similar checking on large properties at night, search and rescue workers, lost pet seekers, and the like. For anyone using the light primarily from a vehicle, the included cord saves swapping out batteries – and also makes the spotlight a bit lighter to hold. The 6’ length of the cord limits how far you can get from its power source, though, so if you need to use it away from the vehicle, schlep along a battery.

Speaking of batteries, the Ryobi P717 is only available as a bare tool. For anyone on the Ryobi 18V platform, you’re good to go, as the light will operate on any Ryobi 18V battery. Otherwise, you’ll need a battery and charger. They’re available individually and in package deals, and often you can find another tool you need (and don’t you always need another tool?!) that includes a battery and charger for not much more than you’d pay for the battery and charger alone. Battery life on the 4.0 Ah battery was excellent during our testing. After all the indoor and outdoor testing, I left the light on Low, without recharging the battery. It kept shining for 13-1/4 hours before it finally crapped out!

Apparently the Ryobi P717 Hybrid LED Spotlight is a hit with most buyers; on the Home Depot website, it’s rated 4.7 out of 5 by 760 reviewers. Unlike the light itself, the warranty isn’t lightweight; the spotlight is covered by a three year warranty from Ryobi, and the Home Depot’s return policy lets you brighten up your life for 90 days risk-free. Snag one, pull the trigger, and light up a big chunk of YOUR world. 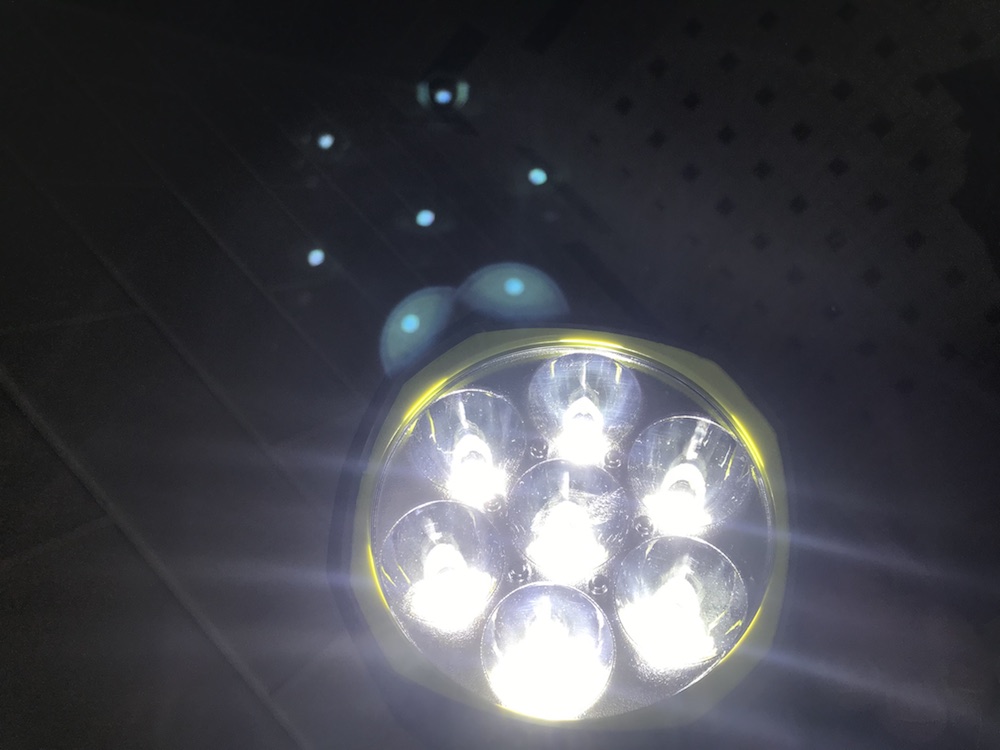