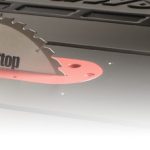 We recently published some table saw safety tips in the hope it might help you keep your finger tips.  But what do you do after you accidentally cut off your fingers?  Why, sue of course!  A recent article by Jenn Abelson from the Boston Globe tells us that “Carlos Osorio accused One World Technologies Inc., maker of Ryobi saws, of negligence for failing to include a flesh detection technology that would prevent most serious injuries, according to a copy of the complaint filed in 2006 in US District Court in Boston.” And believe it or not, Carlos won the case, to the tune of $1.5 million, even though they were asking for only $250,000. After lawyer & legal fees, I’m estimating Carlos himself will probably net about $7 for his troubles.  But it may be for a very good cause, improved table saw safety, industry-wide.

Interestingly, the article also points out that there are “more than 50 lawsuits pending throughout the United States against the major table saw manufacturers for failure to adopt the technology, which would stop a power saw blade almost instantly upon contact with human flesh.” Those of you in the know are surely aware of SawStop, the only table saw currently being manufactured with flesh detection technology.

The inventor of SawStop, Steve Gass, developed the flesh sensing technology over ten years ago. Steve assumed the current saw manufacturers would jump at the opportunity to get this kind of safety technology, but instead, he found a less than enthusiastic response when it came time to pay up. As a result, he and his partners formed SawStop, and they now sell several saws that stop the blade within 5 milliseconds of detecting contact with skin. If you haven’t seen the famous hot-dog demo, you should definitely check it out here:

I find it sad that it’s been over ten years since this technology was developed, and yet SawStop is the only company that is producing saws with that kind of safety mechanism, patent or not. I have read a lot of comments about this table saw accident case, and unfortunately, much of the commentary was along the lines of “Too bad Mr. Osorio was too stupid to use the saw safely.” I happen to know people that have lost fingers to table saws (and other power equipment), and I wouldn’t describe any of them as stupid. Frankly, if you show me any serious contractor that’s never had an accident with a tool, I will be seriously impressed. Seriously!

We’ve all done stupid things with tools, and those of us that have done them with table saws have in some cases lost fingers as a result. That’s a hefty price to pay, and it’s even more hefty when you consider that many of today’s table saws could have been outfitted with SawStop technology years ago, if things had gone a little more smoothly in the licensing negotiations.

I do have to question why someone would sue for technology that was available on other saws (SawStop), and not on his budget-priced Ryobi saw. A reasonable question is why didn’t Mr Osorio buy a Saw-Stop table saw if he wanted the kind of safety he was suing for? While I couldn’t personally justify suing in a situation like this (I’d consider it my own fault for not buying a Saw-Stop saw), sometimes it takes a lawsuit (or fifty) to bring real progress to tool and industrial safety. And if this one lawsuit winds up helping bring SawStop technology (or another similar technology) to the masses, I’m all for it, despite the personal responsibility qualms.

I think there’s also a socio-economic dynamic at play with this safety issue in general. Someone like myself, supposedly well-educated and with readily accessible information, is in a much better position to educate him or herself with safety information, than many people that wind up using table saws on the job. While safety is a personal responsibility, it’s also a responsibility of employers, government and industry. Some of you are probably thinking, “But government shouldn’t mandate safety, I want the freedom to have my lifeless body hurled from my pickup because I chose not to wear a seat belt.” Sorry dude, seatbelts are the law now, and many thousands of people have lived on to another day as a result.  Perhaps more relevant, airbags are now the norm in vehicles, and they were controversial technology when they came out too.

From another article on the lawsuit and SawStop in particular, written by Amy Hsuan in The Oregonian, “The Consumer Product Safety Commission is considering whether to create stricter standards for table saws, said spokesman Scott Wolfson. However, the standard will not necessarily benefit SawStop. The CPSC will not write a standard to help one company,” Wolfson said. “The industry can find another way to meet the standard.”  The article also goes into more detail on SawStop’s attempts to license its technology, and provides this staggering stat, “According to the Journal of Trauma, an estimated 565,670 table-saw-related injuries were treated from 1990 to 2007 in U.S. emergency rooms. The vast majority involved a hand coming in contact with the blade, and about 10 percent ended in amputation.”  That is a lot of lost fingers!

While I believe in personal responsibility, I’m also a pragmatist. That’s why even though I don’t agree with this particular suit, I’m hopeful it might lead to a world in which table saws (all of them) are made safer. Who else wants to give an (intact) thumbs-up for saw safety!

Thanks to Marc Spagnolo over at the TheWoodWhisperer.com & Dr. Michael Sykes over at ICBE.org for bringing this case to our attention. You can also find some intelligent discussion on the topic here at MetaFilter.com. We welcome your comments below!