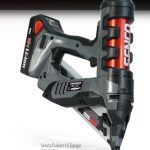 The new Senco Fusion line of cordless nailers have been on our radar for a while now. For a while they seemed a little like Nuclear Fusion (promises of a revolutionary technology that never quite seems to make it to the market). Unlike nuclear fusion (or “Nuke-you-ler” as our former president liked to call it), we’re pleased to announce Senco Fusion is not only real, but also available for purchase. We’ve been testing out their F-15 model (and 18 gauge is expected soon too), and we think we’ve gotten a tantalizing glimpse into the future of cordless nailing.

The Fusion comes in a black plastic case that’s decidedly more futuristic looking than your typical power tool case. Although the case will protect your gun from most abuse, we also found it a bit on the flimsy side, and a bit more cavernous than is needed for this particular tool. The dividers that keep the tool and included charger and battery in place broke off on their way to us. We’d like to see a little beefier construction on the case. But that’s the case, and really, like 2nd Ammendment-loving Americans, we’re here to talk about the guns. 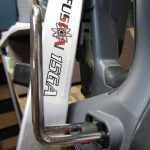 As you’d expect with it’s cutting-edge name, the Fusion F-15 looks different from your typical nailer. In particular, the Senco Fusion sports a small nitrogen tank that stores the magic gas which is a crucial ingredient to making the Fusion go. This is a sealed tank system, so it’s not designed to be refilled. The tank is well secured with a protective rubber over-molding, which also contributes to it’s high tech vibe. The flat-ish rechargeable battery made me want to use the battery as a stand to set the Fusion down between shots. Unfortunately the magazine is just a hair too long to make that feasible. As a result, the gun tends to tip over if you set it down in that natural position. The Fusion also included a framing hook which tended to annoy me rather than provide convenience. Luckily it’s not only adjustable, but removable. Enough about how it looks! How did it function?

We tested the Senco Fusion in everything from pine to solid oak and found it packed plenty of punch. In fact, at one point we had the depth of drive set so deep I thought the firing pin was dry firing. Instead, I found the nails deeply set in the wood, well below the surface. And, in terms of dry firing, thankfully the Senco engineers designed in a lockout to prevent the F-15 from firing when you run out of nails.

Just because this thing runs on Nitrogen and battery juice, don’t expect the Senco Fusion to be silent. It packs a punch and has a surprisingly loud action and a decent amount of recoil from each shot. Not quite as loud as the name-sharing F-15 fighter jet though. Our favorite sound was the subtle, terminator-esque recycling sound after each shot. You could easily imagine the Fusion attached to a robot arm of mayhem in a sci-fi movie. Movie foley sound editors should take note, the F-15 is a sound effect waiting for an audience. 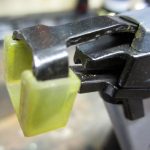 As I was busily nailing away, I almost missed that the Fusion F-15 also has an integrated LED light. It’s definitely not the brightest LED’s we’ve seen on a tool, but it’s probably still useful enough to make sense inside a dark cabinet or post-apocalyptic landscape without sun. Like our friend Doug over at ToolSnob.com, we found the business end of the Fusion to be lacking good visual reference on where the nail will actually land.

I did a test run trying to hit a dot I made on a piece of scrap and found my best guess to be about 1/16-1/8″ off the mark. There’s also a very easy depth adjustment dial, although the icons left us squinting. Simpler and more clear icons would have been handy, but it’s also not rocket science to determine if you’re dialing the tip closer or further from the wood. 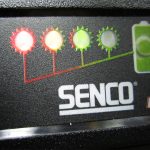 With many of the newer cordless tools including some type of on-board battery gauge, we were happy the Fusion is no exception. Unfortunately the gauge is built into the battery itself and you have to press a button to activate it. In future versions, we’d like to see a more conventional implementation that gets activated by a trigger pull. Regardless, its handy to have the gauge to keep you up to speed on how much juice you have left. As a friend of mine pointed out, as long as you’ve got electricity to charge your batteries, then the Fusion appears to be a bit of a perpetual motion machine. 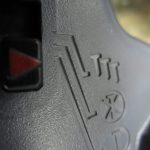 When you’re ready to lock and load, there’s a bump fire option, which we’re not big fans of for two reasons: 1) Safety. It’s easy for someone to get sloppy when they’re bumping the gun rapidly to fire it. 2) Precision. It’s not a framing nailer, so presumably users are going to want some degree of precision on where those nails go. Precision and bump-fire typically don’t go hand in hand. Anyway, it’s there if you want spray-and-pray-type nailing experience. If you’re nailing briskly in single fire mode, you’ll need to make sure you fully lift the shoe off the work surface or the gun won’t fire.

We didn’t experience any jams during our trial runs, but we did play around with the jam clearing mechanism. Clearing a jam involves removing the whole magazine assembly. It’s simple to do, but compared to the small flip out nosepiece I’m used to on my Porter Cable air nailers, the mechanism for the Senco Fusion just seems a bit clumsy. Since we didn’t actually experience any jams, we’re not losing much sleep over it though.

Some of the fit and finish on our demo model was a little looser than we’d like, and we had a few minor quibbles with design details. But for a first generation of this new technology, we think the Senco Fusion line offers a lot of convenience and performance. The Fusion F-15 functioned very admirably, especially when you consider it wasn’t hooked up to a compressor. Gone also, are the fumes and replacement expense you get when using fuel cartridge technology from cordless nailers like Paslode. If the long-term reliability and performance of the Senco Fusion lives up to Senco’s claims, then we think there may soon be little reason to haul your air compressor to most jobs. The Senco Fusion represents the most user-friendly, effective and promising cordless nailer technology that we’ve seen thus far.

for just under $400, or if you’re reading this review in September of 2010, just enter a comment on any article on HomeFixated.com and you’re automatically entered for a chance to win a brand new Senco Fusion F-15 at the end of this month’s Free Stuff Giveaway.