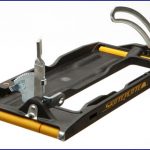 So–sometimes I don’t end up being the most right I’ve ever been.  That’s not saying I’m wrong–but you know–I can’t do that sort of thing publicly.  In fact, I can’t do it privately either.  I’ll tape a note to the dog, or just mumble an apology from inside the closet or something.  It’s just the way it is…such is life.

Woodman Tools sent HomeFixated a couple SkatePlates to test out–and I was grumbling to Marc about how I don’t like to add things to my saw, that if my saw needed an aftermarket item–Skil would have already put it on there.  That didn’t stop me from ripping open the package to get my hands on it and immediately install it on my saw.  (I do like new stuff). The SkatePlate is designed to make your use of a circular saw easier–and more accurate.  There are rollers on the front and back of the durable plastic construction saw shoe that track across the wood, and are installed in a manner to make your cut extremely precise.  As the Lead on more than a few framing/construction crews–I have often had the good fortune to teach young carpenters how to use a circular saw.  Some of these fellows were better than others.  A general rule of thumb when on a framing crew is:  Straight is good.  When ripping or even cross cutting an expensive sheet of OSB sheathing–it is not generally advisable to make cuts that end up looking like a map of the Amazon. 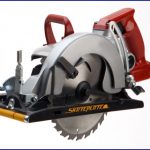 The rollers on the SkatePlate take the “wiggle” out of using the saw, making it easier to cut accurately.  Of course–it doesn’t “steer” for you–but it will track across the material to be cut with a purpose–rather than relying on your hand and eye to follow the line.  One thing I did find is that the speed at which it will track across the material is somewhat surprising at first–meaning:  pay attention.  I also was surprised by the drop that follows when your roller goes off the edge of the material.  It’s not a deal-breaker, but something to be aware of.

Currently the SkatePlate is available for the Skil HD77, Skil MAG 77, Makita Hypoid and the Bosch 1677MD.  I am guessing that Woodman Tools’ idea on this front was to make it more geared toward your commerical grade carpenter–but I think it could be a definite benefit to more of your DIY type crew as well–since it does take accuracy to a new level with a circular saw.  If you are doing an addition, deck, and especially  roof framing:  The SkatePlate will make your life a lot easier.  Years of being a “cut-man” on a framing crew taught me that every bit of performance you can get out of your saw is a good thing.  More time to stand around and BS.  Good times. 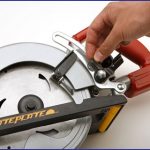 I’ve been doing quite a bit of sawing with ol’ Hackey these days–and the SkatePlate is performing admirably.  Orginially–I was going to install the SkatePlate for a bit “just to see how it went”.  I’m not sure I will take it off now.  The construction is durable, and solid.  Before I was enamored with it–my first test was to drop it.  Repeatedly.  Then I put an old saw on it–and did it again.  A lot.  The SkatePlate didn’t break, explode, or so much as even chip or crack.  For anyone that has watched in horror as their saw has tumbled off a roof–landing directly onto a lift of OSB plywood–you know what I’m talking about.  The shoe of your saw will be bent, untrue and pretty much useless.  I’ve replaced at least two shoes and one that I think the guys did a “quick switch this before the boss sees” on Hackey.  I’ve yet to figure out how I could possibly bend the SkatePlate.  About the only issue I see with it is potential wheel breakage–but they easily come out, and could be swapped out. 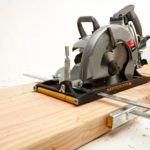 With a nice sharp blade–the SkatePlate acts like a sled, moving your saw across the material with low friction, and no annoying grab.  Many times I’ve taken a palm sander to get rid of burrs, scratches, and other impediments on my metal shoes.  No longer.  Woodman Tools also sent me the SkateGuide which is their take on the rip guide that comes with a lot of circular saws.  Most of the time–these things are pretty useless, and at this point when making a rip with a circular saw–I just eye ball it–or use a table saw.  The SkateGuide has the same roller type as the SkatePlate–and works as well as advertised.  If a table saw is unavailable, and you want to make a quick, accurate rip:  SkateGuide will do nicely, even if it’s not my first choice.

Despite my initial misgivings, the SkatePlate is a definite bonus to an existing circular saw.  It tracks nicely, is well built, and absolutely ups your accuracy.  There aren’t a lot of products that can combine all three.  If I had to knock the SkatePlate at all, it was after my install I had a bit of a hard time getting the Quick-Tilt mechanism to move easily.  Nothing a little lube couldn’t fix–and based on how well the rest of the SkatePlate is constructed:  most likely not a common issue.

The only after market item I have bought for my circular saw was a rafter hook.  I know what I want out of a saw, and there just isn’t a lot of gadgets, or bells and whistles that my saw needs.  The rafter hook is staying–and so is the SkatePlate.  I wouldn’t recommend sawing with your eyes closed…but with this product:  You probably could.

You can order the SkatePlate direct from Woodman Tools for about $70, as well as the SkateGuide for about $20.