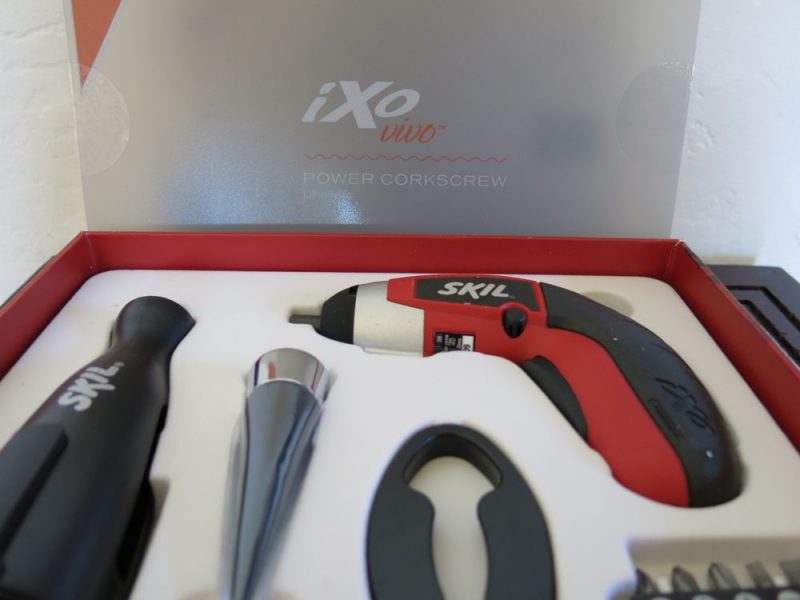 Drinking and driving is not a good idea. This applies to driving a vehicle and driving screws too. Our lawyers made us say that. Now that the disclaimers are out of the way, let’s talk about the Skil iXO and the Skil iXO Vivo that were recently sent to us for review. The Skil iXO is literally a pocket-sized screw driver. Let’s be fair, at 4v delivered by an internal Lithium Ion battery, don’t expect your pants to be blown off in a whirlwind of raw, unbridled, tourque-tastic power. What you can reasonably expect, is a very portable screwdriver for household tasks, light duty work, and, in the case of the iXO Vivo, opening a bottle of wine. 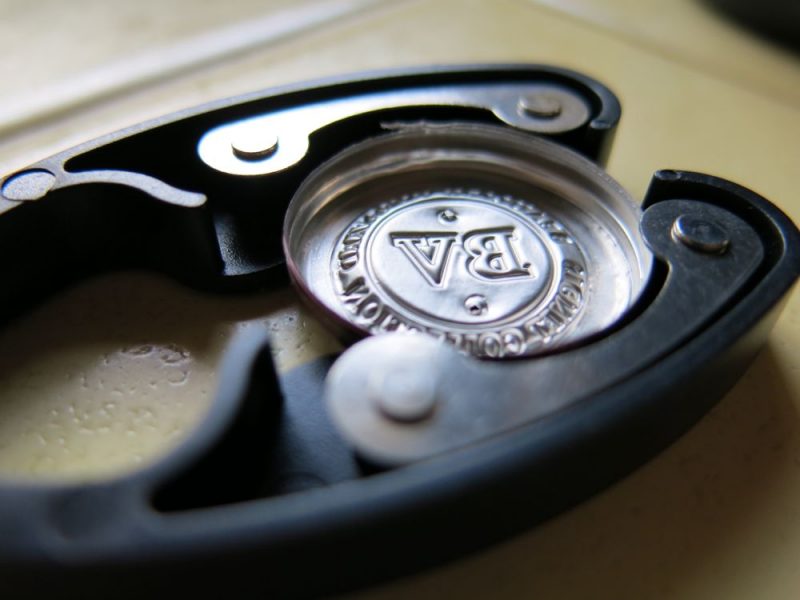 We’ll kick things off focused on the wine, because that’s how we roll here at HomeFixated. Actually, we’re more focused on beer typically, but we suspected the Vivo works poorly with bottle caps. The iXO Vivo kit includes the iXO driver, the corkscrew attachment, a Skil-branded bottle stop, a foil cutter, charging wall-wart, and several driver bits – just in case you want to use it as a screwdriver too.

First, a warning. If you like really huge bottles of wine, keep in mind the iXO Vivo has a maximum capacity of 30.5 mm. So if you had hopes of popping open that Magnum of Château Mouton Rothschild, you’re going to have to do it the old-fashioned way. For a quick overview and to see the iXO Vivo in action, check out our video here: 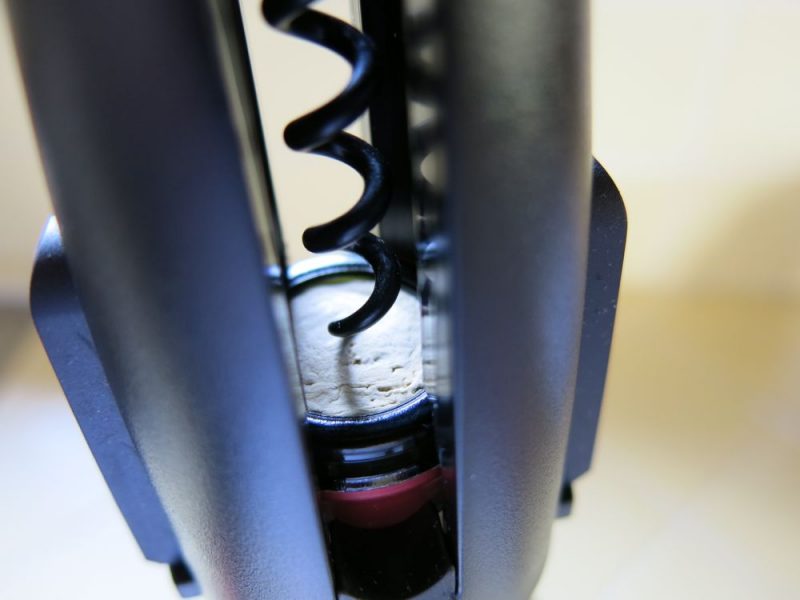 The downside. . . the iXO Vivo isn’t as compact, easy to store and quick to grab as a conventional bottle opener. Some folks might be more inclined to grab the old corkscrew than monkey-around with the separate components of the iXO Vivo. I also tend to be a little picky about the design of corkscrews. Their tips come in two general varieties: sharply pointed and more circular. I find the sharply pointed types will more accurately penetrate the center of the cork, and have less risk of damaging it. With that said, the Vivo appeared to do just fine with its more curved tip. 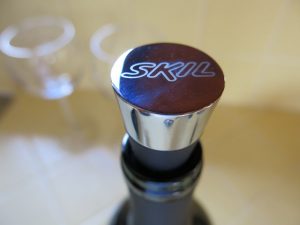 The upside. . . the iXO Vivo combines alcohol and power tools in a way that isn’t likely to lead to dismemberment or disfigurement. I’m pretty sure Skil will be using that line in all their future marketing materials. Sure, it’s a bit of a novelty product, but it’s also a fun way to open wine. Whether it becomes my go-to method of opening wine remains to be seen. It also has the added benefit of being a handy screwdriver, which leads us to delve a little deeper into usage for the iXO that doesn’t involve wine.

The iXO as a Screwdriver 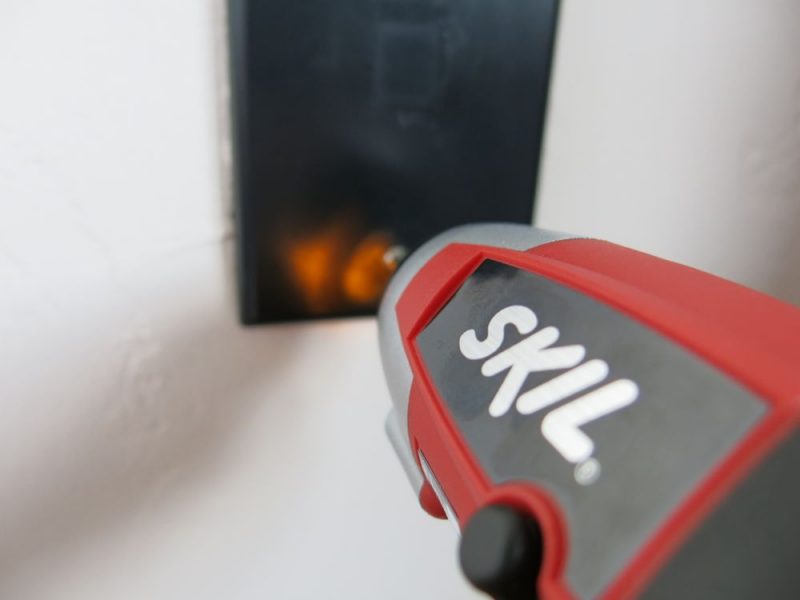 You know those action movies where the protagonist has a gun stashed in every room, including the bathroom near the shower, just in case a bad guy tries to get the jump on him? I’m the same way, but instead of guns, I like to keep a screwdriver in every room. You just never know when some screw is going to wiggle lose. With screwdrivers sprinkled around the house, I rarely have to procrastinate tightening things up. Let’s face it, if you have to walk outside, go into the garage or shop, grab a screwdriver and then trek all the way back inside, somehow loose screws have a way of not getting addressed until something completely falls apart. By the way, I don’t recommend sleeping with screwdrivers under your pillow, especially cordless drivers.

I used the iXO on several light-duty screwdriving tasks around the house (completely sober I might add). The minimal LED light still came in handy inside cabinets and dark drawers, illuminating the screw just enough to avoid the need for a flashlight. The tool definitely sounded like it was laboring a bit on some tasks, but it always had enough power to handle reasonably-sized screws. If you’re driving really beefy screws or large numbers of screws, you’ll definitely want to move on to more robust 12v or 18v options. One thing I wasn’t impressed with on the iXO is the direction switch. The switch (which is essentially a button you depress from the left and right sides of the tool) felt flimsy. It also had a very light action which meant it accidentally slid to lock or the other direction during handling of the tool. Not a deal-breaker, however you’ll want to be aware of the switch to avoid unintentionally pressing it. The rubberized handle, curvaceous backside and oversized trigger make for a nice ergonomic feel. We also liked how compact the tool is, making it very nimble for the hard-to reach screws. The iXO is made even more versatile with the optional offset and right angle adapters we mention in the video.

Although you may not buy one for every room, the Skil iXO a great “kitchen drawer” tool. It’s compact, holds its charge decently, and is readily accessible for those quick little projects and repairs that tend to pop up. In a stretch, I could also see it being tossed into the tool belt of an electrician for knocking out a bunch of switch plate covers (however the non-swappable battery, low power and relatively long charging times make this tool best suited for homeowners). If you’re looking for a novel way to open wine without breaking a sweat, the iXO Vivo delivers not only a handy power tool, but also a shortcut to some refined refreshment. If only it opened beer!

If you happen to be reading this before the end of January, 2013. . . be sure to check out our monthly free stuff giveaway where you can win both the basic iXO and the iXO Vivo kit, for FREE! If you’re reading this after the giveaway (or you just don’t like winning free tools), you can find the iXO in various configurations and price ranges of $30 to $50 via the Amazon links below: