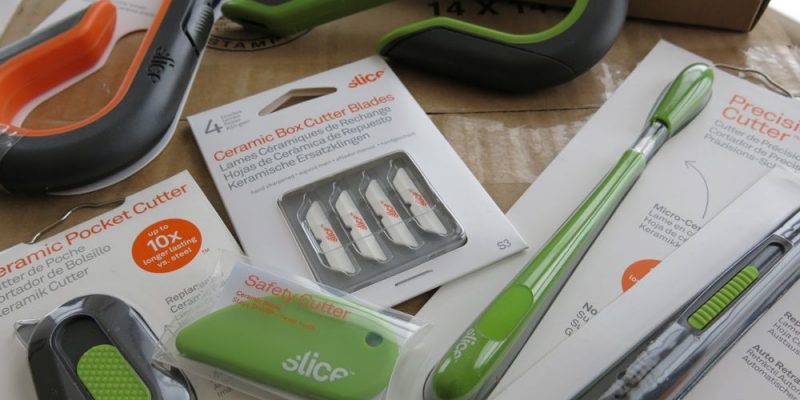 Earlier this year I was sprinting up and down the aisles of the National Hardware Show hunting down the coolest tools and products to share with HomeFixated readers. A booth made almost entirely of cardboard caught my eye – partly because of the unusual array of colorful tools on display, but also because there was a man there who looked like he was on a mission. It was there that I met TJ Scimone and his impressive array of Slice cutting tools, featuring state of the art ceramic blades. But TJ wasn’t just there to show his unusual products off, he was there to help his son.

In 2008, TJ founded Slice as a way to fund long-term care for his son Alex, who is autistic. Not only is this a cause TJ is passionate about personally, but it’s also one he supports with his business. Slice donates a minimum of 1% of all product sales to fund autism research. That’s not all that makes this brand unique though. Slice is a fascinating blend of dramatic form meeting incredibly useful function. Many of Slice’s products are designed by a who’s-who of designers including Yves Behar, Michael Graves, Scot Herbst, Alfred Muccino and Karim Rashid. The result is cutting tools that not only look amazing, but cut amazing too. And they’re much safer than your trusty old box cutter or utility knife. 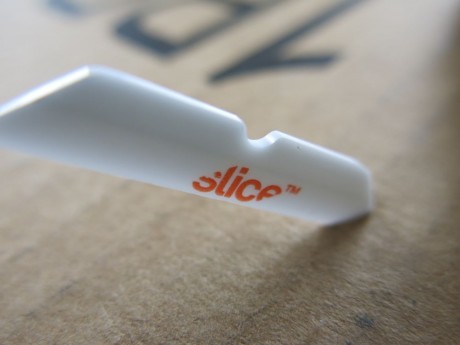 Design isn’t the only thing that exhibits thinking out-of-the-box at Slice. All of the particular Slice cutting tools we tested utilize ceramic blades made from Zirconium Oxide. Originally perfected by the Japanese, these high-tech blades are razor sharp, yet will never rust. According to Slice:

Metal knives are rated 5.5 on the Mohs hardness scale compared to ceramic knives at 8.2, only two steps below a diamond. Harder edges mean sharper edges that maintain sharpness longer, cut better, and require sharpening far less frequently. In fact, depending on use, you can go years without sharpening ceramic blades. These blades are also chemically inert, non-porous, non-stick and impervious to acids, salt and rust.

They can also solve global warming and eliminate poverty. Alright, I took a little liberty with those last two claims, but even so, these blades have some very impressive attributes. Slice sent us a batch of sample product and what follows are our several mini-reviews on blades you’re probably going to want in your office, kitchen, shop, warehouse, or anywhere else you tackle cutting tasks.

At HomeFixated, we open a lot of boxes. In fact, in addition to my official title of Executive Editor, I’d also like to add “Box Opening Pro.” Not quite as impressive on the business card though. Unfortunately, the tools for opening boxes, or, worse yet, cutting boxes, are shockingly ill-suited for the job. Box cutters offer no hand protection, and a quick slip can lead to disastrous cuts and injuries. And, traditional utility knifes are worse yet, as they have the potential to slice into and damage whatever precious cargo is inside the box.

Slice makes two box cutters designed to make your boxes beg to be recycled. In fact, they’re the first box cutters to utilize ceramic blades. One version is a manual, three position box cutter, the other is an auto-retract version. While the auto-retract offers valuable safety benefits, we didn’t like it nearly as much as the manual version. Having to hold the blade in position while cutting just didn’t work well for us. However, it’s likely to still be prized for its box cutting prowess for businesses with workers who are prone to injury with other cutting tools. 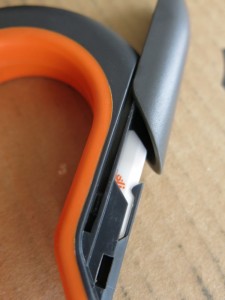 We did, however, LOVE the manual three position box cutter, which also happened to win a coveted Red Dot Design Award. The ceramic blade features a rounded tip far less likely to injure you, and the blade at full extension is just long enough to slice and dice a thick cardboard box. The double-sided blade has a sharpness level that’s claimed to last 10x longer than steel. And, because the hand-sharpened blade itself is so compact, you can cut curves and angles into cardboard with ease.

The unusual curved handle design also doubles as a bit of hand protection, particularly from those evil heavy duty box staples I’ve cut my hand on more than once. The design also makes it easy to hook onto the outside of a pocket, on a pegboard, or even in a tool belt. The tool features onboard spare blade storage, and replacement blades are available in packs of 4. Price – $19.99

While we didn’t like the auto-retract version of the box cutter, for a small blade that’s designed to stow in your pocket, it’s a must-have feature. The Slice Pocket Cutter is a tiny tool that’s not much bigger than a couple postage stamps. It’s extremely handy to have around, and with an onboard magnet, we keep one stowed on our fridge for quick cutting tasks. The Slice Pocket Cutter features the same blades as the larger Slice Box Cutter, which means rounded tips, sharp blades, and even a no-tool blade change. At just $9.99 it’s great to have a couple of these around. 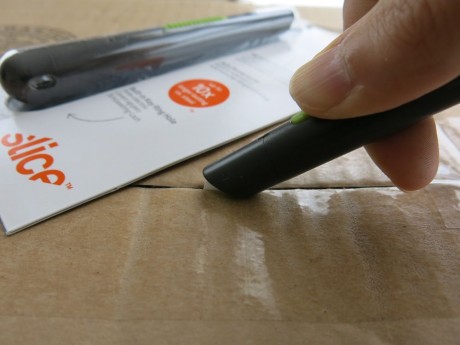 This cutter from Slice is like the Pocket Cutter, only in pen form. It has all the same features, minus the magnet, and it utilizes the same ceramic blades. The pen cutter features a clean, tapered design that’s easy to hold even when holding the rubberized blade extension slide in place during cutting. I keep one in my pen drawer for quick access when needed. Price – $12.99

Whether you’re cutting out coupons, removing shrink wrap, or going after one of those evil, evil, evil retail blister packs that send so many people to the ER each year, the Slice Safety Cutter is very handy. Like the Pocket cutter, it has an onboard magnet. Unlike the Pocket Cutter, the Safety Cutter has a tiny ceramic blade that just barely protrudes from the outer edge of the tool. The blade is so small, it’s sometimes used in “knife-free” facilities like certain prisons, courts and holiday get-togethers with the inlaws. Its rubberized grip makes it useful for both right and left-handers. At just $5.99 a piece, you can’t afford not to have a couple of these around.

The X-Acto knife replacement, the Slice Precision Cutter also sports a Zirconium Oxide blade. The blade is a small fraction of the length of a typical craft style razor blade, and is far less likely to cut you. If you’ve ever used a craft knife like an X-Acto before, chances are you’ve also been cut by one too. The Precision Cutter is made with a very grippy and comfortable, rubberized grip. Its ergonomic shapeliness also makes it a pleasure to hold and use. Our only gripe with this product is that if you’re cutting something thick, the blade can be too short. Luckily, Slice just released a craft knife replacement blade for those that prefer a more traditional X-Acto style blade (see below). We also would have loved to see a replaceable blade used in this product. Those concerns aside, it’s a handy tool for precision work and still a bargain for any left or right handed crafter at just $7.99.

It takes a lot of cutting to dull these blades, but if you’re a power user you’ll be pleased to learn that replacement blades are available. Every pack contains four double-sided, rounded-tip ceramic blades. They’re designed to fit Slice box cutters only, so don’t get any crazy ideas about mod’ing them to fit your utility knives. Price – $19.99

One of my more eccentric gardening habits is growing banana trees. When it comes time to harvest a “hand” of bananas, I’ve found cutting them off with a utility blade works best. Unfortunately, the sticky sap from the tree seems to almost instantly rust and subsequently dull the utility blades I use. Wet usage (or storage) that normally rusts conventional utility blades is just one issue that is addressed by Slice’s new ceramic utility blades. These blades are great to address cutting tasks thicker and more varied than Slice’s box cutters can handle. We found the blades sharp, but also noticeably thicker than many steel utility blades. We test fit them on several utility knives and found they fit fine in some and not at all in others (due to blade thickness). If you want to give ceramic cutting a go with these replacement blades, I’d suggest you do so in a utility knife that doesn’t have super tight clearance for the blade insertion. A pack of two will set you back $19.99. 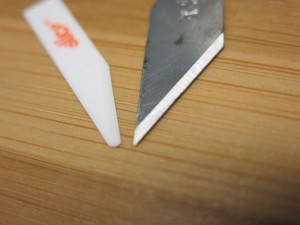 One complaint we had with Slice’s Precision Cutter reviewed above is that the blade, while very precise, can’t cut much in the way of thickness. Most of the time that’s not much of an issue, as most craft cutting happens on very thin materials. However, sometimes you need to cut through something a little thicker. For those situations, Slice has just released a line of craft knife ceramic replacement blades. They fit fine in a couple old X-Acto knives we had laying around (despite the handles being designed for some of the wider X-Acto blades), and I found Slice blades to cut well. A pack of four runs around $19.99

Slice is a company not afraid to think outside the box (and they even cut the box too!) Their diverse set of cutting tools combine stylish, functional design, with the benefits of razor sharp ceramic blade technology. The only downsides we really see with this class of tools is that the ceramic blades seem more fragile than their steel counterparts. We had a few blades show chips and nicks after more aggressive cutting tasks and cutting sharp curves. Interestingly, even the blades with nicks still remained sharp and usable. We’d also like to see more heavy duty (less plasticky) versions of some of their more robust products like the Slice ceramic box cutters. Aside from those quibbles, we think the ceramic tools from Slice offer a lot of benefits.

Since Slice is on the cutting edge of sharp new implements, we have a couple tools we’d like to see next in their product lineup: a pocket folder clip knife for a more typical pocket knife replacement, and, a hook knife for vehicle emergencies, cutting cords, vinyl flooring, etc. With that said, there are not a lot of holes in the Slice product line. Whether you’re a crafter, a warehouse worker, or just a typical homeowner, Slice has several products that you’ll find indispensible when it’s time to slice and dice. Check out Slice on Amazon