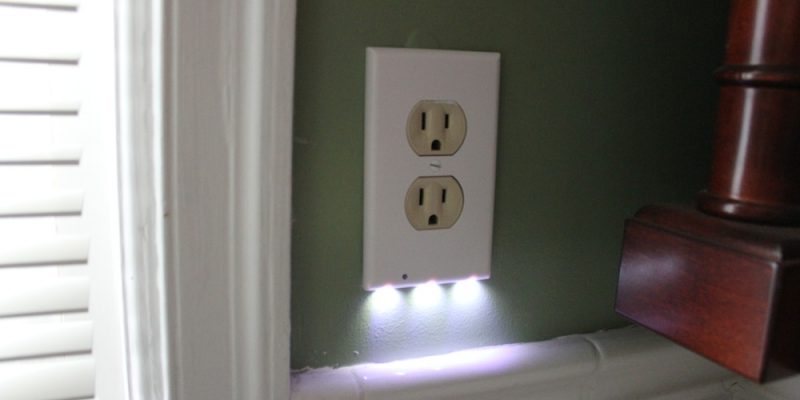 My wife is a night-light fanatic. We have little lamps and night-lights all over the house – they’re in the family room, the hallway, the front room, the upstairs hallway, the kids’ bathroom. The only place we don’t have one is in OUR bathroom; she claims the green light coming off the tiny LED on the fan timer is all she wants. I figure that will last until the first time she falls into the toilet, after failing to notice the seat is up. Anyhow, all these lights are fine, should we ever feel the urge to go stumbling through the house in the middle of the night. Unfortunately, it seems like there’s always a bulb that needs to be replaced, and the lights take up valuable outlet space (hey, I might need to recharge the battery for my impact driver, and my iPhone, or any number of important things!) In a recent attempt to restore marital harmony, the folks at SnapPower sent us some of their SnapRays Guidelights to evaluate – read on, and you will be enlightened!

The SnapRays Guidelight is actually a brilliant design. From the front, it looks exactly like a standard receptacle cover, except for a small dot in the lower left corner. That’s the Gamma Death Ray, which vaporizes unwanted guests. Oops, wait – actually, it’s a light sensor that automatically turns the LEDs on in the dark and off in the light. Not quite as cool as an intruder death ray, but probably less likely to land you in prison.

Your next clue that it’s NOT just a standard outlet cover is the two little rubbery arms sticking out the back. These little rubbery arms each have a small metal contact area, and as the little arms hug your receptacle, they contact the wiring connection screws on both sides. While hugging a power receptacle probably isn’t something YOU want to try, it works out great for the SnapRays Guidelight – that’s how it extracts power to fire up the three LED lights on the bottom.

The SnapRays Guidelight, a Snap To Install

Got a minute? That’s about all you’ll need to install the SnapRays Guidelight. The SnapPower installation guide recommends you turn off the power at the breaker before proceeding. Next, back out the screw (or two screws, if you have the Decora-type plates) from your outlet. Now you just slide the unit into place, making sure the little arms aren’t blocked, so they can make contact with the screw terminals. Tighten the screw(s), and you’re done – just flip the breaker on and wait ‘til it’s dark. To test the unit, you can hold your finger over the light sensor on the front; the lights should fire right up.

If your light doesn’t blaze into action, the little instruction pamphlet that comes with the SnapRays Guidelight has an excellent troubleshooting section. This is actually one of the best sets of instructions I’ve seen—very clear and thorough, nicely illustrated, and obviously written by a native English speaker. In the unlikely event the guide doesn’t resolve your problem, there is a web address listed with up-to-date solutions for a variety of installation issues.

Most homes have the outlets installed with the slots above the grounding hole. In a couple of the places I wanted to install the SnapRays Guidelight, the outlets were installed upside down, with the slots on the bottom. Since the light is designed to operate only when the LEDs are on the same side as the ground, this will result in the three LEDs shining their little lights upward. If that works for you, you’re set. I wanted them aimed downward, though, so my bunny slippers would be nicely illuminated.

The fix is simple. In this case, you really want to be sure the power is off. Then remove the cover plate, unscrew the top and bottom screws that hold the outlet in place, and carefully wiggle it out of the box. Some boxes are really packed with wires, so make sure you don’t disconnect anything while you’re maneuvering the outlet. Slowly rotate it so the ground hole is pointing downward, and carefully tuck it back into the box. Tighten up the two retaining screws, install the SnapRays Guidelight, and flip the breaker on. Your LEDs are now shining downward, and all is right with the world.

I think the SnapRays Guidelight is a great little product. It needs no wiring or batteries, provides a good amount of light, is unobtrusive, and it’s simple to install. According to the SnapPower folks, the light costs less than ten cents a year to operate, and is estimated to last 25 years. Apparently a lot of other people think it’s a great idea, too – their Kickstarter project goal was to raise $12,000. They ended up with over 9,000 backers, and raised a total of over $480,000! (Our esteemed leader Marc credits this primarily to our early press coverage in this article from the International Builder’s Show in February). The SnapRays Guidelight is available directly from SnapPower in white, almond and ivory. The price ranges from $12-15 each, depending on the quantity ordered. Get some, and light up a little chunk of YOUR world! 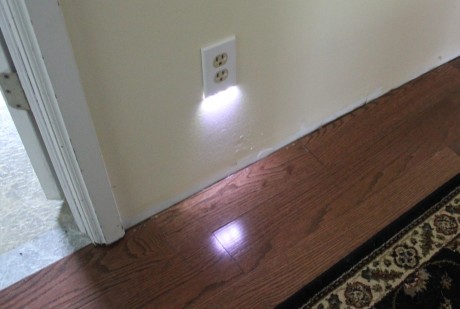