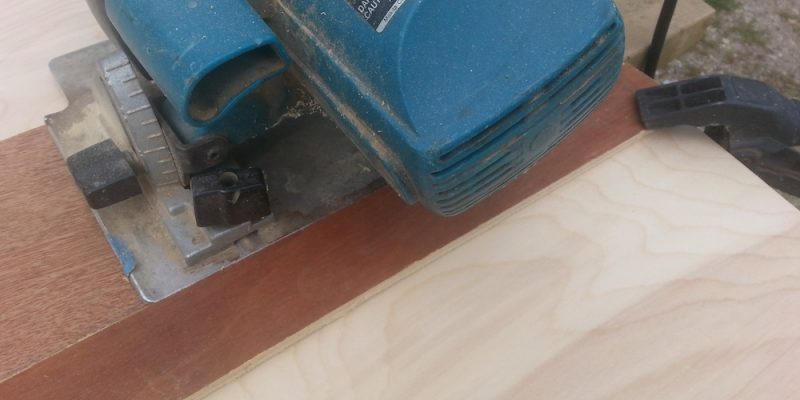 Track saws, also known as plunge cut circular saws… If you are a tool nerd, you know that these babies are HOT! Every tool company seems to be coming out with one these days. I know several friends with small, one-man shops like mine who are loving their new, high dollar track saws for processing sheet goods. Over here, I’m still relying on “old blue,” my 19 year old workhorse Makita circular saw and a straight edge. I’m so tempted to go big and drop some major coin on on a “real” track saw, but… do I really need it?

I first got hip to the track saw thing when a woodworker pal of mine bought the Festool TS55, which was one of the first, if not THE first of the modern track saws. I immediately saw his attraction to it. First, he is a MAJOR tool nerd. He is one of those guys whose shop is always spotless, and everything is top of the line. He doesn’t process a lot of sheet goods, so his table saw is not really set up for that…let’s just say that rastlin’ ¾” MDF is not his thing.

The tool is undeniably sweet, with its soft-start, plunge feature and dead-straight accuracy. But my first thought was… “ Six hundred clams for a saw you pull out once a month?!? By God, I have been pre-ripping big sheets with Old Blue for nigh on 20 years, and then going to the table saw. Always worked fine for me!” My next thought was… “Holy crap! If pre-cutting every one of those sheets of plywood took, say five minutes, times the number of sheets of plywood I process per year, times 20 years… DAMN! That’s a lot of hours!” Six hundred samolians was starting to sound reasonable.

Now, if you are a weekend warrior cutting up some plywood to make yourself some built-ins, I’m still a big proponent of making a hillbilly track saw. Masonite or ¼” plywood are good, stable materials (and cheap.) Glue one thinner strip on top of the other, and then using the top strip as your straight edge, rip the lower piece. This gives you a way to align the guide without measuring the backset of the saw, and creates a nice sacrificial edge that will help prevent tearout in veneer plywood. A couple of hand clamps to hold it in place, and you will be making very straight cuts in no time. You can even rig up a dust collector hose to help minimize the mess.

Want to go a little more high tech? Our sponsor Rockler offers a nice ripping guide they call the “Low Profile Straight Edge Clamp System” for $90 that looks nice, but basically does the same job as my el-cheapo system. However, if you are doing regular processing of sheet goods, particularly in a one man shop, it’s time to think seriously about the tracksaw.

Since gaining interest in track saws, I have had the chance to try out the Festool, the Dewalt and the Grizzly, and have looked at the Triton and Makita at the local tool store. Honestly, of the ones I tried, there just is nothing in the same league with the Festool. BUT, the mid-priced Dewalt was quite good, and even the Grizzly wasn’t terrible, and at the $250 price tag, I’m thinking that you actually might get more than you pay for. It is a bit of a clunker… sort of a Kia to the Festools Mercedes. To extend the analogy, I would put the Dewalt somewhere in the Lincoln range. Sturdy, solid, not the slickest design. Now I’m wondering… is the Makita a reliable Subaru?

For many years I liked Makita tools for their value, and their tracksaw looks nice. On paper, the Makita SP6000J1 stacks up pretty well with the more expensive saws. Side by side with the similarly priced Triton, the Makita saw has a better, sturdier feel. And, in the course of writing this article, the new Woodworkers Journal came out with a cover story on track saws, and named it the “Best Value.” It may be time for me to try out Makita again. Keep your eyes open for a plunge / track saw review coming soon to a HomeFixated post near you!

For now, it’s me and Old Blue.