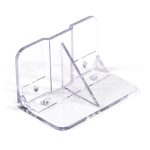 With names like Snojax and IceJax you might think that we’re talking about characters from a spin off version of Street Fighter. Snojax vs. Chun Li…Round One, Fight! However, these polycarbonate cleats are the brain child of the late Jack McMullen and are manufactured in Mechanicsburg, PA (and really if you’re going to buy anything shouldn’t it be from a place with mechanic in the name, it just says they know what they’re doing).

SnoJax are a snow guard placed on metal roofs to stop large amounts of snow from sliding off the roof as the snow begins to melt. Picture the scene from Grumpy Old Men when Jack Lemmon is spraying water on the porch roof of Walter Matthau so when the door closes Walter gets dumped on. Now imagine as you walk into a Home Depot and an epic avalanche rains down, pretty sweet right? Instead of scraping bodies up after the spring melt, snow guards like SnoJax are installed on the flat parts of metal roofing panels and help hold the snow or ice so that it slowly melts in place or at least slides off in smaller, less deadly chunks. They’re even great for home use; whether protecting your shrubs, cars, or wallets from lawsuits.

You may be wondering to yourself: “Self, why SnoJax?” Well, first see a shrink and then listen to why we think they are potentially awesome. First, even a Neanderthal-esque guy like me can install them without a professional’s help (like I’d ask anyway). With that said, don’t attempt installation if you’re not well versed in the appropriate skills (in particular, safety when working on ladders and roofs). Second, there are two easy methods of installation (see boring video below). They can attach to the roof using a super duty adhesive or you can attach them with screws. Finally, because they are made from polycarbonate plastic they: are UV stable, don’t rust or stain like metal snow guards might, don’t get brittle in the bitter cold, and they don’t stick out visually like metal guards would.

So, unless you live in Miami and are only concerned with coconuts falling off your roof, (they probably make something for that, CocoJax?), check out the product line that SnoJax has to offer. Prices on most vary from about $1.75 to $5 per piece, and you can order straight from the SnoJax web site.