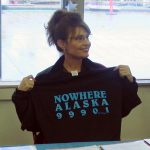 Today marks the first official day of the STAFDA (aka Specialty Tools & Fasteners Distributors Association) trade show in Phoenix Arizona. In case you’re not hip to STAFDA, it’s a major trade show and a super venue to see all the latest and greatest tools. It’s open to STAFDA members only, and the show itself will be running today and tomorrow (Monday and Tuesday, November 8th and 9th). It’s HomeFixated’s first year attending and covering the event, and we’re stoked! When we first looked into it, we were a bit surprised to see none other than Sarah Palin would be the keynote speaker Monday morning. Huh?

Maybe I was confused. Was STAFDA actually a ultra-right-wing cabal, covertly trying to rid the US of those pesky Democrats? Are all Specialty Tool and Fastener people members of the Tea Party? Did I accidentally join a political action committee? I’m pretty sure STAFDA is about tools, but the keynote speaker choice does have me stumped. Maybe it’s a symbolic gesture in honor of McCain’s home turf in AZ?

Sarah Palin, aka “Governor Palin“, was also the keynote speaker at the February inaugural Tea Party convention in Nashville, Tennessee, and was paid a $100,000 speaking fee. I sure hope STAFDA got a better rate than the Tea Party. I’m betting they did, since Palin coincidentally is releasing a second book later this month. The book is called, Women, The Tea Party, and Power Tools – The Hidden Connection. Actually, it’s called America by Heart.

All this Palin intrigue left me with a difficult decision. Do I abandon my wife and daughter a day earlier than needed for the trade show so I can be there for Palin’s keynote? Believe me, I grappled with this for a long time. Hotels close to the convention run over two benjamins. Ultimately, I decided Sarah Palin wasn’t worth $250/night.

If you could care less about what Sarah Palin has to say, and are more interested in tools, fasteners, and other cool new products for home improvement and DIY, you’re in luck! During the show I’ll be scurrying around hunting for cool tools, and can’t be bothered with a laptop (it’s like an anchor). Instead, I’ll be tweeting noteworthy products (probably with pictures too). So if you’re not already one of our many millions of followers on Twitter, get with it! Oh wait, we’re not Ashton Kutcher.  Oh well, all the more reason to follow HomeFixated on Twitter.  Not hip to Twitter? Don’t worry, we’ll continue our tradition of trickling in more detailed coverage in future articles on HomeFixated.com.

If you’re not already on our weekly newsletter list (with a summary of each week’s delectable HF content), it’s a great way to never miss something you might actually care about on our site.  You should totally subscribe. Seriously. In the meantime, stay tuned for great new stuff to feed your tool cravings, courtesy of HomeFixated at STAFDA.