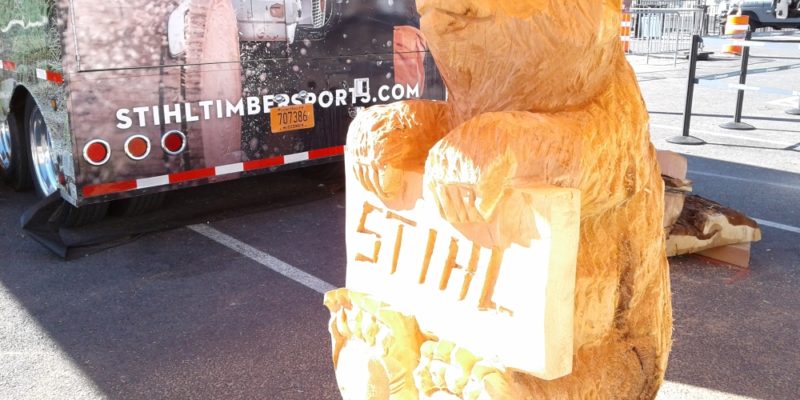 As an avowed chain saw guy, my visits to the Stihl booth at the 2020 World of Concrete show are among my most exciting. One big highlight of their booth this year was the US introduction of the MS 500i chain saw with electronic fuel injection. Yep, the first modern chain saw without a carburetor. The basic specs for this new saw are 79.2cc, with 6.7 hp/5kw of power, placing it in between the MS 462 and MS 661 in the brand’s lineup of pro forestry saws. But whether you’re into gas chainsaws or electric models, read on for what’s hot and new in the world of Stihl Chainsaws. We’ll even talk about a chainsaw that’s not a chainsaw. Intrigued?

Stihl started with fuel injection technology several years ago on their TS 500i Cutquik concrete saw and now it’s being put to use for cutting wood too. One major benefit of electronic fuel injection is easier starting, with no choke to set, and no problems with flooding. Instead of fiddling with full choke, half choke, or no choke settings, you simply pump the purge bulb a few times and pull the starter rope. Another major benefit is the efficiency of the fuel injection system, which gives the new MS 500i the greatest power-to-weight ratio among all of Stihl’s saws. I wouldn’t be surprised if this feature is introduced on other new saws from Stihl, but the size of the fuel injection module will keep it off top-handle saws that need the most compact profile.

For much of my tree cutting work I rely on battery-powered saws, and I have gotten a lot of work done with them since 2011 when I first started using Stihl AP battery series saws. Now this professional line has grown to seven saw models, including three rear-handle, one top-handle, two pole saws, and a combination-tool saw head attachment.

We showed the top-handle MSA 161T in brief when it premiered at the GIE show in 2018, but in case you missed it, this is Stihl’s first top-handle battery saw in the US. Configured for working aloft in a tree or bucket, this saw is designed for compact maneuverability. And like the AP battery saws that preceded it, an important factor in its cutting efficiency comes from its thin-kerf bar and 1/4″ pitch chain which removes less wood in a cut than any competitor’s saw. Doing less work to cut through the wood equates to faster cutting speed and longer battery runtime.

The newest saw in the Stihl AP battery series is their most powerful yet, and the first model fitted with a 16” bar. To go along with the longer bar, the MSA 220 runs 3/8 low-profile pitch chain, which is a size larger than the 1/4″ pitch of Stihl’s other battery saws. Stihl doesn’t publish the output power of their battery-powered saws, but the MSA 220 is claimed to be 15 percent more powerful than the MSA 200, which was claimed to be 30 faster cutting than the original MSA 160, so you do the math…if you like multi-variable equations. I’ve always appreciated the performance of my MSA 160, and my MSA 200 has a noticeably more power in bigger wood, so I’m sure the mightier MSA 220 will be sure to put a smile on the face of the average battery chain saw user or aficionado alike.

Two other notable additions to Stihl’s professional AP battery tool series include the brand’s strongest handheld blower, and a new powerhead for the brand’s “KombiSystem” attachments. The BGA 200 blower features an adjustable length blower tube, a cable plug for a backpack- or belt-carried battery pack to keep the weight down, and a unique swivel hook that lets the blower hang from the user’s belt for one-handed use with less strain. The KMA 130 R 36-volt powerhead runs the same 15+ tool attachments and extensions as the gas-powered KombiSystem powerheads, but with less noise and fumes. The most interesting new cutting attachment of the system shears vegetation along the ground with reciprocating blades that work like the scissoring action of a hedge trimmer. This method of cutting offers more control than a spinning blade or string, especially when working against the edge of a sidewalk or other hard surface.

One other notable battery-powered cutting tool from Stihl is the diminutive 10.6-volt GTA 26 handheld pruner. This tiny tool has a 4” bar, like a mini chain saw, but it cannot be officially be called a saw since it’s designed to be used with one hand. And as we all know…in unison, class…“chain saws can never be used with just one hand”. 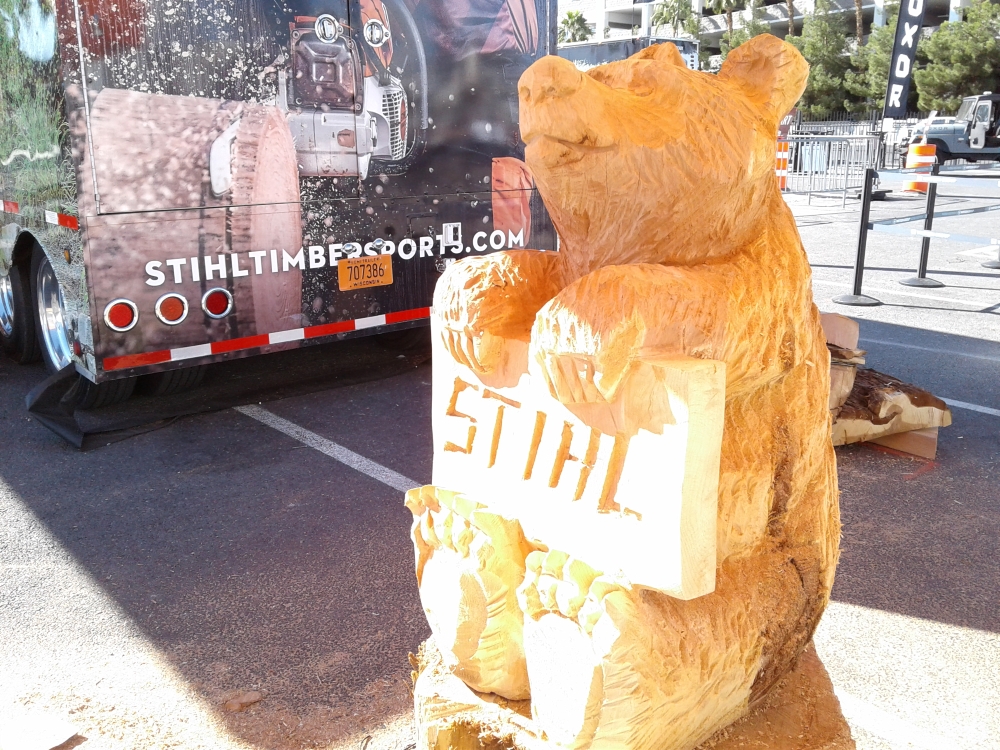 And of all things to find at the 2020 World of Concrete Show, a wooden bear in Stihl’s outdoor booth, crafted by chain-saw carver Griffon Ramsey who gave us carving lessons a few years ago at a Stihl event.