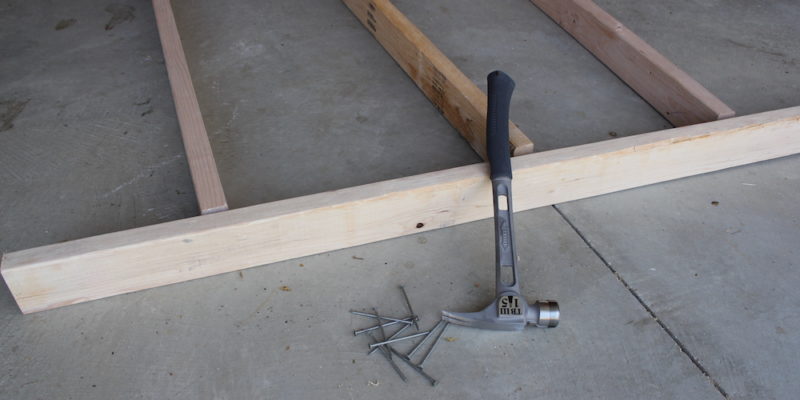 Even though a lot of framing work is done with pneumatic nailers, there’s still a lot of hand work that needs to get done. Like finishing off the nails that the nail gun doesn’t fully sink, or knocking studs into alignment. There are also a lot of framers who just prefer to kick it old-school, by swingin’ that hammer. And since some of those old-school framers are, well, old, swingin’ that hammer can have some painful repercussions. Carpal tunnel, tendonitis and tennis elbow are a few of the unpleasant consequences of pounding nails in all day. Research has shown that many of those ill effects can be reduced or eliminated by switching to a hammer made of titanium. The folks at Stiletto have been cranking out titanium hammers for many years, and not long ago released an updated version of their popular TiBone hammer. Join us for an impactful look at the Stiletto TiBone 3 Framing Hammer.

The TiBone line of hammers features hammers with replaceable faces, and they’re available with either a smooth or milled face. Unfortunately, the previous version had some issues with the face coming loose or rotating during use. The hammer also had a magnetic nail set, which is a great feature. Unfortunately, the magnet didn’t always keep the nail in position until it was set, making it somewhat less useful, and somewhat more curse-inducing.

The engineers at Stiletto got to work on both of these problems, and it seems as though they nailed it. The Stiletto TiBone 3 features a redesigned anti-rotational face, and a stronger magnetic nail holder. Here’s the list of features from Stiletto:

Lose The Shock, Keep The Awe

For those of you who aren’t metallurgists, titanium has definite advantages over steel when it comes to making a hammer. Titanium is 45% lighter than steel, but provides the same strength and striking force. This means the 15 oz. Stiletto TiBone 3 framing hammer has roughly the same punch as a 28 oz. steel hammer, while requiring a lot less effort to swing.

Another big advantage to titanium is that, per Stiletto, titanium hammers produce 10 times less recoil vibration than steel hammers. That’s a lot less shock getting transmitted through your muscles, irritating your nerves in the process. In addition to reducing the negative effects of nailing on your body, the lighter weight also helps reduce fatigue in your arm at the end of your workday.

Getting Our Claws On The Stiletto TiBone 3

Our Stiletto TiBone 3 came well packaged in a sturdy cardboard box, keeping it nice and pretty until I decided to liberate it and start smacking stuff with it. Once I did, it wasn’t so shiny and pretty for long. It started looking like I was using it as a…hammer.

The improved magnetic nailset on the Stiletto TiBone 3 works very well, keeping a tight grip on the nail until it meets its target. There is a slight learning curve when using the nailset feature, if you’re not used to having one. Finding the right arc of the hammer swing to get the nail started straight, and right where you want it, might take a few practice swings.

This is especially true if the handle length on the Stiletto TiBone 3 is different than your previous hammer of choice. Once you get used to it, though, it can be handy for starting nails in awkward positions, or when you need your support hand free to hold materials together.

The grip material is comfortable, and “grippy” without being sticky feeling. It seems to be very well bonded to the titanium shaft, and according to Stiletto, “will not peel or crack.”

A feature I really like is the side nail puller. Its triangular design provides a good grip on the offending nail head, and the long handle provides an amazing amount of leverage. The long straight claw is no slouch, either, both for pulling nails, and for separating studs or snapping the bands off a fresh stack of lumber. It also turns the Stiletto TiBone 3 into a handy demo tool.

Tired Of Hearing “I Don’t Like Your Face!”? The Stiletto TiBone 3 To The Rescue!

In the framing carpentry universe, there are two distinct camps when it comes to the hammer’s face: Smooth face vs. milled face. Either style will bury a sinker equally well, and each has its benefits and disadvantages. A smooth face can be used for trim work when needed, without leaving the surface looking like the local roads after a Pennsylvania winter. A milled face can make toenailing easier, and can help compensate for the occasional less-than-perfect nail strike.

There’s room to rejoice for both camps. The Stiletto TiBone 3 is available in both the smooth-faced version we received, the Stiletto TB3SC, and a milled-face version, the Stiletto TB3MC. Wanna swing both ways? Buy the version you use the most, and buy the replacement face of the opposite style. Now you can perform a facectomy whenever you get the urge.

The Stiletto TiBone 3 Tears It Down And Builds It Up

Over the past month or so, I’ve put the Stiletto TiBone 3 to work on a number of projects. For its maiden voyage, it tasted some solid wood when I used it to demo some old, very sturdy basement partition walls. I used the hammer to whack sections of the full 2” thick horizontal wall material several times to loosen it from the studs, then pried it off with the claw.

The Stiletto TiBone 3 also pulled LOTS of big 20D nails on that project, with both the claw and the side puller. Both worked very nicely, but I was particularly partial to extracting nails using the side nail puller. The handle provides amazing leverage, and I was able to get most nails out with one pull.

In a more constructive vein, I put the Stiletto TiBone 3 to work on a small entryway addition. Framing up the stud walls went quickly, once I got the feel for the hammer’s size and balance. Despite its relatively large size, I had no problem maneuvering it in to nail up several joist hangers.

Getting Hammered With The Stiletto TiBone 3 Framing Hammer

I’ve had my old Estwing 20 oz. framing hammer for over 40 years. I really like that old low-tech hammer, and I’ve buried a LOT of sinkers with it. Over the last several years, though, I’ve noticed that when I use it, even for smaller projects, I almost always end up with pain in my wrist, forearm and elbow. Yep, getting’ old sucks.

My old Estwing weighs in at 1 lb. 15.4 oz. The Stiletto TiBone 3 framing hammer weighs 1 lb. 13.7 oz. Not a lot of difference in weight, but once I got used to the grip, and the length of the handle, I found it consistently took fewer whacks to bury 16D sinkers. There’s also a definite reduction in the amount of shock that gets transmitted into my arm and its various disintegrating joints.

Stiletto redesigned the face on the Stiletto TiBone 3 to lessen the likelihood of having it come loose. It seems to be a successful do-over; the face stayed firmly in place throughout our testing. If it eventually does loosen up, though, or you destroy it by smacking some forbidden object made of hardened steel, you’ll need to re-tighten or replace it.

If you do destroy the face, or want to swap out the smooth face for a rugged milled one, you’re in luck. The replacement faces come with the required wrench; just add a little Loctite, crank it down, let it set up, and get back to work.

Unfortunately, the wrench doesn’t come with the hammer when you buy it. Since this is not a low-budget hammer, it would be helpful if they’d include the 7/32” x 6” Allen wrench needed to perform this facial surgery. Of course, if they DID provide it, it would undoubtedly get lost long before it’s needed. I’m confident MINE would.

Is this omission enough to warrant not buying the Stiletto TiBone 3? Nope; it’s just a bit of a minor annoyance. The wrench isn’t very expensive, and if you have a good set of Allen wrenches, you may even have one already.

If I Had A Hammer…

Like most titanium hammers, the Stiletto TiBone 3 hammer is not for the faint of wallet. At a bit north of $200, this is not a hammer likely to end up in the kitchen junk drawer of the average homeowner, or the DIYer who occasionally knocks together some 2x4s.

For the professional framing carpenter, though, a quality hammer is an essential tool of the trade. As I’ve discovered (somewhat slowly and painfully) over the years, there is truth to the adage “you get what you pay for.” My long-standing practice for any tool I plan to use frequently is to get the best quality I can afford, and I’ve seldom had reason to regret that practice.

The Stiletto TiBone 3 is definitely a high-quality tool, and thanks to its replaceable face, one that should last a lifetime. It’s not cheap, but if spending a couple of hundred bucks can save you from the pain and expense of carpal tunnel surgery or other unpleasantness down the road, I’d call it money VERY well spent.

If you’re looking for a high-quality framing hammer that can bury sinkers all day, while saving some wear and tear on your arm, wrist and elbow, find a store that stocks the Stiletto TiBone 3. See how it feels in YOUR hand. If you like what you feel, bite the titanium bullet and make the investment. If you buy the Stiletto TiBone 3 from the Home Depot, you can swing that titanium for 90 days risk-free.