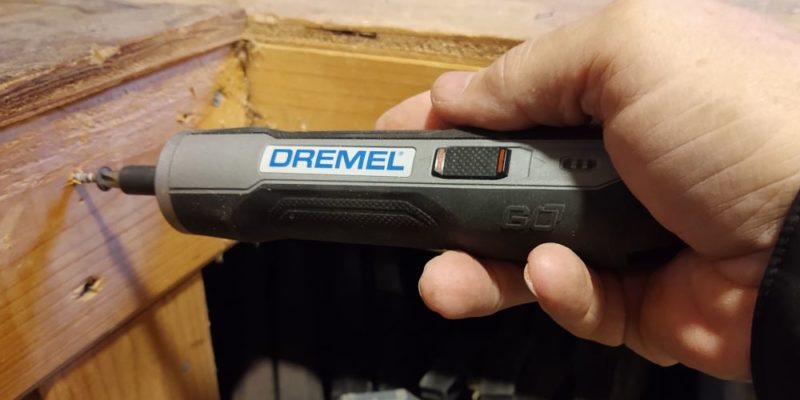 This post is sponsored by The Home Depot. We grew a lot of pie pumpkins this past year. They’re different from the more traditional pumpkins people associate with Halloween. They’re smaller, but denser, a lot more content and not so hollow. My wife has been baking extensively with them all fall, pumpkin muffins, pumpkin bread, pumpkin pie, even pumpkin cookies. Then, for Thanksgiving dessert she made a pumpkin chocolate cheesecake. I had never heard of such a thing, and had no idea how badly I needed it until I tried it. It’s pretty much the same story with the new Dremel Go, a battery powered screw driver that I had never heard of, but now that I’ve used it, I need it.

This little device promises to replace the 4 way screwdriver we keep in the utility drawer, the one that gets the bulk of the work around the house. Though slightly bulkier than a standard screwdriver, the Dremel Go is still pretty svelte, especially considering how powerful this thing is. This is the key to the success of this tool, it easily fits where impact drivers or drills struggle to go.

The Zen of Dremel Go

At the heart of the Dremel Go is a 4v rechargeable Lithium battery that powers the unit. Recharging takes place with the included USB cord and 110v wall charger, though it can be recharged in any USB port. There is am LED light to indicate the battery charge level. For such a small device it generates a handful of adjustable torque, six settings in fact, guaranteeing you will find the right setting for your particular application.

There is a 3 position switch, forward, reverse and the center position, which locks the head and allows the Go to be used as a manual screwdriver. More on that later. Engagement is achieved by pushing the screwdriver against the item being driven and then turns at 360 RPM, which is surprisingly fast. The Dremel Go utilizes a ¼’ drive for the bit and includes 7 of the most popular size and drive types. Additionally, any ¼” drive bit will fit into the driver. Here are the specs from Dremel:

Out and About With the Dremel Go

My work bench out in the shop is a mess of various chargers for the assorted battery powered tools that have accumulated over the years. All of them are slotted to accept a screw head for mounting purposes, so I thought that would be an interesting application for the Dremel Go. I grabbed a scrap piece of 1×8 I had kicking around and an assortment of screws from the catch all bin where orphan fasteners end up. I measured up the numerous chargers and the mounting points and laid it out on the board. Then I sorted through the disparate screw assortment and turned the Dremel Go loose on them.

I started with the lowest torque setting and the driver stalled out pretty quickly. I dialed up the torque to 2 and got deeper, but not the desired depth. Once I hit 3 on the torque setting the driver took the screw right about flush. The rubberized grip was comfortable in my hand and provided a firm controlled grip. The reverse feature is handy and allows for easy extraction of fasteners. If you are looking for a precise depth as I was in this application it is best to get close to the depth you want under power, then place the switch in the center position to lock the head and make the final adjustment manually.

Let’s Take This Outside

I wanted to try the Dremel Go in a variety of applications, and I had a few odds and ends type chores out near the sheep barn. I needed to hang a net near the water tank to scoop debris out. I drove a screw in to the desired depth quite easily. I then had to drive a few screws into a plywood panel on the back of an auxiliary shelter we had build for the ram. The panel was to close up the back to prevent wind and snow from entering the shed. One of the really nice features of this tool was the ability to extend my finger to secure the screw to the bit and the work surface with the hand I was holding the screwdriver to allow for accurate and easy placement. Try that with a drill/driver.

One improvement I would like to see on this tool is a locking collar for the bit. There is a magnet that secures the bit, and it works well enough, I never lost a bit, but there were times when the bit would lodge in a Phillips screw head and pull out of the driver. It also prevents you from using the driver as a drill, as the bit lodges in whatever you are drilling and has to be manually pulled out. A minor thing, but the driver certainly generates sufficient torque for drilling, so this would improve the overall utility of the tool.

Back Inside with the Dremel Go

I had been procrastinating completing a job in my wife’s sewing area for quite some time. It was a small task, just mounting a plant hanger for her. The trouble though is that it’s a bit of a pain, the way the hanger is constructed precludes the use of my impact driver, but the Dremel Go showed up and I was spared the indignity of manually driving screws. The Go again demonstrated its utility by fitting in the bracket and making short work of the task. The Go is quite light and easy to handle, certainly easier to manipulate than most drills or impact drivers due to its small size and sub 1 pound weight.

The Dremel Go is what I consider to be a niche tool, but it fits its niche well. It doesn’t pretend to be an impact driver or heavy duty drill. However, for most applications where a screwdriver is the right tool, the Dremel Go is a great choice. It fits in where bigger heavier tools can’t, yet generates enough power to accomplish all but the most demanding fastener driving jobs. It fits nicely in our in house tool drawer and has plenty of capacity between recharging to perform multiple tasks. The Dremel Go is available at the Home Depot for a very reasonable $36.