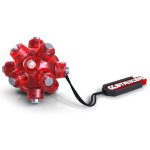 At first glance, the Striker Magnetic LED Light-Mine looks like something out of a Nintendo Super Mario World game. It’s cute, colorful and really itty-bitty – and for some reason, I imagine Mario or Luigi tossing it at one of those evil mushrooms.

But despite appearances, it’s a mighty little light and incredibly handy to have with you when you’re working in dark places.

Slightly smaller than a golf ball, the Striker Magnetic LED Light-Mine contains several super bright lights all around it and 12 strong magnets.  These magnets allow you to stick the light-mine on the metal objects in your space (think a fuse box or an under-counter sink) so that the light emanates from all around it.

Extra handy bonus about the Striker Magnetic LED Light-Mine? If you drop a screw or nail on the ground, you can use the light-mine to both find the dropped item, but the magnet will also pick it up for you. Mamma Mia!

sells at Amazon for $7.49. Super affordable!