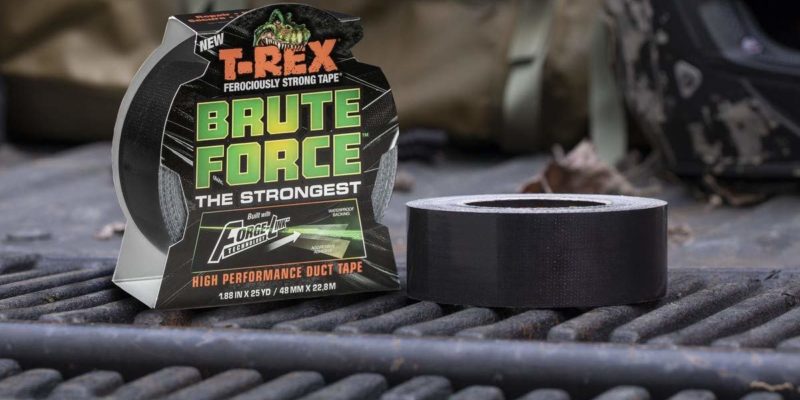 Via my home improvement guru and mentor Red Green I learned early on that Duct Tape was the handyman’s secret weapon. So with that class-A upbringing I learned to use duct tape as not just an adhesive but as a tool. One as versatile as my Leatherman multi-tool. As you might imagine, when I received a box from my editor in the mail containing two rolls of T-Rex Tape (manufactured by Shurtape), a new beefier version of duct tape, my heart fluttered like a tween at a Justin Bieber concert.

Now here’s what I think. I was very impressed. I will start, however, with my one and only complaint. The tensile strength is a double edged sword. Yes, this tape is incredibly strong but it makes it terribly difficult to rip. Other than the fact that I have puny arms and am whining about the difficulty in ripping it, I loved it. I tried T-Rex Tape here and there on several different tasks: including a rip in a tent, dryer vent tear, tarp control, and (for your viewing pleasure) waxing. I went above and beyond the call of duty and will spare you the images.

The only task that did not stand up throughout my testing period was a tent rip, but for that I need to give you the whole story. The tent in question is a portable storage tent that I use as a work tent in my real world life. It’s 40′ x 60′ x 25′ tall and is made of a thick rubber-like material that when ripped is normally welded back together with similar material. I have tried taping the rip in question several times with normal duct tape with success lasting only a few days. The T-Rex Tape lasted for over a week. Not exactly a permanent fix, but nothing short of the welding would be. Other than that, the T-Rex Tape stood up to the challenge and claimed victory.

As to the waxing test, it turns out just about any duct tape will remove hair (who’da thunk it?) I’m hoping that my leg hair will grow back before the busy beach season, or I’ll have to come up with a good excuse. Any suggestions? If you’re interested in more information, check out the T-Rex Tape website, or if you just want to buy it, you can find T-REX Ferociously Strong Duct Tape on Amazon: