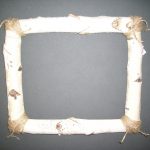 For those of you who like a rustic look in a picture frame, and I do mean rustic, the half round, birch wood frame is the ticket. As a custom picture framer hailing from Central New York, I can tell you that people around here like their wood rough. The grainier and knottier; the better. Bring on the imperfections. And, though I offer over two thousand moulding samples from quality, trusted manufacturers, in every type of wood and style imaginable, sometimes they don’t quite suit that “certain” client. The gruff man. The mountain man. The manliest of men. The man who barks, “Go$#@^!*mit, I wan’t a frame that looks like you just ripped it off a tree!”

Ask and you shall receive. I got to work. My frame shop is surrounded by white birch trees. The branches rot, crack and blow down constantly, due to high winds. I was able to break off one whole branch that was uniformly about 3″ in diameter, which was just what I needed for this particular frame. Otherwise, I could have used two pieces that were close in diameter. (Keep in mind, you need either one section that’s long enough to be cut in two pieces; or two sections that are close in diameter; as these will be halved, lengthwise, giving you the four sides needed for the picture frame.)

First, I rough cut the single branch into two, 20″ sections with a chainsaw. The completed frame needed to be 12.5″ x 15″ so I had to leave enough, additional length to accommodate the mitered, corner cuts and plenty of room for error. (You’ll see what I mean in a just a minute.)

Then I marked the diameter (as close as I could get on an imperfect circle) and ripped the lengths using a table saw. Be careful! I allowed the wood to find its natural “roll spot” or “point of gravity” before marking the diameter. I also finished the cut using a push-stick as I got closer to the blade. With that said, if you’re not very experienced with a table saw, you may want to think twice before making a cut like this. That left me with four half rounds, all with a nice, flat bottom surface. The problem was, I needed to make a rabbet. If the half rounds are “meaty” and have enough depth, you can try using a router to cut the rabbet right into them; but that’s tough because of the inconsistencies on the rounded side of the birch. It’s also potentially dangerous (bye, bye thumb); so what I opted to do, is build a backer frame that would be attached to the flat side of the half rounds, thereby creating a rabbet.

The backer frame doesn’t have to be anything special, because you ultimately won’t see it. Though, it serves the tri-fold purpose of: A) providing a rabbet to hold in the glass and art, B) giving you the nice, square dimensions you need for the glass and everything to fit properly, and C) providing a strong enough support for screw eyes and wire, a saw-tooth hanger or whichever hanging hardware you choose to use. Installing the hardware into the backer assures the most secure way to hang, because while the half round birch makes a cool looking “face” for the frame, it probably won’t be stable or sturdy enough to support the hanging hardware and ultimately the weight of the glass, art, etc.

For the backer frame, I used 1/2″ x 1″ raw, wood slats cut to 12.5″ x 15″ with a miter saw. I then joined the sides in about fifteen seconds with an underpinner. NOTE: An underpinner, also known as a vee nailer, is a Godsend in the world of custom picture framing. This piece of equipment is righteous! You poor souls probably don’t have one of these in your woodshop, so it’s a right angle clamp, and glue and nails (AND NO SOUP!) for you. I feel your pain.

I began attaching the birch to the backer; one side at a time. This part of the build will be time consuming, because even though the birch has one, flat surface that butts nicely to the backer, the lengths will be twisted and irregular (no way around it; that’s what you get for using tree branches to make a frame). I started by laying one of the half rounds along one side of the backer. I eyed it, mitered the ends and laid it back into place. You’ll have to re-check/re-cut a couple times before the miters on the birch wood “match up” with the miters on the backer frame. Plus, when you are laying the birch down, you need to leave as close to a ¼” overlap toward the inside edges of the backer frame as possible, so the backer is “hidden” under the birch. There is no way it will be a uniform ¼” but get as close as you can. After you’ve got one side where you want it, fasten from the back with wood glue and nails. Once that’s done, repeat the process with the opposite side of the frame. It doesn’t matter whether you choose to fasten the two short sides or the two long sides first, but it helps to have two opposite sides in place so you can more easily fit the last two pieces. Once you have two opposite sides in place, you can fit the last two sides using the same method as described above.

There will definitely be gaps and different elevations where the miters meet. Fear not; it only adds to the charm! If you want, you can use wood putty or filler to blend the seams. Or, in the case of wicked gaps/elevations (which I ended up with), you can wrap the corners with something. I slapped a pretty generous amount of glue around the front and back of the corners and wound twine around and around each corner to cover the gaps; tying it off on the face of the frame in rough knots. Once the glue had dried, I notched the twine out of the inside corners of the rabbet of the backer frame with a utility knife; otherwise, the glass and everything won’t be able to “sit” down into it because the twine blocks the corners. The frame was ready to go. I’m telling you, the finished product was “Daniel Boone” rustic.

When Grizzly Adams saw the finished, birch wood picture frame, he was thrilled. He thanked me; leaving me with a bone-crunching handshake, a clap on the shoulder and a $10 tip. (This on top of a somewhat hefty price tag – for the extra headache, of course). This framing project was creative, kind of fun (once I got my moves down) and made mostly from materials that most people consider junk. One man’s crap truly is another man’s treasure.