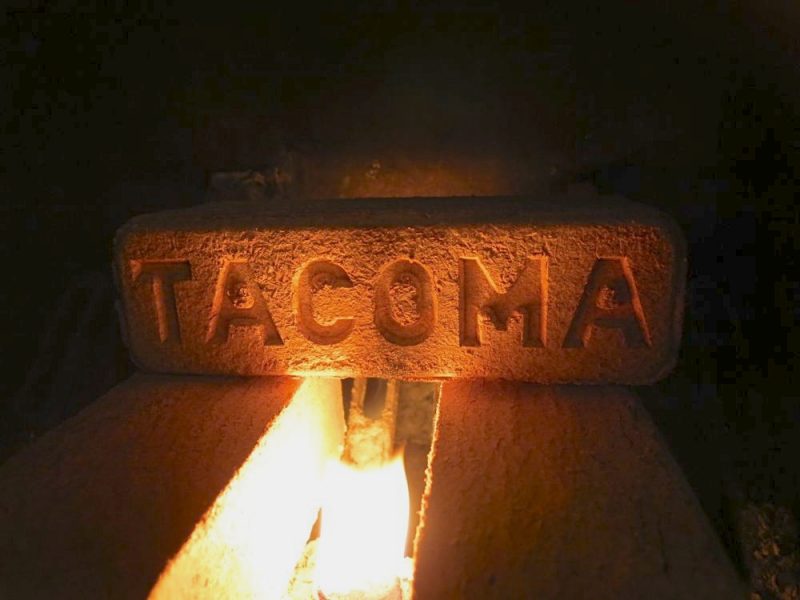 Wood pellet stoves have been an increasingly popular fireplace alternative in recent years. They are highly efficient, and make use of wood pellets that burn more cleanly, with less ash, and with higher heat output than conventional cordwood. But not all of us have wood pellet stoves. For the rest of us, there’s the Tacoma Firelog. We ran into the folks from Tacoma Firelogs at a recent National Hardware Show and they sent us some of their product for a test drive. I know what you’re thinking. San Diego isn’t exactly known for being an ideal test location for products that warm you up.

Contrary to popular belief, it’s not always 70 degrees in San Diego. We just happen to operate at a different temperature-based-facebook-posting-threshold. Allow me to explain. There is an interesting phenomena, (one of many), that occurs on Facebook. Once weather reaches a certain extreme threshold in a given area, a percentage of the Facebook population is compelled to do a status update. It’s a bit like CNN iReporters, only even more boring. Case in point, it was particularly cold here in San Diego recently. Yup, it was early morning and my car’s temperate gauge indicated a downright icy 33 degrees. For San Diegan’s this is equivalent to the sky falling, and definitely worthy of a status update.

Now, before you start sending in the hate mail with lines like, “33 degrees is like a tropical vacation where I live” and “It hits 33 degrees here too – in the middle of summer!” and “The only thing worse than people who live in paradise is people who complain about living in paradise”, we get it. Just keep in mind that here in San Diego, small children (and some adults) literally run to their windows and stare out in wonder on the rare occasions it rains. Children at my daughter’s school were recently terrified to walk down a hall with skylights for fear the rain might somehow injure them if it broke through the ceiling. In other words, we have no weather. A San Diego cold snap was as good an excuse as I was likely to get to lounge by the fireplace.

We had previously tested out Envirologs which are made from compressing wax-laden, recycled produce boxes. They were super easy to light (think giant candle), but they created quite a bit of ash, and we were a little concerned about how much of that waxy-goodness was depositing itself in our chimney.

Lighting Tacoma Firelogs effectively isn’t completely intuitive, and while we could have managed winging it, we actually had to hop online to see their “official” method of lighting. We think including lighting instructions on the box would be a worthwhile addition to the packaging. Each box contains two fire starters; gumdrop-shaped balls of wood shavings that ignite readily. The inclusion of two fire starters means you can get two easy-to-light fires out of one box if you’re so inclined. To light your firelogs, you place two firelogs parallel to each other with one firestarter ball (rounded side down) in between them, with a touch of breathing room. You then place two more firelogs perpendicular to the first, with a similar gap in between them. This seemingly Jenga-inspired technique creates a little chimney in the middle which helps spread fire from the starter to all four logs.

Tacoma Firelogs are made with no binders or wax; they’re basically highly compressed planer shavings, sawdust, hog fuel and other wood left over from lumber production. For more details on how they are made, check out this video:

According to Tacoma Firelogs:

The firelogs weigh only three pounds each, but produce over 8,000 btu’s per pound. . . The low moisture content in each log allows energy to be released as heat, not as extra carbon from wax binders, or dangerous creosote buildup from cordwood. 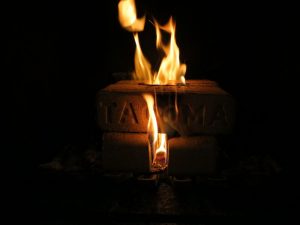 We found the heat put off by four Tacoma Firelogs to be powerful enough to rapidly induce a multi-hour nap. Testing firelogs is hard, thankless work people! The manufacturer states, “Tacoma Firelogs will burn for 1 to 2 hours in an open fireplace or fire pit. In a properly vented woodstove, the firelogs can burn for 4 to 6 hours.” In our rigorous testing, we found our stack of four nap-inducing logs burned well over two hours in a conventional fireplace.

With normal cordwood, we’re typically left with large chunks of charcoal and substantial amounts of ash after a fire. Tacoma Firelogs burned completely, with no unburnt chunks and minimal ash to show for it all. Unless the manufacturer starts sawing down trees just to grind them up for firelogs (not likely), these are actually a very green product as well. Instead of you or someone else cutting down a tree to burn, you’re essentially using a byproduct that in prior times simply went to waste. Very cool, or hot in this case. Tree-huggers rejoice!

Each log measures approximately 2 ¾”x3 ¼”x9 ½”. They’re small enough to fit in most fire boxes or even a chiminea. The retail packaged firelogs weigh in at about twenty-four pounds, making a hernia unlikely. Each box is also shrink-wrapped, keeping them dry and minimizing dust. When you do open the box up, be aware that some loose sawdust will be present from transport. That’s not an issue outside, but something to be aware of if you’re opening the package over your prized bearskin rug. 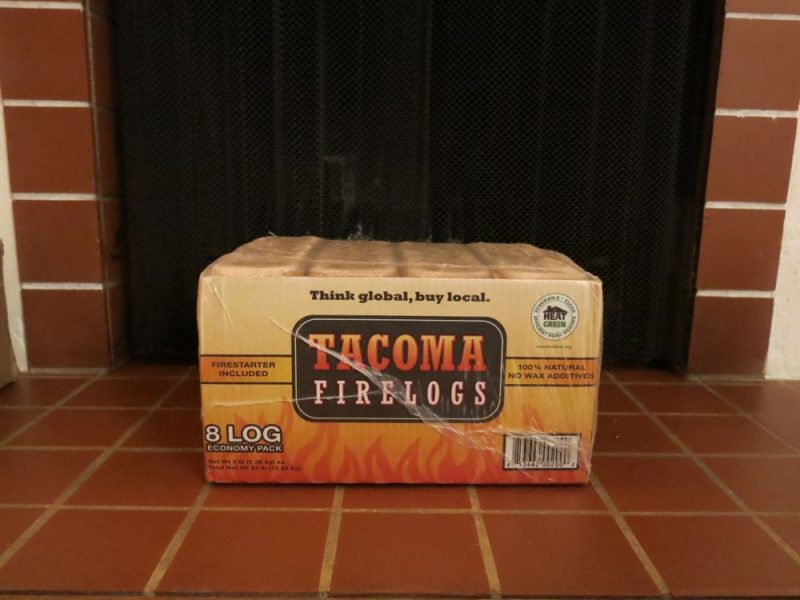 The only significant downside we see to Tacoma Firelogs is limited availability. Right now, they’re exclusively found in the Northwest. Primarily Washington and Oregon. They are looking to expand into Idaho by the end of the 2013 season and it’s rumored a few stores are carrying them in Northern California. Who knows, if things go well for them, maybe you’ll start seeing product nationwide. You can find a dealer list online, and each box of 8 Firelogs (and two starters) retails for a very reasonable $6.99. We’ve seen “Duraflame”-style packages of logs easily costing four times as much. Happy napping!