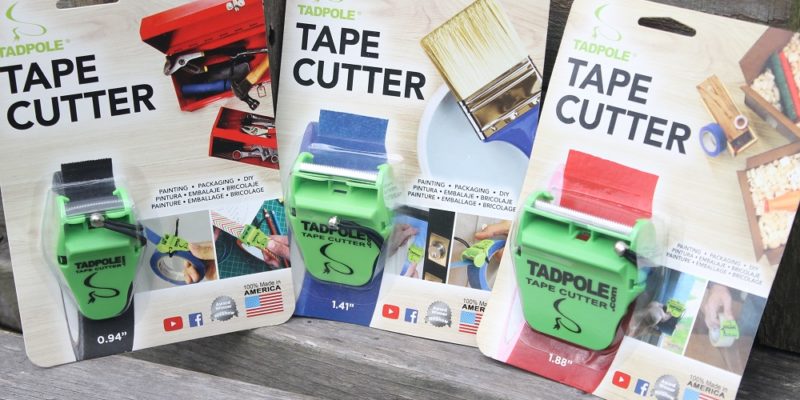 Tape dispensers are usually things you put your tape into. While technically a cutter and not a “dispenser”, these little green gadgets strap on to almost any roll of tape, giving you nice, straight cuts every time, without the bulk of a traditional dispenser or tape gun. At first glance, they were just another gimmicky novelty. But once I started using them, they won me over. If you use a lot of tape in your shop, on the job or around the house, you’ll probably find the Tadpole tape cutter as handy as I have.

When I tape off a project in prep for a paint job, I usually need square-ish cuts at the ends of my strips. But it’s difficult to get reliably straight tears by hand. So I end up digging out a pair of scissors and spending way more time on what should take less than a second.

It’s not that I’m bad at it (well, it’s not ONLY that I’m bad at it); it’s just the nature of tape. It defiantly rips at every angle but 90°, the acuteness and jaggedness of which is directly proportional to my own desire for a nice straight, square tear. In other words, when I do get a decent tear it’s a stroke of pure luck.

Tadpole Tape Cutter – Easy To Use, And Reuse

Each Tadpole tape cutter has an elastic cord that wraps around the inside of the tape roll to hold it in place. Grab the end of the cord and pull it into the slot on the side. Removing the cutter is just as easy. And not only are they inexpensive, but you can reuse them roll after roll. So you get a lot of value for the price.

Tadpole tape cutters work with just about any kind of tape: Painter’s tape, masking tape, gaffer’s tape, duct tape, aluminum foil tape, packing tape, and even electrical tape. With electrical tape, you’ll still get some of the stretching you’re used to. But at least you won’t have that really narrow, curled up end.

The first few times I used a Tadpole tape cutter, it felt awkward. That’s because I was doing it wrong; I was holding the sides of the Tadpole while pulling tape from the roll. The correct way (which works much, much better!) is to hold the roll and pull the tape exactly as you would without a Tadpole attached.

You only need to interact with the Tadpole when you’re ready to cut. Because these little amphibians tend to shift around a little, you’ll rarely get perfect 90° cuts. But they will be within a few degrees, and straight. And they’ll almost always be superior to hand torn edges.

American Made – Yet Fairly Priced

Despite the name, they are not in a larval state. That said, there’s no guarantee they won’t grow legs and hop away when your friends or co-workers see them in action. Especially if they get to try one out for themselves. So consider buying a few extras. And so you don’t have to ask: yes, they will work just fine with Frog Tape.

You can purchase Tadpole tape cutters for just over $5 each: