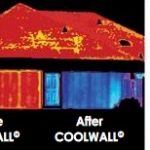 When I think about the energy efficiency of my home, I instantly get that picture in my head of a house viewed through infrared goggles, just like that sketchy alien in the movie Predator. The windows, roof and walls are bright orange/red, and I can literally feel the electric meter whirring madly trying to keep up. It’s like my home is bleeding pennies by the second. Ouch. We all know energy loss due to insufficient insulation in our home could be contributing to our high energy bills, but most of us probably don’t realize that the sun beating down on our home adds significantly to the problem. You end up with hot air coming in as your cool air is leached out. Enter the Tex-Cote CoolWall Coating System. According to the data, if my house was a tank covered in this stuff, it would be virtually invisible. It uses heat reflective military technology to bounce the sun’s rays back away from the house. According to the Department of Energy, CoolWall can lower the temperature of the outside walls of your home by up to 40 degrees, and save you up to 21.9% of your cooling costs! With those kinds of numbers, the CoolWall sounds very cool indeed! If only Arnold had sprayed himself and his elite team down with CoolWall, then they could have taken out that pesky Predator alien in about 5 minutes. It would have made for a short movie, but great product placement for CoolWall. Tex-Cote CoolWall is military tank approved, and they are a member of the US Green Building Council, who else can say that!? You can contact Tex-Cote for a CoolWall Dealer in your area.