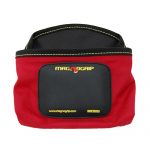 I’ll be the first to admit it – I’m not much of a neat freak. My wife would use other words, but that’s not really all that important. The other day, however, I found myself in the tool aisle of my local ‘candy’ store partly shaking my head and rolling my eyes, yet also partly in fact kind of lusting for the MagnoGrip Nail Pouch. In case you can’t tell by the picture, or the name, it is a nail pouch – with magnets. At first look, I thought to myself, “Who in the world would waste money on a nail pouch that holds your nails for you?” I mean really, how long would it take you to do anything if you had to organize your nails first? However, I kept looking at it and in the back of my mind I found myself saying, “Uh, yeah, that could be pretty handy!” Who knew I could be so fickle?

In case you’re interested in being as anal-retentive as you can be, there is good news. The MagnoGrip fits with most tool belts. It’s also fairly light weight (about 0.5 lbs.) for doing what it’s supposed to do, and is magnetized both inside the pouch and outside. This means that not only can you organize your nails in pretty little rows, but you can also arrange your small hand tools on the outside. Realistically, it definitely would keep nails and screws from falling out if the pouch is turned over or tilted too much. As one reviewer said “…I no long[er]…put my nails in my mouth anymore.” What a brilliant observation – yes, perhaps a nail pouch would be better suited for nail storage than the most accessible point of entry to your lungs and stomach!

Poor jokes aside, the MagnoGrip nail pouch is made of ballistic polyester and reasonably priced at just under $13. Check out the MagnoGrip website for more information about the nail pouch and other MagnoGrip accessories. 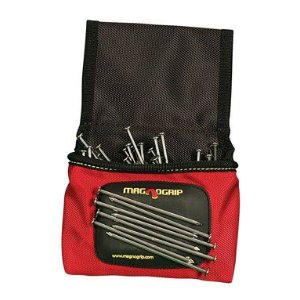