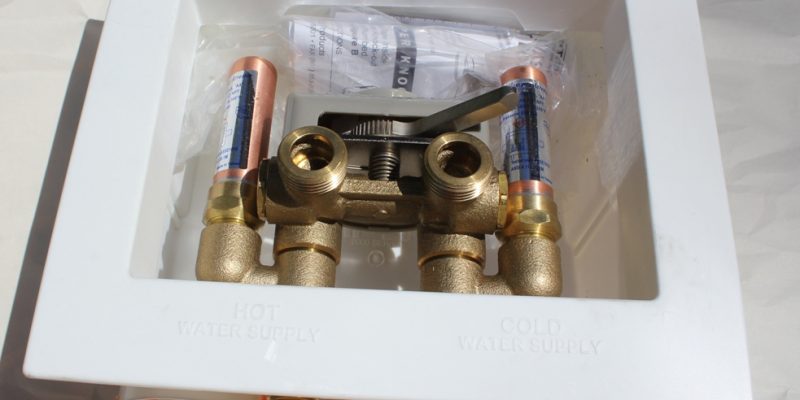 When was the last time you shut off the water supply to your washing machine? Mmmhmmm, I thought so. Shutting off the water to your washing machine is one of those things you SHOULD always do, but don’t, like flossing, or going to church even if it’s NOT Easter or Christmas, or eating more greens and grains and fewer Whoppers and Frappuccinos. We have a product that can make doing the right thing with your laundry valves a no-brainer; the TimeOut Automatic Shut Off Valve.

If you’re like the majority of the laundering population, (myself included), the water supply never gets shut off, unless one of the supply hoses springs a leak. If you’re VERY lucky, you’ll notice that leak shortly after it starts, get the water shut off, and have only a minor mess to clean up. If you’re NOT so lucky, it will go unnoticed for hours or even a couple of days, and in the worst-case scenario, where the hose actually ruptures, you will end up with a whopper of a mess. The consensus seems to be that, with normal city water pressure of between 40-70 psi, a burst hose can put out around 300-500 gallons of water per hour. Since water weighs about 8 1/3 pounds per gallon, that could be over two tons of water an hour, every hour, until you discover it, shout some words from your special homeowner’s vocabulary, and shut it off.

I know we should shut off the water every time, but we have old-school round pain-in-the-butt shutoffs instead of ¼ turn ball valves or the easy flip lever. Besides, my wife does the laundry 99% of the time, and being 5’1” tall, has a hard time reaching them (and pretty much everything else). I do use stainless-steel braided supply hoses, which are far better than the standard rubber hoses, but even they can fail eventually.

The Keeney Manufacturing Co. recently provided us with a couple of their TimeOut Automatic Shut Off Valves to evaluate. The folks at Keeney recognized that we are creatures of bad habit, and came up with a product to save us from the consequences (of THIS bad habit, anyhow; for the remainder, you’ll need to seek help elsewhere). According to their website, nearly 80% of washing machine hoses fail before 10 years, and the average cost of damage due to a burst hose is $6,000.

The TimeOut is an automatic timer valve that can be preset to shut off the water flow to your washing machine hoses, reducing pressure on them and preventing flooding due to burst hoses. TimeOut is perfect for new installations and can be retrofitted to fit existing pipe configurations. The valve is manually turned on by simply sliding a lever, and shuts off after the preset timer times out. The valve can be set to stay on for between 1—2 ½ hours. The valve body is very beefy, solid brass, and the unit has been tested to last over 10,000 wash cycles; that’s a lotta dirty duds!

I installed the first valve in the bathroom at our recently-acquired farm house. This is an old house, which has been updated over the years, apparently by a variety of remuddlers whose skills range from pretty good to dangerously non-existent. If the existing washer setup had been standard, the installation would have been a piece of cake, as shown in Keeney’s easy installation video below, which shows how to retrofit a single-lever shut off to a TimeOut. That would have been WAY too simple, though, and wouldn’t have allowed me to employ my phenomenal plumbing skills.

Whoever set up the plumbing for the washing machine did so by installing two fittings of the type normally used for a bathtub shower head behind the wall, and then screwing two hose shutoff valves into them. This made step one a little more complicated, in that I had to rip out a section of drywall and perform a little plumbing magic. It was just as well I did, though, as it was then I discovered that the same genius that did the plumbing had also connected the 4” dryer vent pipe (which was a cheapo, ripped vinyl one, duct-taped to the back of the dryer, which is unsafe and doesn’t meet code pretty much anywhere) to a smaller, 3” pipe inside the wall. The pipe then vented the hot, damp dryer lint up through the wall and into the attic, where it would have just settled all over the attic floor, if the pipe hadn’t been so packed full of lint that nothing even MADE it into the attic any more. On the bright side, maybe if that whole sketchy mess had overheated and burst into flames, the washer hoses would have burst at the same time and the spraying water would have put it out—alas, now we’ll never know…

At any rate, once my plumbing update was complete, I attached the TimeOut with no further difficulty, hooked up the washer hoses, and flipped the lever about half-way over to turn on the water. The lever opened the valves to both hoses (hot and cold), and about an hour later, Shazam! The water was off, through no doing of MINE. I ran it through about a dozen cycles, and works as advertised. (I still have to replace the drywall, get braided stainless-steel hoses, and up-size and re-route the vent so it DOESN’T vent into the attic—it’s next up on the project list. No, really!)

This will be an excellent setup, once we replace the stacked washer/dryer unit with a side-by-side set, so my horizontally-challenged wife will be able to reach the shutoff lever. Since we aren’t there all the time, it’s a relief not having to worry about a burst washer hose flooding the place. The washer is on the second floor, as is the case in many homes now, so a burst hose could have caused a LOT of damage.

Where to Buy the TimeOut Automatic Shut Off Valve

The TimeOut automatic shut off valve is available directly from Keeney,  in various configurations (with water arrestors, for example, like the one I installed). You can also find them on Amazon

. The basic valve, utilized for retrofit installations onto existing single lever washing machine valves, is $58. It will fit Symmons, Watts, Oatey and other similar single handle valves. Get one, and save yourself potentially having to pay out thousands in repairs that you COULD have been spending on greens and grains!