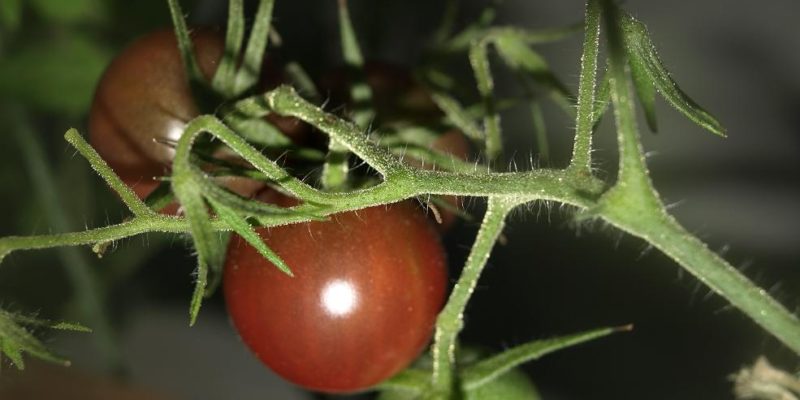 We all want tasty tomatoes, not the flavorless imitations sold in most stores. But I recently saw a garden meme that went something like this: “homegrown tomatoes: spending three months of your life to save $3.” It’s nowhere near accurate. First, plants that produce several tomatoes have probably earned their keep. Second, watering a handful of plants takes less than five minutes on daily basis and that’s only if it hasn’t rained. Finally, the flavorless tomatoes I could get at my grocery store don’t compare to the ones I can grow myself. So read on for our handy tomato growing tips if you too feel that growing tomatoes is not wasting your time.

We all know that fruit size is an important factor when you go to select a tomato variety. Tomatoes range from not quite bite-sized to large slicing tomatoes. The question is: do you want cherry tomatoes for a salad and garden grazing or huge tomatoes that can be more easily sliced for sandwiches? Or maybe something in between that makes a good sauce? Or maybe you need cherry varieties so they won’t overwhelm your hanging basket set up. You have to consider what purpose the tomatoes will serve as well as what your current garden set up looks like in order for you to pick the right variety.

Color is often another factor gardeners often consider since it is often linked with flavor. Tomatoes come in red, yellow, pink, orange, green, and white as well as dark reds and blues that almost look purple. The blue varieties are supposed to be high in antioxidants and other good things but they’re probably also great as a conversation piece in the yard. My family particularly likes the dark red, so-called “black” tomatoes because they seem to have the best overall taste. The trouble is most of them don’t like the hot, hot, hot weather that’s indigenous to where we live.

This year I had Black Cherry and Early Girl. The black cherries have produced a decent amount of fruit but they’re not winners in that category. They also have a great flavor, as is typical of black varieties. Although my grandfather has grown Early Girl for years and highly recommends them, I haven’t been all that impressed. The ones I planted ripened about the same time as the Black Cherries, rather than ahead of schedule. Mine also never got very large.

In the past, I’ve grown a number of different varieties. These include the prolific but unnamed kind that my grandmother always germinates from grocery store fruit. My favorite thus far is Risentraube because it’s prolific and can take the heat. The flavor of Black from Tula is good. But the fruits are known to crack easily at the best of times. They also don’t produce much fruit when the weather starts getting warm.  A couple of years ago, I grew Roma tomatoes. These turned out to be pretty prolific and are especially nice if you plan on oven-drying them later. I’ve also tried Cherokee Purple as well. It only got produced one fruit the entire growing season. I couldn’t comment on the flavor since it was stolen, either by my neighbors or by squirrels.

Since their fruit is mostly made up of liquid, tomatoes need a good deal of water. If you are growing them in containers, the bigger the container the better. Most need as much room as possible to space out. A five gallon bucket is probably as small as you want to go if you’re trying to get fruit that’s large enough to make a tomato sandwich on its own. Tomato varieties that don’t get very large and have small fruits can be successfully grown in hanging baskets. Many urban gardener blogs have proved this fact. However, the heavier the tomatoes dangling over your patio, the more likely they will come tumbling off your plant and end up squashed on the ground

Tomatoes also need lots of nutrients. You can use recycled potting soil if you want but only do so if it is disease free and has been refurbished with compost, fertilizer, and other amendments. Using additional fertilizer once a month is a good rule of thumb. But be sure to follow the package directions on the fertilizer you’re using, since some need to be reapplied more or less frequently than others. If you’re worrying about overdoing it, granular fertilizers are the way to go since they self-release according to the needs of your plants. I’ve been using Osmocote pellets but found a new organic fertilizer that’s made from recycled food wastes. It seems to be doing wonders for the zinnias, if nothing else.

If you are buying tomato seedlings or transplanting homegrown ones, it’s a good idea to strip off the bottom pair of leaves. Then bury the plant at an angle so that the nodules where the leaves were are now fully covered by dirt. This encourages the tomatoes to develop a stronger root system. I haven’t found bugs or diseases to be a problem with the tomatoes but the leaves can cause mild to severe contact dermatitis in some people. Either wear gloves or wash your hands after dealing with these plants. Gardeners also need to keep in mind that tomatoes are picky about the temperatures when it comes to producing fruit. If it’s too hot or too cold, you’re truly out of luck until the heat kicks in or the weather cools off.

If we missed any of your favorite tomato growing tips, please share them in the comments below. As always, happy gardening!