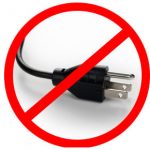 In news that is shocking many in DIY, remodeling and construction, a coalition of the major power tool manufacturers has announced the end of corded tool technology. With major improvements in battery technology, it’s something many of us have seen coming, but most thought the change was still years, if not decades away. However, not everyone is surprised by the news.

One unnamed industry observer took the announcement in stride: “Tool companies have been making the transition to cordless for decades now. Anyone that didn’t see this final stage of cutting the cord altogether is probably still using handsaws. Wake up and smell the Lithium!”

Another power tool exec added, “If any of our customers have a problem with this transition, I would ask them to send us an email, rather than chiseling the message into a stone tablet like they usually do. Welcome to the 21st century [Female Parent] [Expletive]er’s!” It seems tool companies have little sympathy for power cord technology Troglodytes.

One noted hold-out in the transition to exclusively using battery technology is Fein. “Wir wissen daß Unser MultiMaster der Beste ist, und Wir behalten den Kabel.” Or, loosely translated, “We know our MultiMaster is the best, and we’re keeping the cord.” In the new exclusively cordless crowd, will this make Fein even more sought out, or will they just be left behind, tearfully clutching their antiquated power cords and convictions? Only time will tell.

The announcement was made by a panel of tool company executives at the annual media event held by the International Tool Manufacturers Association, or ITMA. ITMA put out some hints ahead of the annual event forecasting a major industry announcement. It was standing room only, despite the cavernous venue for the event. The panel of executives answered a barrage of questions after the announcement.

One editor of a major home improvement publication asked how the battery-only announcement applied to heavy-duty tools like jack-hammers. A panelist replied, “We’ve been working on heavy duty 60 Volt Max high capacity batteries for some time now. As long as the user doesn’t mind pausing every 15 minutes to swap batteries, heavy duty work like jack-hammering is no problem. We’ve also received feedback from tradesman focus groups that they hate having to find an outlet for their jack hammers.” The response brought stunned murmurs of disapproval from the crowd.

Many expected a lengthy period of time during the transition to all tools going cordless. Surprisingly, manufacturers have had an agreement in place for years now. Effective today, April 1st, 2011, all newly distributed power tools will only be sold with cordless technology. So, if you’ve got a favorite corded power tool, you may want to head to the store to stock up before they’re all gone!