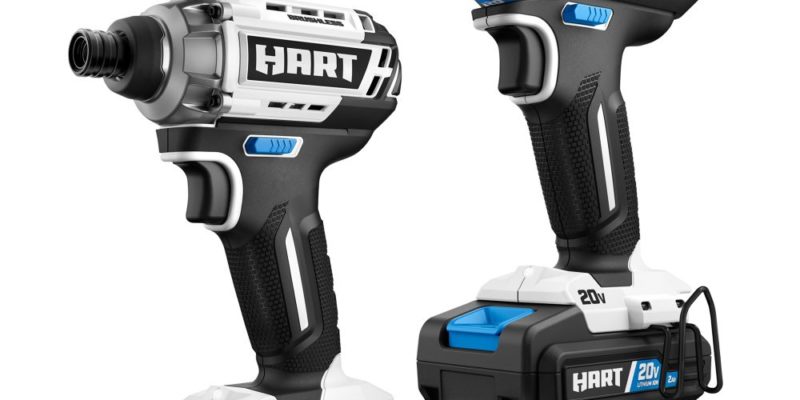 The holidays are upon us here at Home Fixated! We’ve been busy getting ready – trying to figure out ways to mix cookie batter with a cordless drill, buying extra drywall repair supplies in anticipation of the kids putting gouges into the walls with their new toys, and upgrading the breaker to the outdoor electrical outlet. We’re going to need extra capacity for all of the new strings of lights we bought. This year, the holiday illumination strategy is to completely dominate every other house on the block. Anyway, enough about us…let’s talk about tools. In this installment of Tool News Nirvana, we’ll have a look at a new line of cordless tools at Wal-Mart, Makita’s new lawnmower, Metabo’s ninja tools, a power bank from Klein, and a nifty new garage door opener from Chamberlain. Nirvananauts, let’s go!

Wal-Mart recently announced a new partnership with the brand HART, which will see the massive retailer become the sole distributor of this line of tools in North America. Ultimately, the line will be composed of over 60 power tools, 40 outdoor tools, 170 hand tools, over 70 power tool accessories, and a healthy assortment of storage options. The tools themselves will be either 20V or 40V, and will all share the same battery platform for maximum versatility.

The initial salvo, which will start being stocked this month, will be a 20V 4 tool combo kit, a 20V drill & impact driver kit, and a 20V string trimmer/edger & blower kit. The complete line of over 340 items will be available in February 2020. Here at Home Fixated, we think it’s great when people decide to tackle home improvement projects on their own. These HART tools and accessories, with their focus on quality and value, make it much easier to handle almost any project around the house.

Mow Your Lawn With Makita

I should probably clarify that I don’t literally mean “mow your lawn with Makita,” because mowing a lawn with a brand name wouldn’t make any sense. What I’m trying to say is “mow your lawn with Makita’s new 18V lithium-ion lawnmower.” There…is everything clear now? Good! Anyway, this new lawn tool from the Boys (and Girls) In Teal has a host of well-thought-out features, including adaptability for bagging or mulching, a commercial-grade steel deck, a brushless motor, and WET GUARD™ weather-resistant construction.

Let’s say that you have a “side-hustle” as a ninja – just a nice little way to have a secret life, doing ninja-y things. Sneaking around, hiding in smoke clouds, appearing behind unsuspecting people for no apparent reason – those sorts of things. One of your ninja assignments (from your spouse, who is also a ninja) is to build a deck, but only at night. Until now, it would have been difficult to find tools that could as stealthy as you. Luckily though, Metabo HPT recently launched a new line of brushless power tools, all of which will be completely black in color. The initial launch will consist of an 18V Driver Drill and an 18V Impact Driver. Both feature brushless motors, 1.5Ah batteries, and highly-refined ergonomics for user comfort. For the holiday season, each is available at Lowes for $99.

Klein Tools, well-represented and respected in the trades, has announced their new KTB5 portable power station. While it’s sized like the boom-box you used to carry around in high school, instead of blasting sick beats this tool “blasts” electric power to your electronics, lights, fans, battery chargers, and small battery-operated tools – 546 Watt-hours of power, to be precise. Additionally, the power delivered is of the pure, clean sine-wave type – not the dirty kind your mother warned you about. Check out the available options for plugging in your devices:

Closing out this edition of TNN is a new garage door opener from Chamberlain that promises to solve a longstanding problem. It’s the year 2019 – and the great garage wars are still being waged. Homeowners have won some hard-fought battles against the “garage-mess” nemesis by installing shelving units, hanging their bikes on the wall, and *gasp* even making room for a car or two. The final front of this war is the aerial one though – how can homeowners fight back for the territory currently controlled by their old garage door openers?

Chamberlain adds a new weapon to this fight – the RJO70 Wall-Mount Garage Door Opener! This unique device mounts alongside the door, rather than on the ceiling – clearing up the space that would otherwise be taken up by a regular opener. In addition to saving space, this device also has smart-home capabilities such as app-control, battery back up, automatic garage door lock, and smart LED lighting. The tide might finally be turning against the mess.