I’m not sure when it happened. At some point in the last two decades a conspiracy secretly plotted the future storage of all tools. Backed by the multi-zillion dollar bucket and bucket accessory lobby, the goal was simple: one by one, to replace all prior forms of tool storage (even the venerable tool box) with five gallon buckets. The conspiracy was powerful, and soon, everyone from weekend warriors to professional contractors could be seen toting around their tools in a five gallon bucket. People seemed content, but were they really? Eventually, a few people started to ask themselves, “Why the eff am I carrying around all my tools in a bucket with an apron on it?!”

I too, became one of those to question the masses using tool buckets as tool boxes. For years I’ve had a bucket and “accessory” that stored an odd medley of tools I’d tote around the house for various projects. It was handy. But it was also problematic. My tool bucket collected a special assortment of wood chips, sawdust, nails, screws, small rodents and anything else unlucky enough to fall into the bottom of the bucket. Despite being a little over a foot tall, the base of the bucket might as well be the bottom of a deep well. Finding and retrieving anything below the top layer was a true challenge.

Another one of the people to question the tool bucket trend was Roger Brouard, inventor of the Veto Pro Pac series of tool carriers. Veto has been very active in the media world, and they offered to ship out their Veto Pro Pac LC for a HomeFixated review. After testing it for a couple months, we think the Veto Pro Pac might mark the beginning of the end for tool bucket supremacy, at least for those willing to pay for it.

The Veto Pro Pac Model LC is 13.5″ wide, 9.5″ deep and about 11.5″ tall. It sports 57 pockets and can hold over 75 hand tools. A patented center panel not only forms a nice divide between the two sides of the bag, but it also helps keep everything upright. The center panel also culminates in a very rugged carry handle. The handle has a nice grip on it and is pretty comfortable, even with some weight in the bag. If you compare the handle’s comfort to a five gallon bucket handle, you’ll no doubt find the Veto handle infinitely more ergonomic. A waterproof base made from 3mm thick polypropylene ingeniously makes the bottom of the LC impervious to moisture. This feature is great for crawl space adventures and those little plumbing projects that accidentally turn into floods. The sides feature a very accessible clip for your measuring tape and a couple pockets for a pencil and utility knife. Little hyper-user-friendly details like these all add up to make the Veto Pro Pac LC a very carefully thought out product. To say the build quality is solid is a bit of an understatement. The 1800 denier body fabric appears downright bullet-proof (please note HomeFixated lawyers emphatically state we are not suggesting you shoot at your Veto Pro Pac). Speaking of bullet-proof and shooting perfectly good tool storage, we were talking with a couple of our buddies over at ToolsInAction.com, and it turns out they literally fired a couple hundred rounds at a Veto bag. Check out the video for yourself. The Veto held up very impressively despite the barrage of rounds from an AR-15, shotgun and more:

Special note to US presidents: Do NOT draft Dan into any front-line military service under any circumstances! 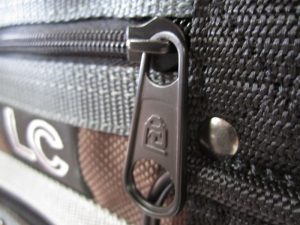 Marine-grade rivets abound, and beefy zipper pulls make unzipping and zipping do-able, even with gloves on. We did find the zippers would bind occasionally, but they’re so sizable getting back on track is a breeze. As you might deduce from people-watching at McDonalds, with beef comes weight. Don’t expect an ultra-light, minimal case here. We weighed the empty LC and found it weighed in around 7 pounds. We did find that one nice byproduct of that weight is that the LC is less likely to tip over.

If you find your loaded Veto Pro Pac is more than you want to bicep curl, Veto thoughtfully included a nicely padded shoulder strap. They even put velcro on it and on the top of the LC so you can “park” it out of the way. Small, velcro circles are sewn into the area below the LC’s handle, and the large band of velcro on the strap itself make it easy to keep the strap from annoying you. It’s downright ingenious! Who wants a shoulder strap standing between you and your tools anyway? 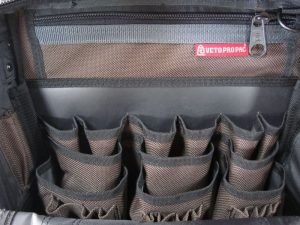 As an obsessive organizer, I also greatly appreciated the two identical sides. This makes it easy to separate two types of tools easily. One side might be for electrical, another for carpentry, plumbing, etc. Varying pocket sizes make storage for everything from bits to small cordless tools a snap. Speaking of snaps, Veto even included snaps on the zip down pockets for each side. These snaps let you roll the sides out of the way for unrestricted access to your tools. Its another great feature for keeping tools visible and within easy reach.

If you’re ready for a serious alternative to the 5 Gallon Bucket organizer, check out the Veto Pro Pac’s full line of closed and open-top models. The Veto Pro Pac LC runs about $129 straight from Veto. More spendy than a bucket apron, but worth it if you value your tools and efficiency. Just try to resist the urge to shoot it with your assault rifle, OK?