Upwards and onwards! This could be the rallying cry for vine lovers everywhere. No, not wine lovers. Even if I will discuss growing grapes later on in this article, that’s a different ballgame altogether. I’m actually talking about growing climbing plants, which are a great option for small space gardeners. Vining plants are very versatile. (Try saying that ten times fast). Some have beautiful flowers, others smell good, and some are edible. Read on for some vining plants worth considering, and some vine growing tips in general.

Then there is kudzu, a highly invasive plant best known for eating entire counties. Most other perennial vines have to be planted but this one sprouts almost by magic. The trouble is that it is not something that you want in your garden. I advise extreme measures and prayers to the deity of your choice. Just don’t expect the kudzu to go quietly into oblivion. Once it takes hold of a yard, it puts up a good fight. However, there are more benign vines that you can add to your garden without any struggle at all. The following are some of my current favorites. 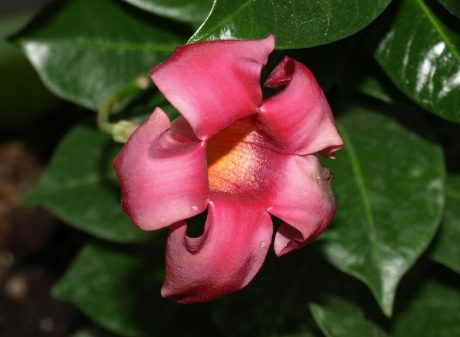 Mandevillas are tropical perennials. In human terms, this means that they can only spend the winter outdoors if you don’t mind losing the occasional plant. If the winters get cold enough, the mandevillas will die. Considering that the plants normally cost $10 or more dollars, the best option is to put them in containers and bring them indoors for the winter when it starts getting cold rather than risk losing them. 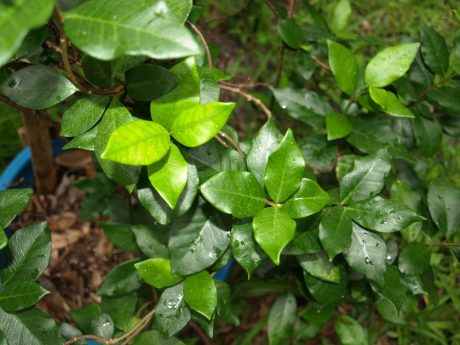 The plants in my yard tend to be either edible or aromatic. Some jasmines are both. Although I have personally never consumed it, jasmine tea is a popular drink in some portions of the world. I keep the plants around for their lovely fragrance which is made even more pungent by the humid summer nights that are so common around here. Confederate jasmine (shown above) is pretty popular here in the South because it can be left outdoors all year and it produces a plethora of flowers that can be smelled halfway down the block. However, I’ve never seen anyone eat it.

Of course, there are many different types of jasmine. I also own an Arabian Jasmine (Jasmine Sambac), which Wikipedia says is one of the varieties used to make tea. It’s from the tropics and has to be brought indoors in the winter, but it isn’t as picky as some plants are about lighting conditions. I usually set my 5 year old plant inside under a window during the colder months and water it every so often until the temperatures start to rise. Aside from taking it in and out, it’s a fairly low maintenance plant. 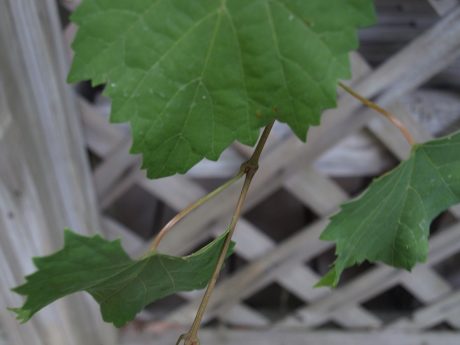 I bought a muscadine grape about a year ago when I found them on sale for $6 each. Although the one I purchased was self-pollinating, I have yet to get more than teensy fruits that fall off the plant at the slightest provocation. My theory is that either I’m not watering enough or the plants aren’t getting enough sun. At the moment, I’m trying to keep the vine from attaching itself to the plants I’ve got growing around it. However, pet owners need to be cautious when adding this one to their yard. Dogs in particular cannot eat grapes (or raisins) because the fruits can cause their livers to fail. When grown right, grape vines can be both prolific and delicious, just not for Fido, OK? 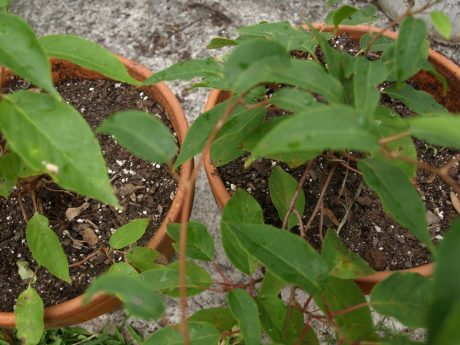 I couldn’t find any self-pollinating kiwis when I went to buy them so I ended up with two in the picture. Not counting shipping and handling ($10), the plants set me back about $10 which I felt was a very reasonable price. Although they were supposed to produce fruit this year, I’ve seen no signs of activity but our recent move was stressful for both plants and human beings. However, the kiwis do not seem prone to cantankerous behavior and they’re growing at a decently fast rate which leads me to believe that my plants will eventually bear fruit. It’s only a matter of time. 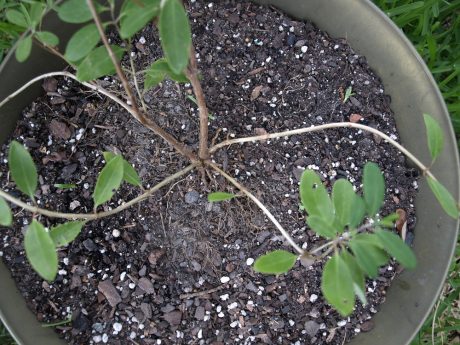 There are a lot of noteworthy vining plants that gardeners should also try. I personally have been searching for affordable purple clematis for years because I find $15 too much to spend on just one plant that might not survive the winter. However, I did get the honeysuckle shown above several years ago for $3 as an impulse purchase with a larger order from Wellspring Gardens. This reportedly native specimen was a good choice because it has had no pest or disease problems since I received it and it needs no special care. Mine has yet to bloom but I attribute this to the fact that it quickly outgrew the container it was in and I had no others to spare until recently. So I’m crossing my fingers and hoping for the best. Wisteria and hops are also worth looking into.

Where to Grow Vining Plants – Trellises and Other Structures

Anyone that buys a vine for their garden should definitely invest in a decent trellis or arbor so that the plant has have a place to hang out. Of course, you can make your own support structure if you like and there are lots of places online that describe exactly how to do that. For any Home Fixated readers that are not the DIY type, the premade trellises found at the garden center are probably a better option. However, I’ve also used tomato cages for a temporary fix for escaping vines with good results.

Letting climbing plants go up porch railings, fences, or gates is another easy way to keep them from sprawling everywhere. Besides, doing so is a very good way to disguise ugly chain link fencing. The downside is that vining plants can get heavy over time and they can eventually compromise the structural integrity of the structure in question. I had a jasmine plant that climbed on a low hanging power line. It could have been a shocking situation. Fortunately, the plant didn’t seem to mind a trim. The same could not be said of a mandevilla that got too attached to the porch railing. Like Romeo and Juliet, they could not live without each other and a tragic death took place in fair Savannah where we laid our scene. So be careful be where you let these plants spread out.