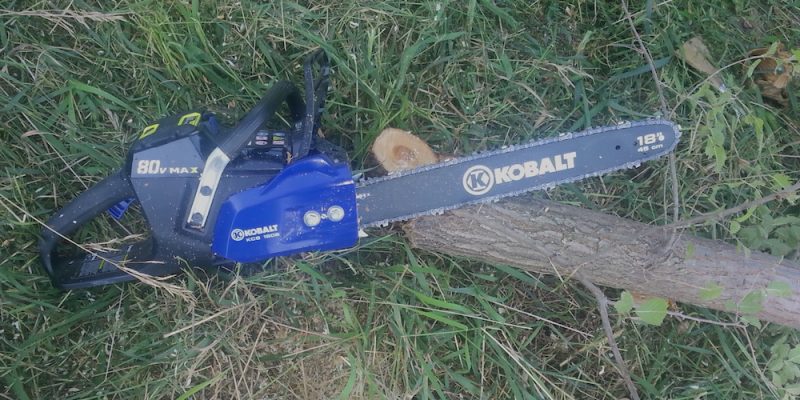 Last month, I tried out two of the new line of Kobalt 80 volt MAX cordless lawn tools, the mower and string trimmer. I gave them a serious workout – to coin an old (and politically incorrect) phrase, I “beat them like a rented mule,” and they stood up to all of the abuse that I dished out. This month, I’m taking the 80 volt MAX 18” cordless chainsaw out for a day of work around the farm. How will it stack up against other electric chainsaws, and more importantly, my 18” gas saw?

As I said in my review last month…I am a guy who loves the IDEA of electric yard tools. BUT, after seeing a LOT of underperforming electric lawn equipment in the past, I approach them with a good deal of skepticism. Kobalt was nice enough to provide their new lineup for this review, and the mower and the string trimmer were a really big (and pleasant) surprise. Out of the box, the chainsaw, like the other tools, felt very sturdy. The 80 volt battery, which I have nicknamed the “power brick,” adds some heft to the saw. Like my gas saw, it is just under 14 lbs. The balance is very similar to a traditional chainsaw.

Now, this is not a lumberjack chainsaw, but it does do a really good job trimming trees, clearing small saplings, etc. I cut down a couple of sizeable Mulberry trees, and did not feel at all that the saw was underpowered for the job. The battery lasted long enough to get the trees down and cut up. Of course, charging and swapping batteries is not going to be convenient out in the timber or woodlot, but around an acreage or large yard, this is a great saw for occasional use. In terms of performance, it definitely belongs in a class with gas chainsaws, rather than older, wimpier electric models.

Swapping batteries may have it’s downside, but getting away from a gas saw certainly has a huge upside as well. For most peeps, owning a gas chainsaw means keeping the gas tank cleaned out between uses, or risk a major butt-pain of getting it started on those rare occasions when you need it. No such problems with the electric model. Slap in a battery and cut. No yanking the pull start, no playing with the choke. I have to admit, I may have heard angels singing when I pushed the electric start button and pulled the trigger!

Another huge upside to this saw is the noise level…which is very, very low. In fact, when you aren’t cutting, it is silent! Amazing! A typical gas chainsaw screams at 110 or 120 decibels. In my highly unscientific evaluation, this saw is about as loud as a household vacuum, which runs at more like 70 decibels.

One VERY important point to remember though – no chainsaw, not even an electric one, works without oiling the chain. At least, not for very long. Although you may not be filling the gas tank, you still need to keep the oiler filled up! Get in the habit of topping off the oiler each time you swap the battery.

Here are the specs on the saw:
80-Volt Max-Volt Lithium Ion (Li-ion) 18-in Cordless Electric Chainsaw

The Kobalt 80v Max Cordless Chainsaw is available at Lowes for around $299.