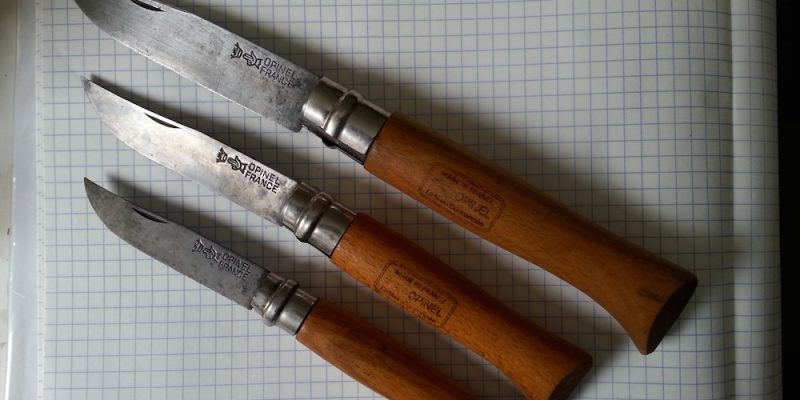 Leatherman? Got one. Gerber Multitool? Yup. Engineering miracles, they are. But what is the one tool that I go for most often? My pocket knife. And not some fancy-pants Swiss Army knife with a million gizmos. A plain, old-fashioned pocket knife. Believe me, I love my gizmos, but sometimes simple is best! Check out this roundup of 4 vintage pocket knife classics every knife fan should know.

Doing a little research on the history of the pocket knife, it would appear that the pocket knife actually probably predated the pocket, and they possibly even predate pants, ironically enough! Folding knives have been discovered by archeologists that date back to the iron age, made with antler bone handles.

Pocket knives were some of the first mass-produced items, and popular folders known as peasant knives or penny knives came out of the legendary cutlery cities of Sheffield England and Damascus in Syria as far back as the 1500s. It was the onset of the industrial revolution, though, that really made pocket knives handy for nearly everyone.

For many American boys and girls who grew up in the glorious days before safety was invented, being allowed a pocket knife was the first step to adulthood. When I was a young man and coming-of-age, many of us still received the Barlow knife sometime after the age of five. The Barlow dates back to the 1600’s and was made originally in Sheffield by Obidiah Barlow, but was later made in the USA. The simple, sturdy cheap Barlow was carried by George Washington and made legendary by Mark Twain, who wrote about the Barlow in The Adventures of Tom Sawyer: “Mary gave him a bran-new “Barlow” knife worth twelve and a half cents; and the convulsion of delight that swept his system shook him to his foundations. True, the knife would not cut anything, but it was a “sure-enough” Barlow, and there was inconceivable grandeur in that …”

Later in my boyhood, the Swiss Army knife became popular, and despite the fact that the stainless steel blade never took an edge terribly well, the corkscrew did come in handy later in college. AND the tweezers and toothpick were just nerd-tastic by any standards.

By the 80’s, I was working construction, and the Buck knife was the knife du jour. With it’s sweeping point, locking blade and nifty leather sheath, it was a workhorse. After that, the big game changer was the Leatherman, which opened the floodgates for the myriad of imitators that were to follow. As I said before, I do love having those pliers at hand when I need them, but honestly, the rest of the bells and whistles generally leave me underwhelmed. I do carry one in my laptop bag for emergencies, though, and when you need them, multitools are great.

Nowadays though, I have gone old school when it comes to my regular pocket knife. I don’t really go for the tactical folder with the thumb stud or the pocket clip. I generally carry one of two old-timey blades. The first is a 1940s Camillus electricians knife. It’s probably a WWII veteran, and features one carbon steel knife blade and one screwdriver/wire-stripper blade. It has a dark brown bakelite handle, a brass locking mechanism for the screwdriver blade and a shackle, to which I added a lanyard made from a braided bootlace. Stylish, right? The other is an Opinel, which is a classic French knife that truly fits the description “peasant knife.”

If you have never seen an Opinel, it is really a beautiful design. With its simple, single carbon blade, beechwood handle and a locking collar ring, “opinel” has become the generic french term for a folding knife. Selling in the USA for under ten bucks for smaller models to under $20 for larger models, you can’t go wrong with an Opinel. Although they now make stainless blades, I prefer the traditional carbon blade, which sharpens to a razor edge in seconds. You can buy a fancier knife, or a more expensive knife, but I don’t know a real knife nerd who doesn’t love their Opinel. Virtually unchanged since the factory opened in 1890, this is one of those designs that simply needs no improvement. I have abused Opinels to no end… broken off the tip, and simply reground it. Nicked the blade stripping wires, and sharpened it as good as new. I even left it in the sink after peeling an apple and forgot about it overnight and after some steel wool and oil, both the blade and beechwood handle looked even better than before!

The Barlow, the Buck, the Camillus Electrician’s knife and the Opinel are just a few of the great classic pocket knives out there. I love to pick them up at flea markets or thrift stores, and they are usually cheap. You can even pick up a new Opinel on Amazon for an amazing price of around $13 via the link below. But be careful… pocket knife collecting can get addictive!