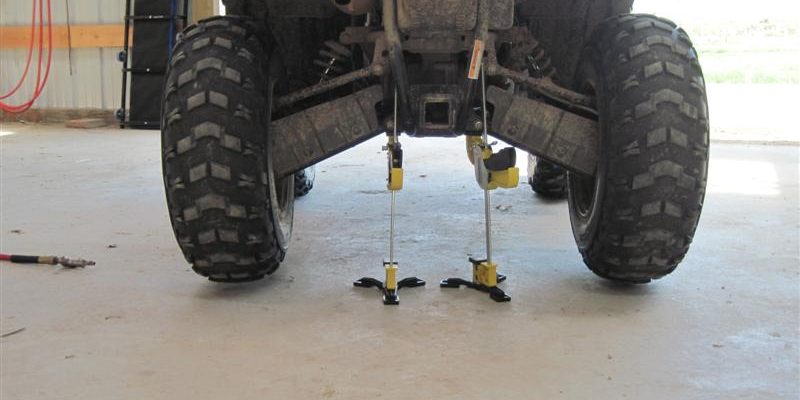 Obvious “you don’t know Jack” joke deleted for unoriginality.  Glad we got that out of the way.  How is this for a review:  If you have any interest at all in woodworking you need to own at the very least a set of Jack Clamps.  HomeFixated.com was sent a set of these to review, and somehow I ended up with them.  I ought to just keep my big mouth shut since I may have to send them back for a “second opinion” from Marc, but–I could always just claim I lost them.  (Not likely).

Once I had opened the box I noticed right away that these weren’t your average clamps.  They really didn’t look like anything I had seen before.  Normally I am pretty up on what is available, so I was a bit surprised to notice the Jack Clamp was pretty unique.  My annoyance quickly went away when I found out the reason I hadn’t seen anything like it is because:  There isn’t anything like it.  There simply isn’t another clamp on the market like the Jack Clamp.  Good stuff.

First impressions are huge with me.  If something looks funny, chintzy, or gimmicky–I have to admit I do take it with a grain of salt.  At first, I couldn’t help feeling that way as I fiddled around with the Jack Clamps, and tried them out in their different configurations.  I was solidly on the “gimmicky” side of the fence when I started–but had to admire the way the clamps were built.  They felt heavy, (3 lbs. a clamp) and solidly built.  Ok–fair enough.  It is because they are.  Hardened steel, and glass filled nylon plastic are what Lowell Thomas Tool, Inc. makes the clamps out of.  They claim that it would take 970 lbs. to break off the steel and plastic jaw–I’m inclined to believe them since I have used methods to get more out of the clamp than I can physically do.

The nuts and bolts of the Jack Clamp are pretty impressive too.  Adjustable throat depth up to 12”, it will spread to 34”, an adjustable upper bar, vertical and horizontal level vials, 18” standard ruler/straight edge–flip it around for a 44mm Metric ruler.  The four internal brakes are double what comes on similar clamps.  The clamp won’t slip when under duress like other clamps.  Lowell Thomas Tool also has a lifetime warranty on workmanship, and rather than have you hate their product–they’ll buy it back from you. I think any tool haters for this product are unlikely though.

Another thing that I am impressed with–and this is purely me:  Lowell Thomas Tool, Inc. is a true locally owned company.  Their manufacturing facility is in Bozeman, Montana–and they ship from various distribution points all within Montana.  It is really nice to see a local company do well–and I wish the best for them.  This has nothing to do with me being from Montana as well–and everything to do with getting back at “the man”.  I like seeing small companies produce quality products right here in the good ol’ US of A.   /end militia rant.

For the last few weeks I’ve been at the family ranch in central Montana.  I’m helping with various ranch things–like driving tractors and such–but most of my work has been in the kitchen.  No, not cooking–but remodeling.  When I am out in the shop–I take my fair amount of flak from the ranch hands about my “little carpentry” and the “house work” I’m doing.  When there are a couple of Copenhagen spitting cowboys in the shop welding on tractors, trucks, and doing tough cowboy stuff–yeah–I feel a little out-manned.

That all changed when I went out there with my Jack Clamps.  You could tell they were a bit curious–but I wasn’t about to give them the satisfaction of letting them in on my “housework”.  I have used the clamps for everything from clamping up a butcher block, to setting counter tops, and jacking a cabinet into position.  These things are sort of like having another set of arms.  What really got the cowboys going was when I mentioned I was writing a review–and we ought to try and break them.  Breaking stuff seems to get these guys all kinds of fired up–so we started doing stuff to the Jack Clamps that you’re not supposed to.  Like…jacking up trucks and four-wheelers. 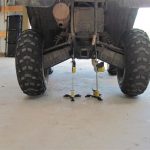 We were able to jack up a half-ton pick up an 1 1/4” (with dogs in the box!) and using the foot attachment hoisted the four-wheeler rear tires clear off the floor.  It was pretty impressive–and the Jack Clamps showed no ill effects when we were done torturing them.  In fact–I think with that demonstration I just became the unofficial Jack Clamp salesman for the ranch.  Both of the cowboys were all of a sudden wanting their own set–especially once I mentioned and showed them the accessories. FYI, these torture tests were done in the line of duty for HomeFixated. They definitely fall into the “Don’t Try This At Home” category.

You can quickly change out the rubber ends on the clamps (resistant to most wood glues) and put on a foot, a V-jaw, and a spreader.  With the V-jaw you can easily hold square metal stock, or even pipe–which perked up the welding cowboys.  Jack Clamp also will have a bar in the future for clamping applications larger than 34”.  I will be looking forward to that–and if it is long enough:  Good bye expensive pipe  clamps.  (The last set I bought was $30 per clamp–not including the $19 for galvanized pipe to make the clamp).

For $59.99 per clamp at first blush they do seem a bit pricey.  Since I’m buying clamps–I am buying it for the clamp and not the ruler, straight edge, or truck lifting capabilities.  The upside is:  I seriously doubt you can find a better constructed or more versatile clamp on the market.  What did I hate about the Jack Clamp?  Uh…the color?  The fact I only have two of them?  Really–there isn’t much not to like on this tool, and that is the best marketing you can have…a tool that does as advertised, is solidly built, and just plain works.

You can get your Jack Clamps direct from Lowell Thomas Tool — and if you don’t like it, I might buy it from ya.