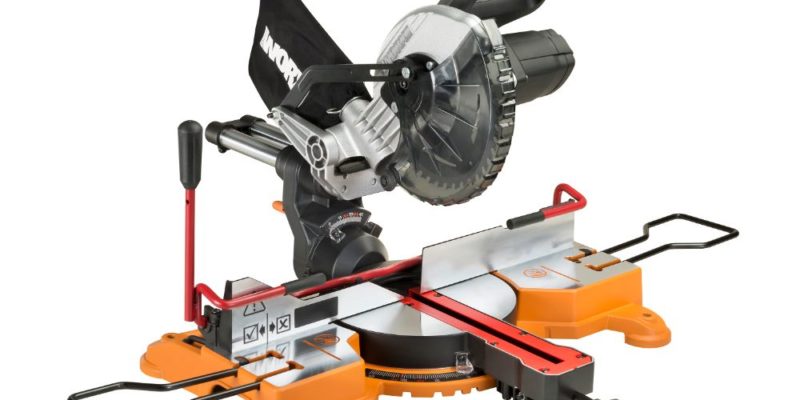 Tool industry up-and-comer, WORX, just released their very first benchtop saw – the 20V Power Share 7-¼” Sliding Compound Miter Saw. Known more for their impressive line of outdoor power equipment, WORX has really been stepping their game up with handheld power tools as well. The Power Share 20V battery platform is great in that it can be used across their entire line. From yard tools to woodworking tools to cleaning tools, you’re covered.

Now, with the new WX845L sliding compound miter saw, WORX is looking to plant a flag on your benchtop as well. They’ve already tamed your yard and tool chest, after all, right? With a 7-¼” blade, it can handle most common household cutting tasks, such as crosscutting 2x4s and 2x8s. It can also handle more specialty cutting jobs, including crown molding, trim, window casements, picture frames, and more. The maximum depth of cut is 2-¼” at 90°. For miter cuts, there are positive detent stops from 0 to 47° left/right. For bevel cuts, the saw can rotate left between 0 and 45°.

It’s equipped with a 4.0 Ah Power Share battery, which, as mentioned before can be used in any of the other Power Share Tools. There’s a precision shadow cut line, which I’m assuming must’ve been prototyped by Batman himself. Other features include an LED work light, a dust bag, a 1-5/8” dust port to hook up to your vacuum, an ergonomic D-shaped handle, and a slide mechanism with enclosed linear ball bearings.

An innovative safety feature on this saw – the likes of which we haven’t seen before – really caught our eye. Typically, when using a miter saw of any type, the user has to hold the wood against the fence with one hand while operating the saw with the other. This is perfectly safe most of the time. Sometimes, though, like maybe when making a highly angled or oblique cut, it might be possible to lose sight of your work-holding hand. Obviously, there’s a chance for injury in such a scenario.

The WX845L has solved that problem with an integrated work hold-down lever. It extends the entire length of the fence to clamp the workpiece on both sides of the blade. The user simply has to operate the lever with their left hand before starting the cut, and it holds the workpiece against the fence for the duration of the cut, keeping the user’s hands away from the blade. We like this – making an intimidating tool for some users slightly less intimidating.

What’s really great about WORX, besides this new saw, is their commitment to innovation, quality tools, and keeping prices low enough where they’re not off-putting to those who may just be getting into working on their own homes. Inspiring homeowners to tackle their own projects is kind of our thing here at Home Fixated, and any company that facilitates that is A-OK in our book. Looks for the WX845L now.