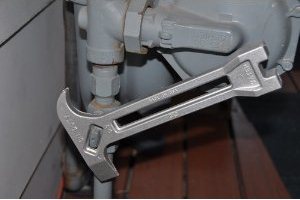 For when things get dicey, there certainly is a place in the home for a multi tasking do-it-all tool like the 4 in 1 Emergency Tool by Emergency Disaster Systems. Emergency Disaster Systems are the guys who can provide you with any kit, contraption, tool, or device you could possibly imagine to handle any godawful thing that could happen in your life.  Living here in Southern California, we have earthquakes and fires on our minds as a common occurrence. When nature pulls a fast one, and you need to act fast, it helps to have the right tool at hand. No Marc, I’m not talking backup beer bottle openers here – this is the real deal – an official emergency tool!

All right, upon further review, and considerable research, this bad boy does do a very good job opening bottles of Corona, Dos Equis, Pacifico, Bud, Coors, and Miller. Obviously these are not emergency situations in the normal sense, but still… So now I think this should be called a 4 in 1 Emergency Tool With Benefits! Perfect! But on to the more serious stuff: this tool has fittings for your gas and water shutoff valves, plus a hook to lift off the water meter cover. It won’t spark, so it’s safe for gas, and because it won’t rust, it can be left outside near the gas valve – right there when you need it. It appears to be sturdy enough to pry, dig, or whack things with it too. It would probably be a respectable addition to your Zombie Apocalypse Kit too.

I certainly don’t want to trivialize the importance of being prepared in an emergency. The Northridge earthquake, the Malibu fires, and most recently the fires in Colorado and Utah are a constant reminder that disasters can be around every corner.  While the 4 in 1 may not put out a house-consuming inferno, it does do a lot when you’re in a pinch and you’re in need.   Let’s say you have the usual list of emergency preparedness must-haves: bottled water, canned goods, flashlights, candles, and so forth, and some cash stashed away for those dark days that can come with no warning, but a couple of really useful tools, the 4 in 1 included, should be thrown into the mix too.

This tool got me thinking about what “other” tools one should have in an emergency pack, so I called my mom and asked her what she and dad had for emergency tools, and Mom just laughed. “My God Brad, your father has every tool known to man, and then some.” I decided the conversation was going nowhere so I ordered the 4 in 1 tool and sent it to her. It does do these clever things that my father’s massive store of tools may not do, like whacking or prying, maybe.  And Mom always likes it when I send her stuff, so I can’t go wrong. Unless she takes it the wrong way… Oh s__t.

Speaking of emergency cash, I have found it’s better to have only one person in charge of the cash stash. A recent emergency of mine that required me to get my hands on some immediate cash had somehow been usurped by someone else who obviously thought HER emergency had warranted an unauthorized withdrawal from the cash stash. Confrontation proved futile as I was immediately shot down for attempting to do the exact same thing that she had done; raid the emergency cash-stash. Defiantly, casting my last salvo in defense, I said, “So how’re we gonna pay for the pizza? They don’t take credit cards, you know.” Tilting her head just enough to cast me That Look, she said, “You ordered it, you pay for it.” And then she went back to reading her New Yorker Magazine. Lesson learned, once again. It is futile to try to win.

I would have liked to have had the 4 in 1 on our recent trip to New York, where my beautiful wife’s daughter lives. Their, shall we say, “classic New York” apartment is a fourth floor walkup in Inwood Hill Park in way upper Manhattan.  The only word I can use for the apartment is “charming.”  And it is, really – green trees and views out of windows on both sides of the unit, and a high-up look on the life down on the street below. We were offered the bedroom for our one-night stay, saving us around two thousand dollars or so, I’m sure.  (I left her $20 bucks under the emergency flashlight I left them as a hostess gift – seems fair.)

But – the Emergency Tool With Benefits would have come in handy that night as I lay in bed wide awake at 2:30 am (on a weeknight, no less), listening to a steady stream of local motorcycle yahoos who like to ride mufflerless up and down the street at supersonic speeds. A handy 4 in 1, launched with just the right velocity, could have done a world of good.  And hey, before you get all righteous on me, they do wear helmets. It wouldn’t have been lethal. Probably.  And think of the dings on their shiny fenders! More benefits, as long as I don’t factor in a surprise trip to Rikers Island on my NYC visit. In this case, it was good to NOT be prepared with an emergency tool.

So now I’m back in Redondo Beach, and I’m thinking kinder thoughts.  I’m getting a 4 in 1 for my next door neighbor who helped raise me when I was a kid. She wouldn’t be able to turn off the gas at the meter or the water at the street herself, but I certainly could do it, using her generously provided gift, when she next calls me with her own emergency.

This handy tool is a no-brainer. How lame would you feel running around looking for a wrench, when this could be hanging right where and when you needed it? Small price to pay for being a little more prepared. The 4 in 1 Emergency Tool

is available on Amazon for less than twenty bucks.

What I need next is a clever tool that can sniff out cash.  It occurs to me that my lovely spouse might have hidden her own cash stash somewhere around here. She wouldn’t, would she?