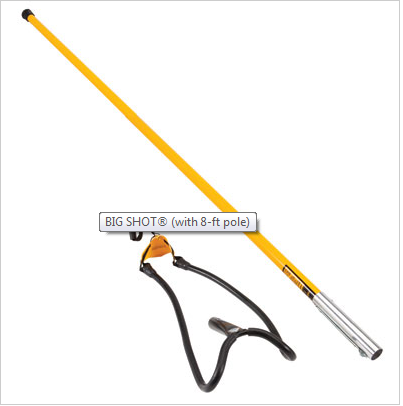 I think I may have stumbled upon the greatest thing ever. If I ever had a chance at becoming Batman this is it! The Sherriltree Big Shot Slingshot, is not just a gigantic slingshot. It’s also a tool. I’m sure that a number of you out there, like me, had slingshots when you were younger. But as you get older, it’s not really the kinda thing that people, or your wife, find acceptable around the home. However, since this is also a tool that could have important implication around the yard, I think it’s time to go shopping.

The true purpose of the Big Shot Slingshot is to get a leader line high into a tree or other object to pull a climbing rope up. If you have ever had a frisbee, ball or small child stuck in a tree, then you know how hard it can be to throw something up into the tree to get it out (don’t really throw things at your children, OK?). It’s nearly impossible to throw something straight up into the air with any accuracy. And forget throwing something at an angle because all you do is hit the very first tree limb. Here’s where the Big Shot Sling Shot comes in. By placing the pole on the ground you can shoot a weight attached to a leader line up into the canopy of the tree. Unless you are completely unlucky, the weight will lob over a branch and work its way back down. Once back down, all you have to do is attach a climbing rope to the lead rope and pull away. It sure beats the old ladder and looks cooler to boot. Although obviously geared toward professional arborists, I’m sure a few Home Fixated readers come up with (safe) but clever uses for it.

Now you maybe wondering how the weight works its way down? The Big Shot Sling shot can shoot up to a 20 ounce weight. If you somehow get a 1+ pound weight stuck in a tree, stand next to me because being so close to someone so unlucky has got to have some kind of yin and yang benefit to it. Unlike some of the other launchers that rely on pressurized gas or perhaps even crazier gun powered (because what you want is a small explosion to start you climbing), you have much more control over power and distance with the Slingshot. Oh, and if slingshots aren’t your thing, try the line reel. It’s an oversized Zebco mounted on a pole so you can work it like you used to fishing when you were a kid, except this time you’re actually trying to aim for the branches. Just remember to wear your cape and utility belt when you do! The Sherrilltree Big Shot Slingshot will set you back about $110 online.