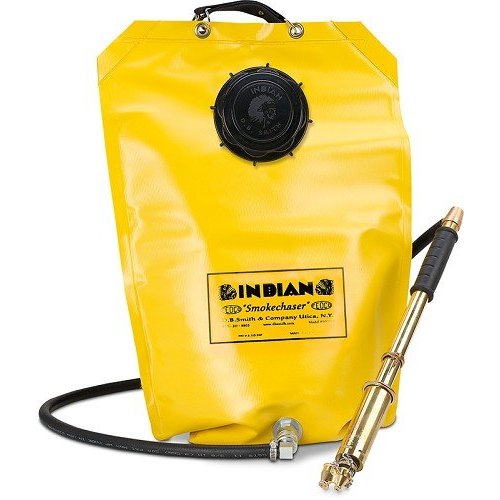 What do you get the guy in your life that has everything? Got an outdoors-y adrenaline junky that can’t get enough excitement? Or perhaps you’re a wanna be hero of the ages. Well check this out. A backpack fire extinguisher. It’s pretty sweet for sure. What looks like a cross between a yard sprayer and a Ghostbuster’s proton pack is a Indian Fedco 5 gallon collapsible fire extinguisher backpack. I can almost see Dan Aykroyd and Bill Murray doing the commercial spots for it now.

As the name suggests it fits on the back of a person and can hold up to 5 gallons of water and is used to, get this, put out fires. In actuality this product, also known as the Indian Smokechaser, is typically used for firefighters fighting brush fires. It’s a more compact version of their hard tanked backpack fire extinguishers. Since it’s collapsible, it can store more easily or in smaller spaces, making more room for other equipment such as axes, shovels, emergency med kits and more. While it’s marketed for those in the emergency service profession, it still has the potential to be a handy tool for the homeowner as well.

Unlike typical point and shoot and broadcast extinguishers, the backpack fire extinguisher has a controlled trigger and hand operated pump to increase pressure. Plus with a five gallon holding capacity you can continue to spray longer than the handful of seconds that a conventional fire extinguisher can. Besides, it’s much more practical if you’re out camping. Alright, I do concede that it’s not nearly as practical for household fires as a rechargeable extinguisher or even this sexy extinguisher. I mean, if you’re going to fill it first before using it, why not just use the hose to put the fire out? But, it’s still pretty cool and might have some useful functionality if you’re living somewhere on a large property. A hose can only reach so far.

Besides, who says you can’t be ‘creative’ with it? It doesn’t have to have water in it. Think about how many burgers you could baste with Worcestershire Sauce on the grill? You’d be the life of the party if it was filled with Guinness (use Guinness since its best served warm anyway). “Hello, mind a top off? Oh, no problem (pump, pump, spray)”. Yes sir, even without Dos XX, you’d be the most interesting man in the world. And you wouldn’t have to worry about crossing the proton streams! You can pick up the Indian Fedco Collapsible Backpack Firefighting Pump

for right around $150 via Amazaon.